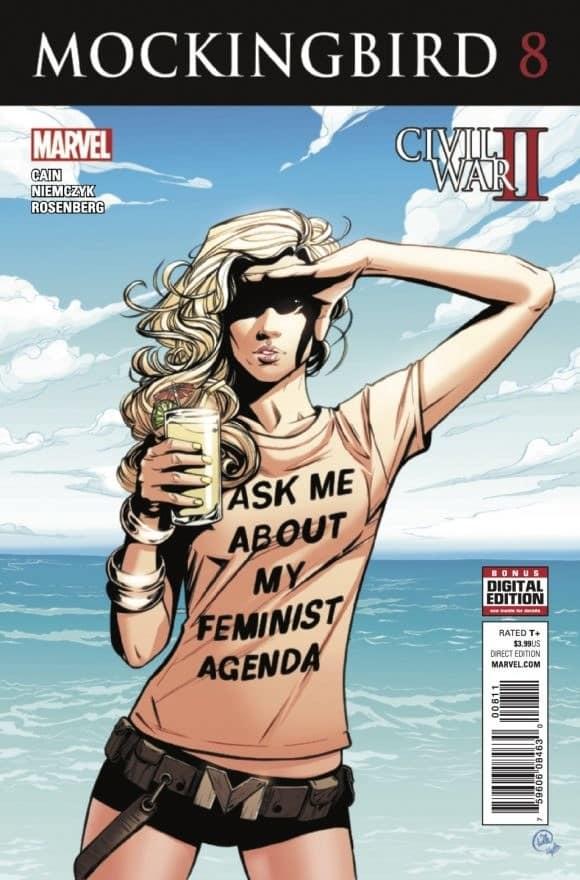 As if Gamergate wasn’t bad enough, now there’s Comicsgate as well, because people suck. And both of these supposed movements have people using these terms to refer to themselves, despite the fact that using “gate” in the names of scandals derives from Watergate, and no one involved in that bragged about it. One guy in a Twitter thread on the subject said they were trying to put a positive spin on it, but if that’s the case he wasn’t doing a very good job. From what I’ve heard, Gamergate started with accusations that Zoe Quinn had sex with someone to get a good review on a video game she made. Even if this really HAD been true (which it wasn’t), how is that even something worth making a stink about? Sure, it’s wrong, but things I don’t like get good reviews all the time, and I don’t threaten woman over it. The official line was that it was about “ethics in gaming journalism,” because…apparently that’s a thing? Maybe I’m showing my age, because I grew up with Nintendo Power, and we didn’t expect unbiased writing when it was published by Nintendo. So, yes, a bunch of people obsessively concerned with ethics were making death and rape threats. Okay. Comicsgate is about people thinking diversity in comics is a bad thing that’s causing a drop in sales. Yeah, people will say it’s not really about that, that it’s only about FORCED diversity and changing characters to meet a specific agenda. I’m not sure how that squares with the retailers’ panel at ComicCon 2017 where the sellers used slurs, and at least one complained that potential customers left his store “when they see that Thor is a woman and Captain America is a black man.” Yeah, because there aren’t anywhere NEAR enough comics featuring white male protagonists. The Marvel Vice President of Sales even blamed declining sales on diversity, despite how well Black Panther did at the box office. Of course, pretty much every long-standing comics character has been replaced or rebooted at some point, not to mention all the alternate-universe versions, child versions, and animal versions. I mean, a frog and an alien with a horse’s head have been granted the powers of Thor in the past.

But I guess those are all right because they don’t represent any ACTUAL minorities. And there were a lot of negative comments about a picture of female Marvel employees drinking milkshakes, because…they’re women?

One of the main supporters of the anti-diversity movement (such as it is) who’s actually worked in the entry is a guy called Ethan Van Sciver, and how does that not sound like the name of a comic book villain? Diversity doesn’t automatically make something good, and lack of diversity doesn’t necessarily make it bad, but it seems ridiculous not to even try. I mean, diversity of characters is always a good goal in fiction, because you don’t want all the characters to be the same. That’s not necessarily diversity in gender and ethnicity, but isn’t that another way to make your characters distinct? It’s not like you can’t identify with someone who’s a different sex or race than you, and on the other hand, readers are often glad to find characters similar to themselves. And it’s not like the original versions of these characters have disappeared; even the ones who have been replaced are generally still around in the background. I’ve seen people complaining that Marvel has said Captain Marvel would become a major part of the Cinematic Universe, and that this is some sort of SJW conspiracy. (To me, the fact that they even use that abbreviation without irony is probably enough reason not to take them seriously.) Never mind that she’s the first woman to headline a movie in that continuity, which hardly constitutes a trend. It’s still mostly white men! Can’t they give at least a little leeway? Besides, I like Carol Danvers. 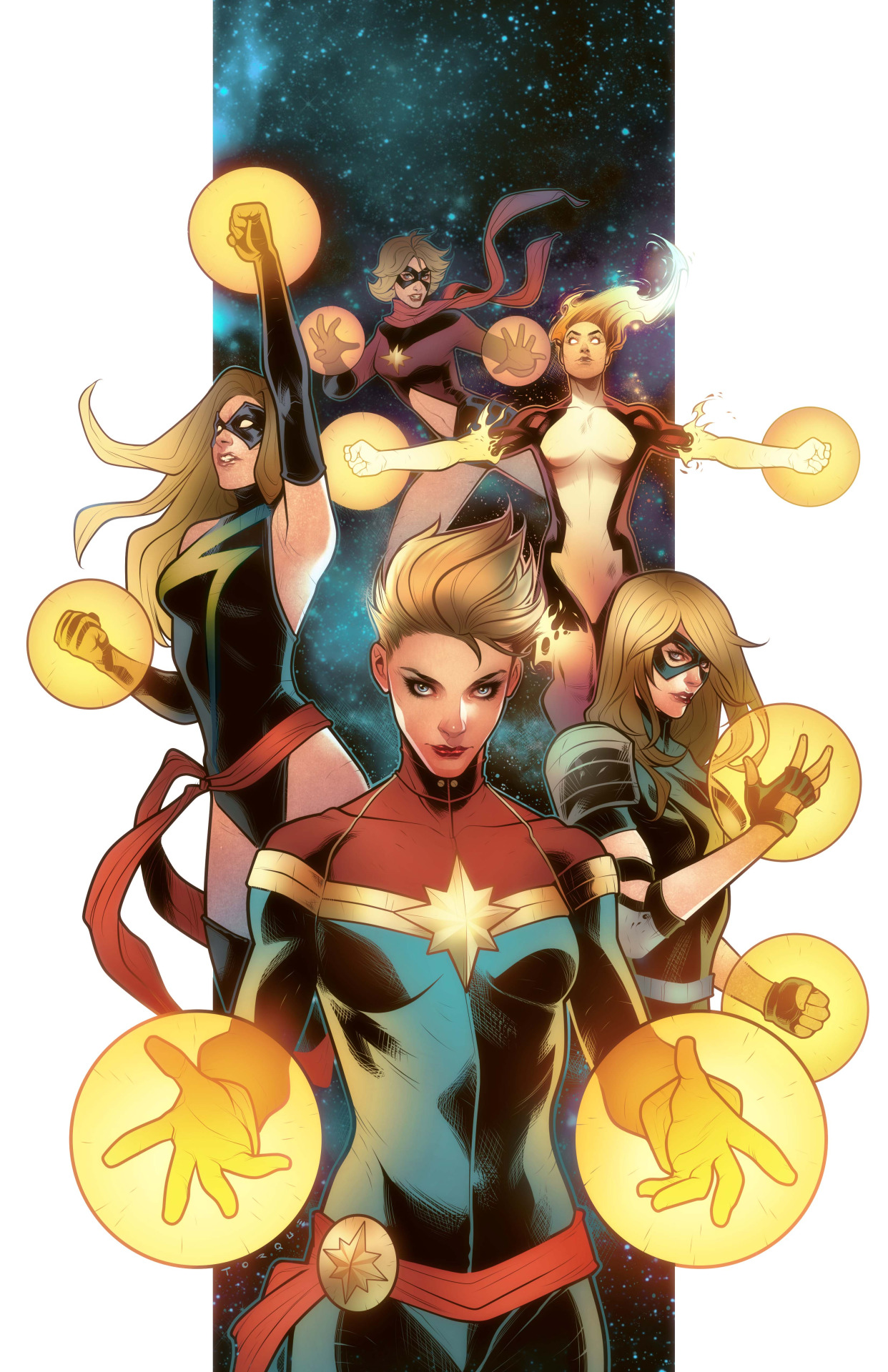 I’ve gotten a few of her comics on Comixology, and I appreciate how she’s both a nerd AND a bad-ass tough lady. She’s a Star Wars fan and is obsessed with flying and punching. If Marvel is supposed to be about superheroes with real-life personalities and problems, she definitely qualifies. So why wouldn’t I want to see her in the movies? Because I’m a dude and she’s not? I also recently read the Patsy Walker series from a few years ago. The character has an interesting history, having been the star of a teen romantic comedy comic from 1944 through 1967 who was then brought into the main Marvel Universe as a superhero in 1976. This series makes the old comics an in-universe thing, with Patsy trying to get back the rights to the books from her old frenemy and co-star Hedy Wolfe. She was also married to both a guy who was turned into a dog-like mutant mercenary and another who was literally the spawn of Satan, and those both figure in the stories.

I guess there is sometimes some valid criticism mixed in with the whining about SJWs. Like, when the Ghostbusters remake with women as the main characters came out, the majority of objections were from misogynists, but there were a few to the effect of why they needed to reboot Ghostbusters at all. I saw and enjoyed the reboot, and I still think that’s a good point. And it’s that weird kind of reboot where the creators ignore established continuity, but put in so many references to the original that you pretty much need to be familiar with it to understand anything, like with the most recent Star Trek films. And I have no problem with a female Thor, but it’s bizarre that she apparently actually IS Thor, rather than just having his powers. I mean, Thor is the guy’s name, right? That’s less like a new Captain America than a new Steve Rogers. 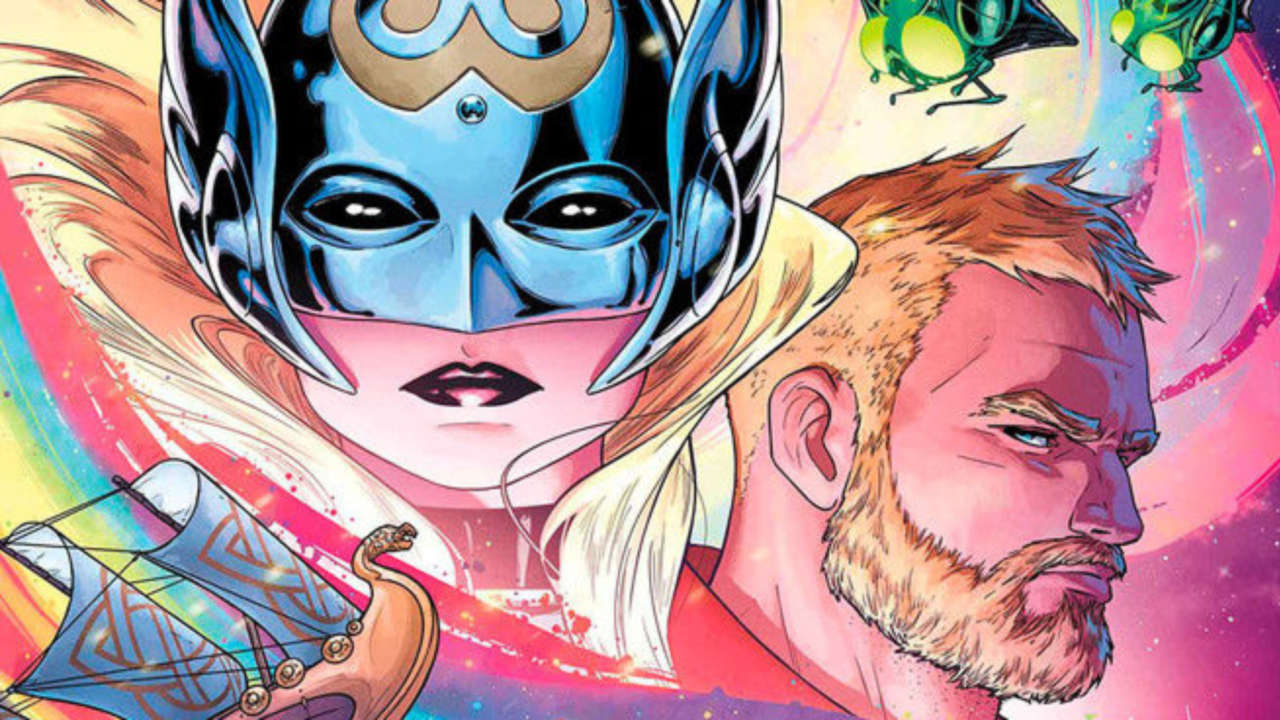 When the original Thor DOES appear, he tends to just be called “Odinson,” because not being worthy of Mjolnir means giving up your first name, I guess. To be fair, though, I’ve read some of the early Thor stories, and it seems like the writers could ever really decide whether Donald Blake WAS the Thor from the Norse myths or they just somehow shared the same consciousness, so I guess some other person becoming Thor makes as much sense as that does.