The Magic of the Written Word

Last week, I discussed signs that appear in the Oz series. This time, I’m going to look at a related topic, that of magical items or characters producing printed (or written; I don’t think it’s generally specified) messages, or accepting them from others. We see one of these quite early on when the Good Witch of the North’s cap turns into a slate that advises Dorothy to travel to the Emerald City.

This slate reappears to give advice to Prince Philador in Giant Horse.

Glinda’s Great Book of Records obviously also magically produces words, but it doesn’t seem to be something L. Frank Baum really used that much. In Ruth Plumly Thompson, on the other hand, such objects and characters are all over. Her second Oz book, Kabumpo, begins with a cake exploding, revealing a scroll with a warning from a certain “J.G.”, eventually revealed as the wizard Glegg.

Also in the cake is a mirror that provides a description, sometimes a quite insulting one, of anyone who looks into it along with their reflection.

Another bit of Glegg’s magic is a Question Box that, when queried and shaken, displays the answer. I’m not sure how much space it has, but some of these answers are pretty long. Lost King has Pajuka’s magic feather that writes a message in the Emerald City. And when Dorothy wishes for an explanation as to what’s been granting her wishes, her answer is printed on a card. The Hurry-Canes of Rash transport the bearer when provided with written instructions. It’s much the same with the Wizard’s Footpath in Gnome King, which normally runs to the Emerald City on its feet, but will also obey instructions written on a pad.

Since the Chief Scrapper writes his message while on the running path, it can apparently decipher sloppy handwriting. The Post Man in Purple Prince has to be directed through messages in the box on his back, because he’s deaf. In Ojo, a crystal ball in Crystal City provides answers and warnings.

One of the silver balls in Nox the Ox’s horn, provided by Himself the Elf, magically provides instructions on paper.

Also perhaps worthy of mention is, as per the Grand Chew Chew’s story in Royal Book, the crumpled parchment with the prophecy about the return of Chang Wang Woe that mysteriously appeared when the beanstalk did.

The difference between characters and objects can sometimes be a bit blurred in Oz. The Footpath and Post Man clearly have personalities and a certain amount of free will, but still function more as plot devices than characters in the stories. Then again, the same could probably be said about some of the human characters. The Menankypoos in Pirates are unable to speak, but communicate by flashing messages on their foreheads like illuminated signs. Clocker, the former Wise Man of Menankypoo, provides messages on yellow notes every fifteen minutes, delivered by a cuckoo bird that resides in his head. 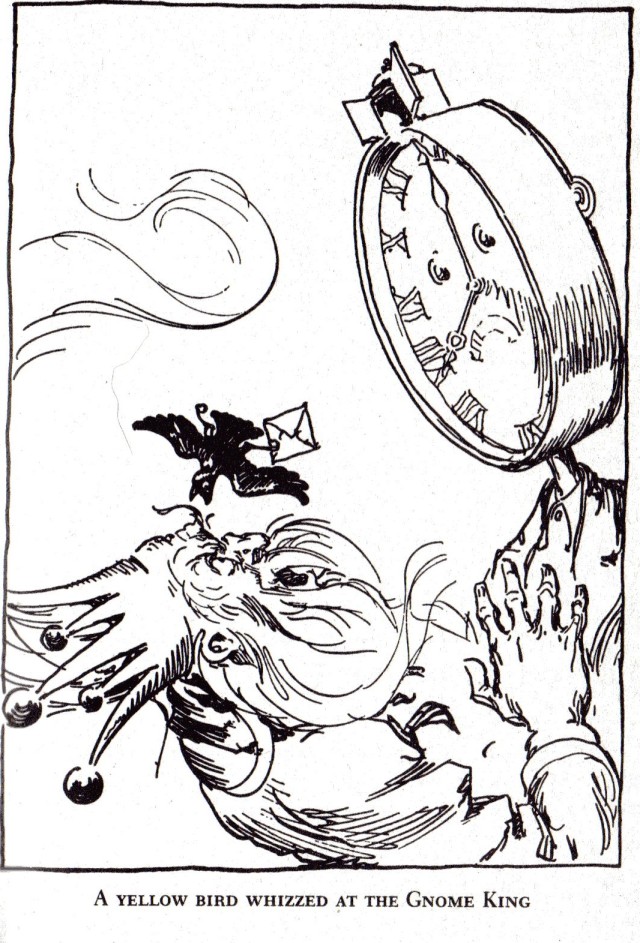 And several characters communicate through skywriting. One is Quiberon, who can speak normally, but spells out a message in smoke when he wants all of the Ozurians to see it. Thun in Silver Princess is initially unable to speak or hear, instead spelling out all his messages in fire.

After Jinnicky converts him to flesh and blood, he’s able to talk and listen, but still produces the fiery words as well. And I mentioned Bill Bored and his pipe smoke writing last time.

2 Responses to The Magic of the Written Word