Castle on a Cloud 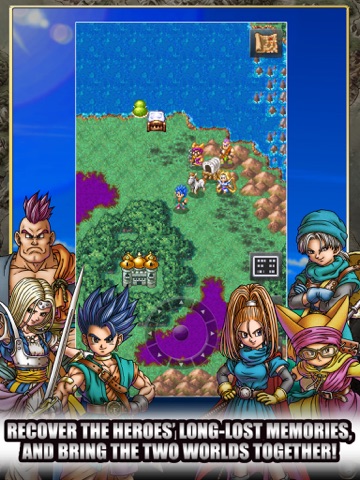 Hey, I’m writing about Dragon Quest VI when Dragon Quest XI has been out for a while now. I don’t have a system where I can play the new installment, though. I have a PC, but I think the graphic card isn’t good enough or something. I hadn’t played DQ6 in a few years, six according to this post, and I didn’t remember that much that had happened so far. I had explored almost all of the two worlds and gathered all the legendary weapons, but my characters still seemed pretty weak. DQ6 appears to be one of the less popular ones in the series, and I’m not totally sure why, but it does seem to offer fewer innovations to gameplay than any of the four before it. The conceit, as I mentioned before, is that it has two parallel worlds to explore, the real and dream worlds.

The latter is affected by perceptions and memories of people in the latter, so places that have been destroyed in reality can still exist in the dream world. It’s also a more whimsical place in other respects, notably that the real world gives you the typical ship and flying carpet as transportation, while in the dream one you get a floating island and a flying bed. Still, for a dream world, it mostly functions like the real one, so you’re basically trying to get through two worlds that are much but not exactly the same. There is a significant alteration to the job system that was introduced in DQ3, in that the classes are kept separate from experience levels, so you no longer have to start again at Level 1 after changing. DQ7 uses the same system, but with more classes. In both 6 and the PlayStation version of 7, you could keep all your skills and spells when changing, but the 3DS version of 7 only lets you retain some of them. I get why they’d do that, but I kind of think you should be able to keep everything you’ve earned, even if it does make things a lot easier.

The main villain in this game is the Archfiend Mortamor, whose main goal seems to be making people suffer, destroying their hopes and dreams. He’s not particularly developed, and mostly works through his hench-demons. After restoring Cloudsgate Citadel and Pegasus, you can fly to his home in the Dread Realm, a third world but not a particularly big one.

He transports people here in order to torment them, and upon first arriving there, your hit points drop to one and your magic to zero. That doesn’t last particularly long, and the chance of running into monsters is slim if you know where to go, but gimmicks like that often seem kind of cheap. It took me several tries to defeat Blackmar, Mortamor’s top general who maintains a prison in the Dread Realm, but somehow I was able to beat Mortamor himself on the first try, albeit not the first try at his castle. 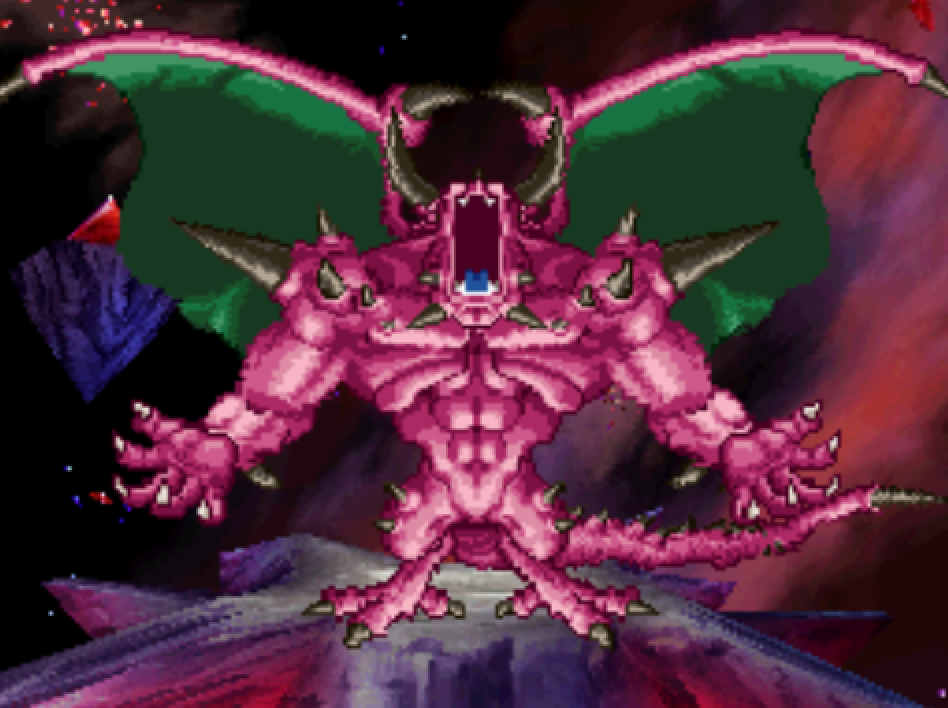 He has three forms, the last one and most annoying one being just a head and hands. 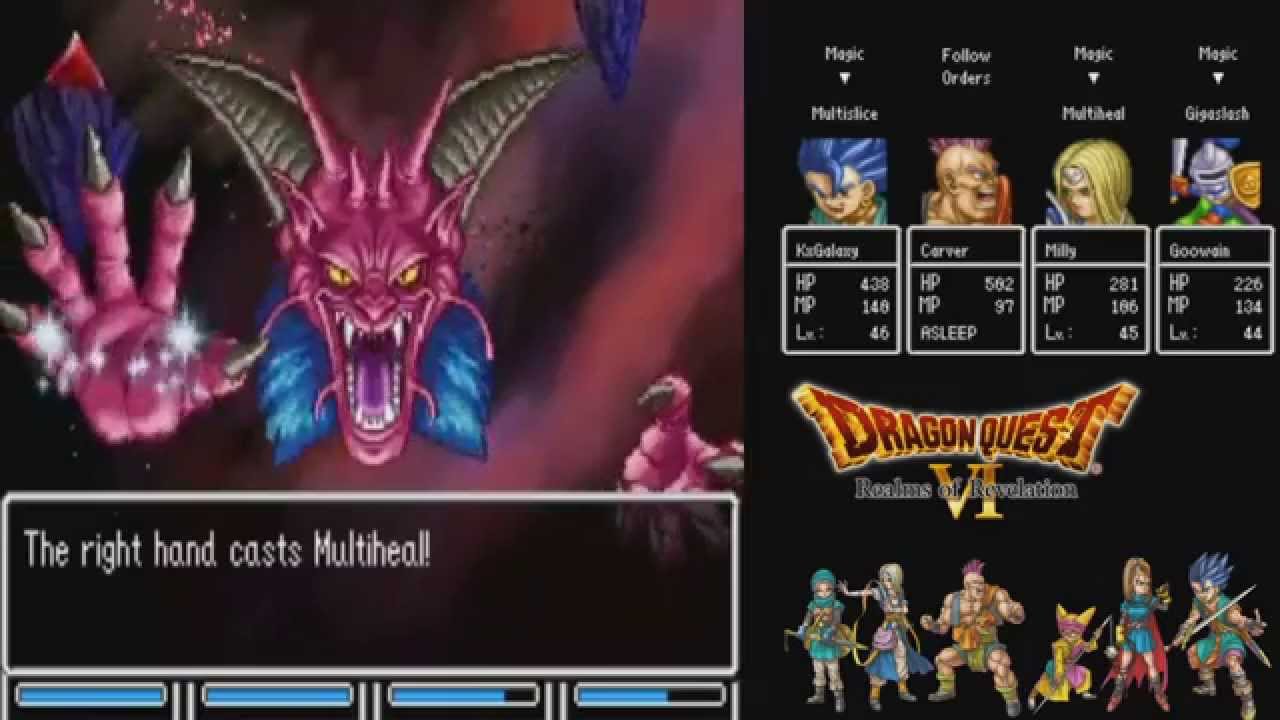 After beating him, you automatically return to the characters’ hometowns and they return to their old vocations or begin with new ones; and the dream world ceases to exist. The whole thing ends with the egg at Cloudsgate Citadel hatching, while Ashlynn, whose real world form has been destroyed and hence can’t remain there, looks on.

I’m interested in how DQ6 functions as a prequel to DQ4 and 5. Really, in most respects, it doesn’t. The main thing these three games have in common is the presence of the heavenly realm of Zenithia, and I’ve heard at least one of developers didn’t want there to be any major connections beyond that, although a few managed to sneak in. It’s similar to how DQ3 is a prequel to the first two games in that you obtain the legendary equipment that appears under a different name in the other two. There, the Sword of Kings, Armor of Radiance, and Shield of Heroes are later named after Erdrick/Loto. The Sword of Ramias, Armour of Orgo, Shield of Valora, and Helmet of Sebath presumably become the Zenithian equipment in 4 and 5, but it’s not quite as clear, nor do we know what the old names refer to. I wonder if the Sword of Ramias has anything to do with the Phoenix Ramia. The sword has a different magical power than the Zenithian one does in the other games, too. What does directly connect the games is that Cloudsgate Citadel is the only part of the dream world that survives Mortamor’s death, and it’s ruled by a Lord Zenith and has the same basic layout as Zenithia Castle in 4 and 5.

As such, the implication is that it’s the Zenith Dragon who hatches from the egg in the castle. There’s even a line suggesting one of the residents is the future mother of the hero from 4. I believe the post-game content makes clear that 4 is the future of this world and 5 the far future, but the worlds don’t really look anything like each other.

You can see similarities between 4 and 5 if you stretch a bit, but it’s totally different in 6. So how much time passes between these games? Well, it’s stated in 4 that the Zenith Dragon was instrumental in sealing the Demon Lord Estark underground 1000 years previously, so if he’s just born at the end of 6, it must be more than that. Of course, while there have been plenty of geographical changes in our world in the past thousand years, you have to go back much further than that to see any significant alteration in the basic shapes of the continents. Then again, this IS a world with powerful magic. That means we still don’t know the complete story of Estark’s original rise to power and defeat; he’s always a legacy boss. 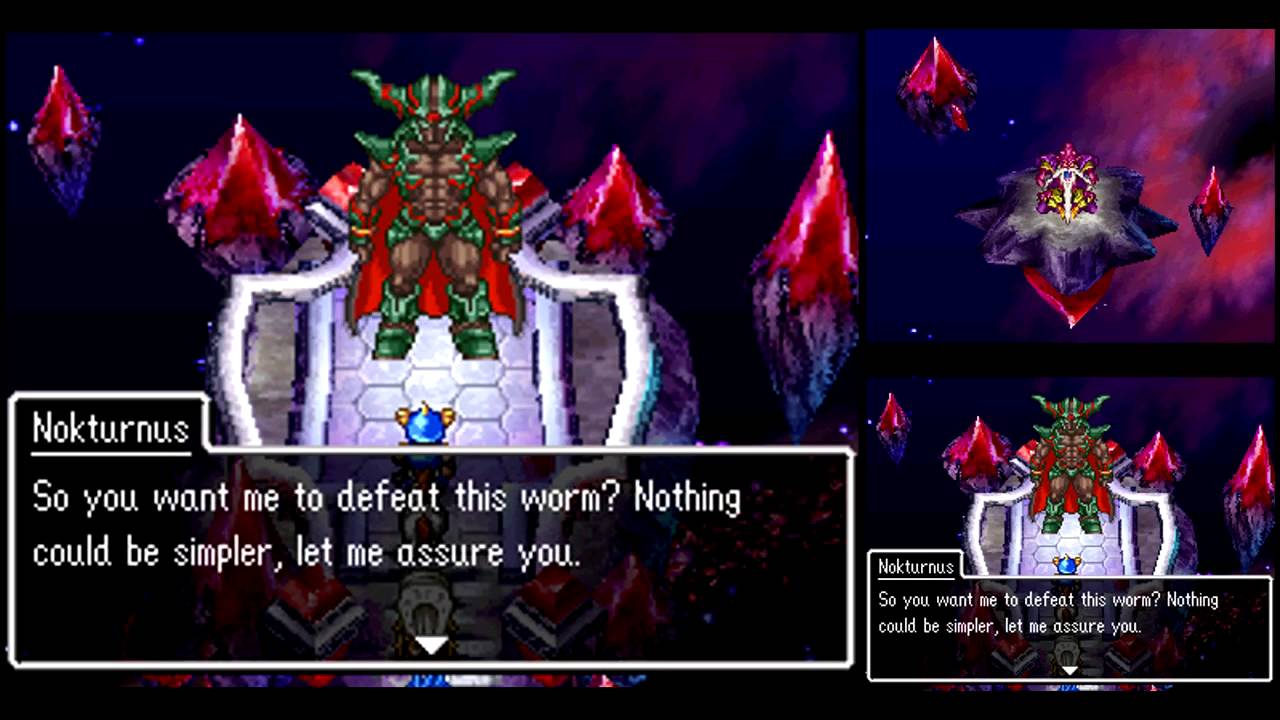 6 actually introduces another Demon Lord who never gets to be the main villain in a game, Nokturnus, whom someone at Castle Graceskull summons to defeat Mortamor, but he just kills a bunch of people and destroys the castle instead. You can fight him in the post-game content and as a legacy boss in other games. 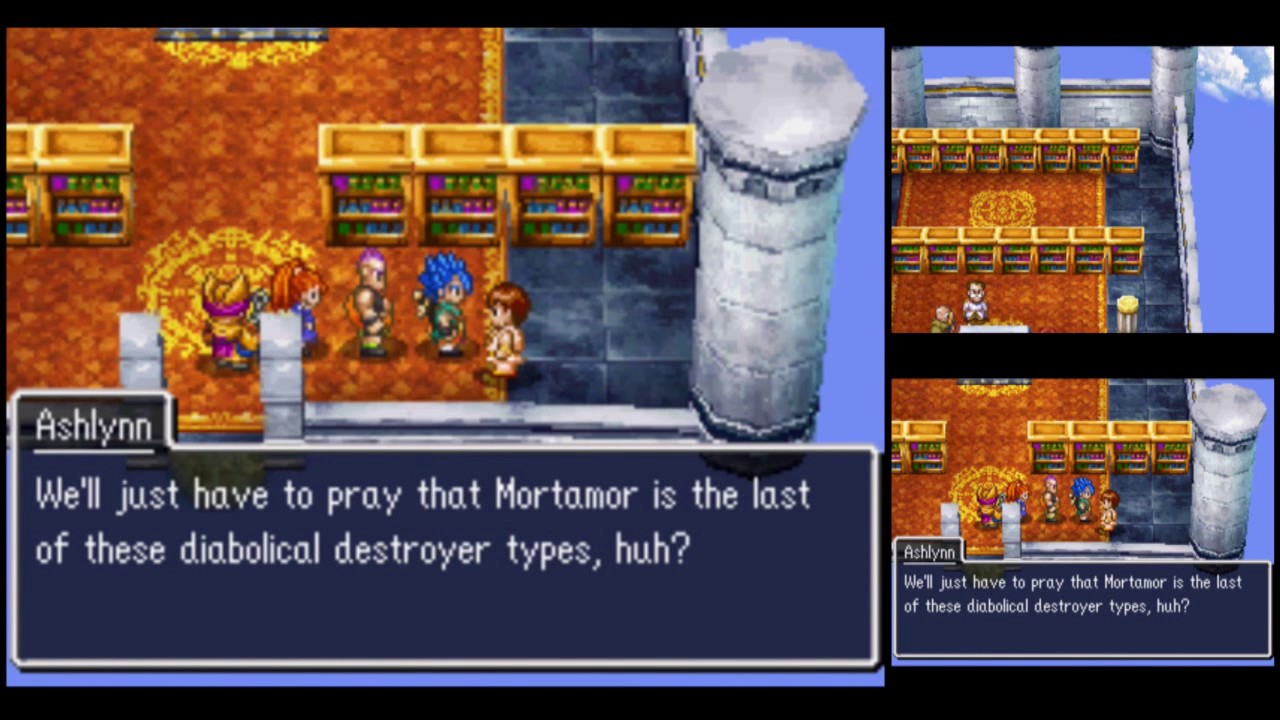 So what’s next for me in terms of games? Well, it would make sense to finish DQ5, but I don’t have it on hand right now. So instead I’ve started on Mario and Luigi: Dream Team, because I apparently can’t get away from games with dream worlds.

3 Responses to Castle on a Cloud