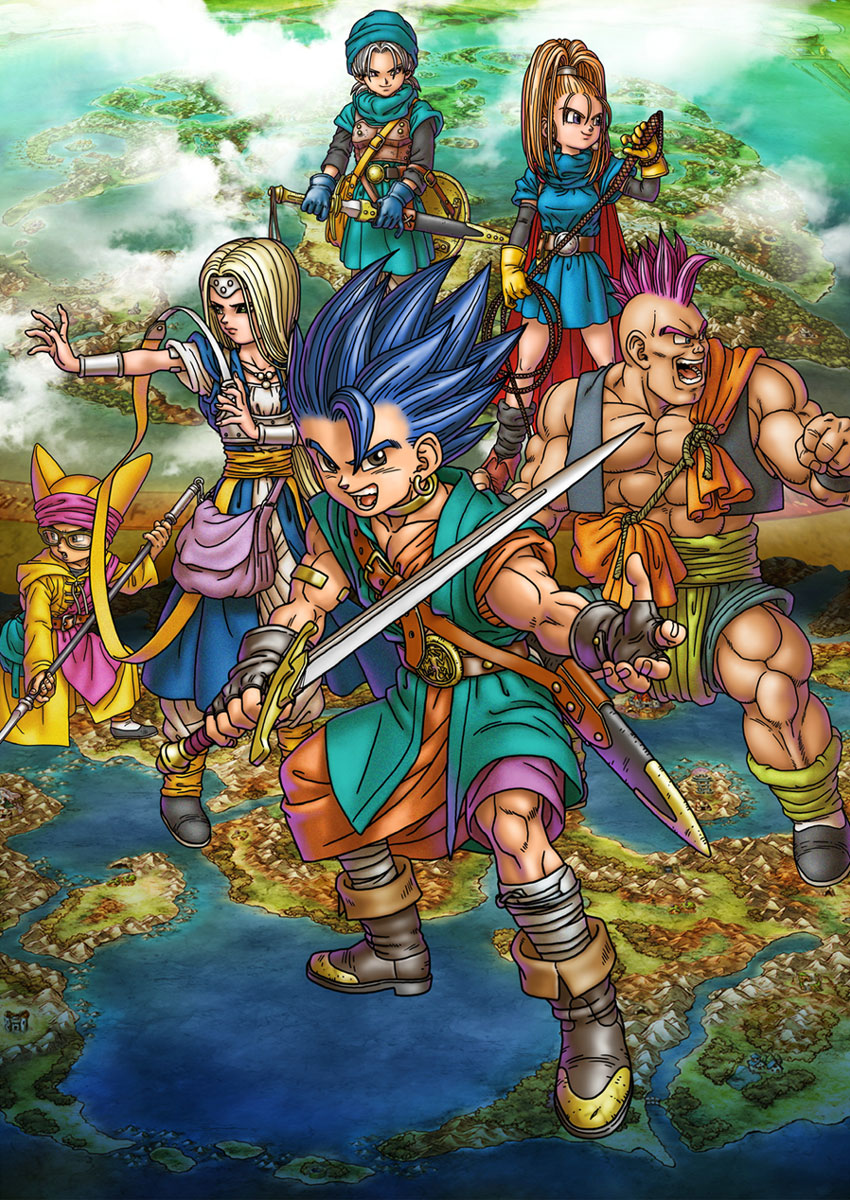 I wrote a post about Dragon Quest VI a few weeks ago after finishing the game, and I have a few other ideas for video game entries, but before I go there I’d like to take a closer look at the characters from DQVI. As with DQ4 and 5, you can only control four party members in battle, but you can bring four others along with you in a wagon, and they also get experience. There are six party members who always join in the course of the game, as well as several optional ones. There are SPOILERS in what follows, if you’re concerned about that kind of thing.

We start with the hero, who as usual is named by the player and present throughout the game. DQ heroes generally don’t have any dialogue, which I suppose is so you can imagine what he’s saying, but I think it often makes the hero the least developed member of your party. He can equip the legendary equipment and is good with both weapons and magic. Due to the job system, any of the characters can develop pretty much any skills, but some are still better in some areas than others. The hero this time is the Prince of Somnia, although he doesn’t know it until a while into the game. There’s a part earlier on where he has to pretend to be the Prince, so I assumed that was leading up to that being who he really was, due to storytelling conventions. Well, he’s actually the dream version of the Prince. The two selves were separated by the Dreadfiend Murdaw when he initially took on the monster with the help of two companions, Carver and Milly.

Carver was known as Hassan in the original Japanese, but I don’t know whether that means he was supposed to be Middle Eastern. He apparently speaks with an Irish accent in Dragon Quest Heroes II and in a Cockney dialect in DQ9. His name was presumably changed for the sake of wordplay, as he’s a carpenter, although he dreams of being a martial artist. He’s a big guy and a good friend to the hero.

Milly is from the Kingdom of Felonia, where her parents sold her into slavery, and she became a dancer for the King. Later, she became an apprentice to the Dream Sage, Madame Luca Luminista. Carver finds his real-world body as a statue in Murdaw’s castle, and the hero’s has been hanging out in the small Somnian village of Weaver’s Peak. It’s never explained what happened to Milly’s body, but she’s apparently already found it before you encounter her again. It seems like such a thing should have been explained, but it isn’t. 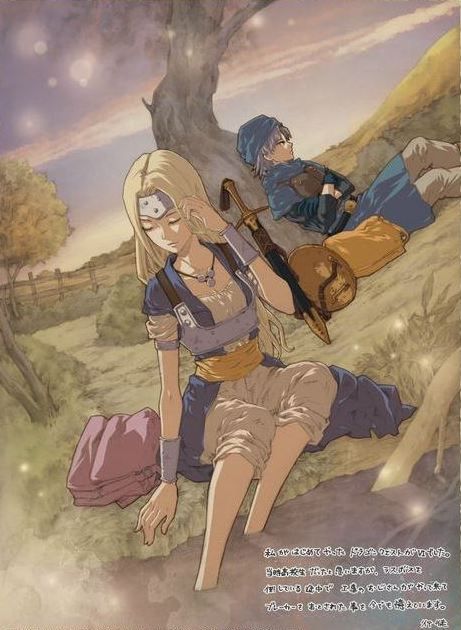 Another character is Milly’s younger brother Terry, whose inability to protect his sister made him wander the world seeking weapons and power.

You come across him a few times before you’re able to recruit him, but even if Milly is in your party, he doesn’t show any sign of recognizing her. Finally, he sells his soul to the Dreadfiend Dhuran in exchange for power, but after you defeat him and Dhuran, he joins your party. 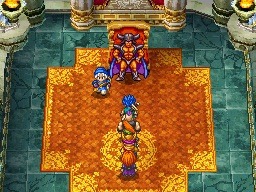 He has a smug attitude that presumably resulted from his childhood trauma. Terry seems to have been the popular favorite from this game, as he’s also the protagonist of Dragon Quest Monsters. He and Milly (called Milayou in the original English translation), both children (this is apparently before they were sold into slavery), are taken to the Kingdoms of GreatTree and GreatLog to train monsters and compete in the Starry Night Tournament.

A lot of bosses from the main DQ series show up, and at one point you have to fight Dhuran, who has an older Terry working for him. He at first scoffs at his younger self, but later apologizes, presumably never realizing who the child is. He’s also the only DQ6 character to be playable in Dragon Quest Heroes; DQH2 has both him and Carver. I’ve seen it pointed out that, if you combine the siblings names, you get “military,” but I don’t know that there’s any real significance to this.

The other two required characters are Nevan and Ashlynn.

The former is a nerdy, egotistical, and rather sheltered priest from the village of Ghent, and perhaps the first DQ character to wear glasses, although the two male protagonists in DQ2 are shown in artwork wearing goggles for no apparent reason. Well, there’s also Avan in the spin-off manga The Adventure of Dai, who was introduced before Nevan, but never appeared in a game.

Ashlynn was called Barbara in Japanese, the change possibly having been made for the same reason Tina in FF6 became Terra; it’s just too common in the West. The name Ashlynn is derived from Irish Gaelic for “dream,” and an Irish name makes sense for a redhead. In addition, her real body was burned to ashes, although an application of Dream Dew allows her to interact with the real world. She has amnesia when you first encounter her, but is eventually revealed to be from Sorceria, a town destroyed in the real world and sealed away in the dream one. She has feelings for the hero, but since I didn’t use her much, it wasn’t really something I picked up on. 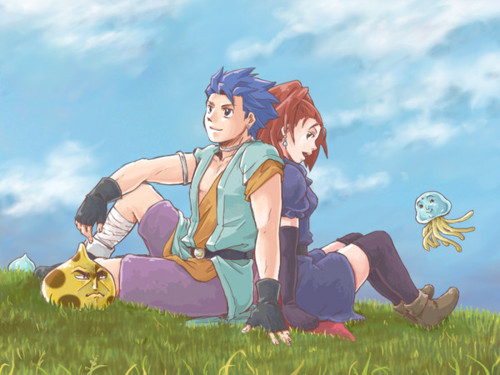 She fades away with the dream world at the end, but then turns up in Cloudsgate Citadel.

The only optional human character is Amos, a local hero from the town of Scrimsley who turns into a monster during the full moon. There are monster characters as well, as in DQ5, although there are considerably fewer in the 3DS version than in the Super FamiCom one. Most are Slimes of some variety or other, but there’s also a Hackasaurus named Lizzie who’s defeated by Terry early in the game, and will join the party at his request.

Peggy Sue, the horse who pulls the wagon, also gets a bit of development.

The hero and Carver capture her when she’s running wild in Somnia, and she’s later revealed to be the legendary Pegasus, although she only regains her powers of flight when you obtain the Celestial Reins. I thought the wordplay with her name was pretty clever, and it apparently didn’t exist in the original Japanese.