Monstrous Fun for the Whole Family

I’ve been writing about Dragon Quest a fair amount recently. I went back and finished Dragon Quest VI about a month ago, and last week I did the same with Dragon Quest V. I actually had even less of that one left to play. I’m not really sure why I put it aside all those years ago. I probably either started focusing on a different game or just wasn’t playing any games for a while. I seem to recall this one’s plot better than that of DQ6.

This game was quite innovative in a few ways. Perhaps the main one is that of having it take place over three generations, including a choice of which character to marry. This wasn’t the first time something like this happened in an RPG. I remember the same idea being heavily promoted for Phantasy Star III, and I think there your choices might have affected the plot even more. (That reminds me that I should maybe try that game again; I have the Game Boy Advance version.) But it works quite well here, working in the family idea while retaining the traditional elements of a DQ game. 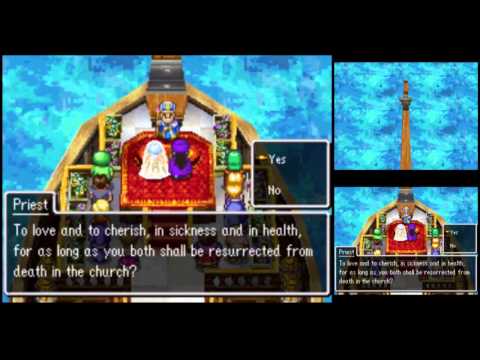 There’s a lot going on, even though I don’t know that it’s really any longer than other games from the same time period. The use of time skips helps to create a more epic feel without actually making you play the in-game equivalent of the eighteen years over which the story occurs. The story starts out with the main protagonist living in the small town of Whealbrook with his father Pankraz and his assistant Sancho. In the original Japanese, the father’s name was Papas, which I guess was too obvious in English, but I’m not sure why the new name sounds like an internal organ. 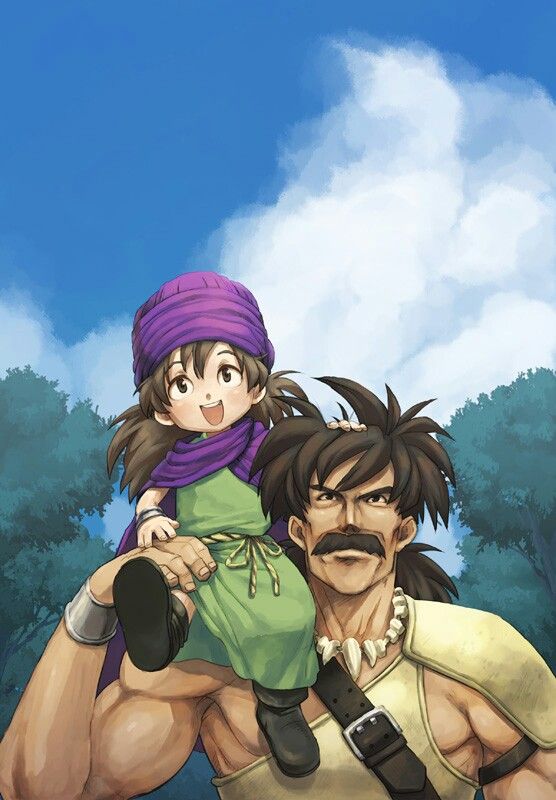 You assist fairies in an alternate world, and hunt ghosts and rescue a sabercat cub with Bianca Whitaker, the daughter of the innkeeper in Roundbeck.

During a journey, Pankraz is killed by a nasty piece of work called Bishop Ladja, and you and the bratty Prince Harry of Coburg are enslaved, made to build a giant temple to evil called the Crocodilopolis. 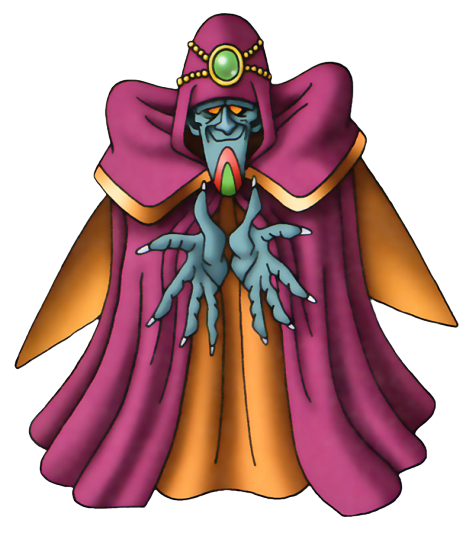 There’s a ten-year time skip, after which you escape and try to honor your father’s wish to find your mother and locate the Zenithian gear and the legendary hero who can equip it. Along the way, you come across a rich guy named Rodrigo Briscoletti, who wants to marry his daughter Nera to someone who can obtain the Circles of Fire of Water. Once you do so, you have the choice of marrying Nera, her spoiled sister Debora, or Bianca, who helps him to retrieve the Circle of Water. I chose Bianca, who I guess was basically the obvious choice as she was a childhood friend. The DS version does try to mitigate this somewhat by having Rodrigo and his daughters show up earlier in the game, but you still never really get to know them. Debora, by the way, was added for the remake as well; you only had two choices of bride in the Super Famicom original. There’s some obvious replay potential in choosing a different wife, which I understand doesn’t affect the main plot much, but does result in very different dialogue. Hopefully I’ll go back and do that someday. 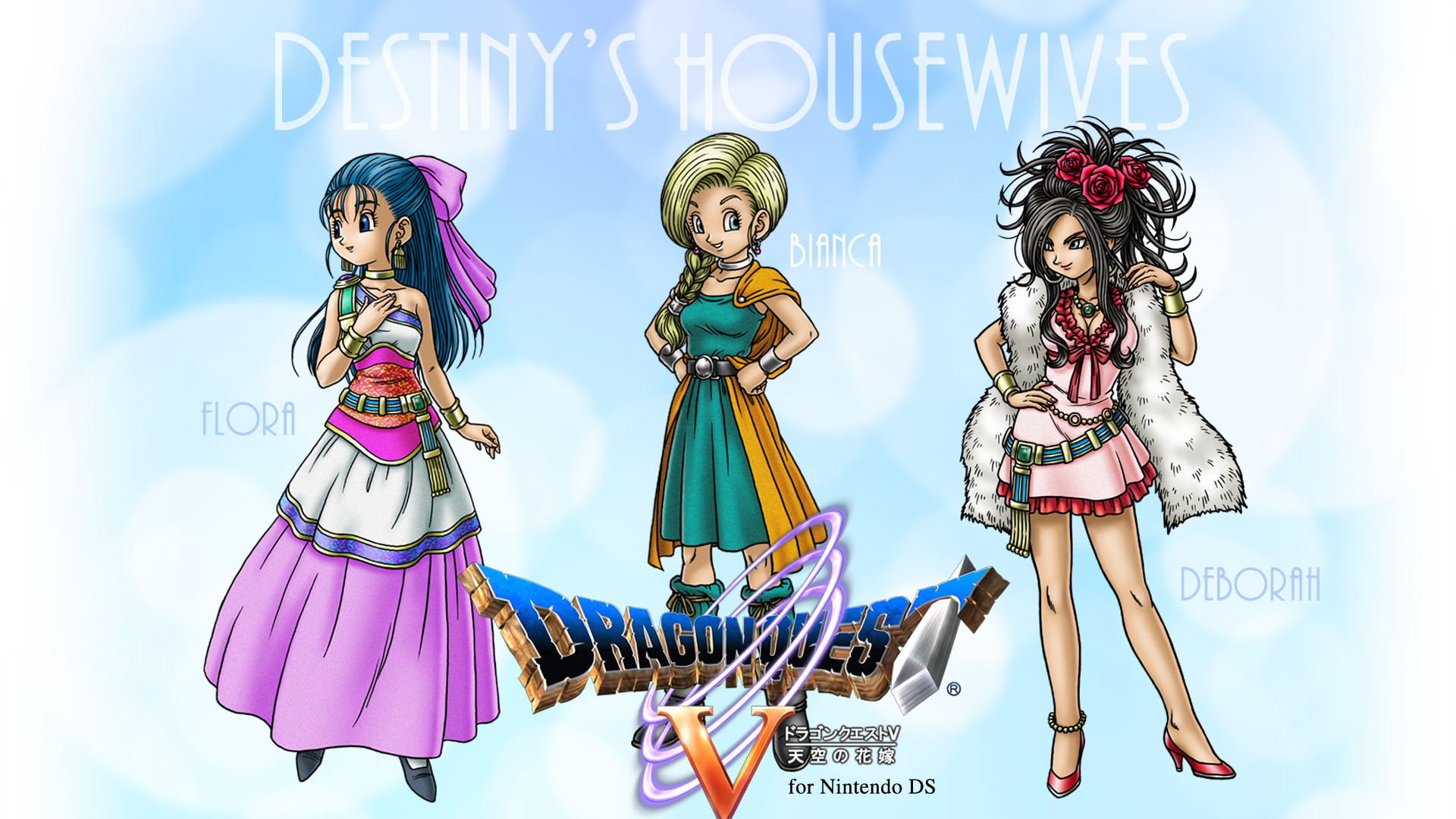 But anyway, after reaching the Kingdom of Gotha, you learn that you’re the heir to the throne, and also that your wife is pregnant; she gives birth to twins, a boy and a girl, while you’re off performing the rite of passage to earn the crown. There’s no time skip for the pregnancy, so I guess you just have to assume more time passes than appears to. Ladja turns both the hero and his wife to stone, but eight years later your kids and Sancho find your statue and disenchant you. It turns out that your son is the legendary hero who can equip the Zenithian equipment, which is a little confusing as the term “hero” is generally used for the main character, and here they’re two different people. The hero’s father apparently has no issue with dragging two eight-year-old children on a quest to defeat the forces of evil, but hey, neither did HIS father. You then have to rescue your wife from the Crocodilopolis and fight the main villain, Grandmaster Nimzo, finally meeting your mother along the way.

In addition to the family aspect, another innovation is being able to tame monsters. Probably inspired at least partially by how the Healslime Healie and the dragon Sparkie are uncontrollable party members in DQ4, some monsters will volunteer to join the party after you defeat them in battle. This mechanic would later take center stage in the Dragon Quest Monsters spin-off series, but there’s generally some variation on it in later main series games. It’s even somewhat relevant to the story here, as you find out that the people of Lofty Peak, your mother’s old hometown, have the ability to tame monsters. You can have four active party members plus four in the wagon at any time, and this includes monsters. One I found myself using quite a bit was the golem Mason. I switched him out for Bianca after rescuing her, even though she was rather underleveled due to her time as a statue, mostly because it felt right. In the final battle, however, my human characters were wiped out, and it was Mason (they all come with names, which you can change but I never bothered) who struck the killing blow against Nimzo. What’s kind of weird is that the recruited monsters apparently just wait around during the eight years the protagonist is a statue; I can’t recall if that’s addressed in the game. There are a few other optional party members in addition to the monsters. Once you’re established as King of Gotha, Sancho and some of the soldiers can be added to your group.

In terms of transportation, DQ3 and 4 both had a sailing ship and a method of flight, a bird in the former and a balloon in the latter. In 5, there are three ways of flying. The first is a carpet that can’t fly over high mountains, a mechanic that’s used again in the next two games. Then there’s Zenithia Castle, once you get it out of the lake into which it’s fallen.

Finally, to access the Crocodilopolis on Mount Azimuth, you need to get a ride from the Zenith Dragon himself.

I think I’ll end this post now, although I might want to write another one about lore and references in the game, of which there are plenty. I also sort of want to look at DQ heroes in general. Any thoughts on these ideas, or anything else you want me to address? Let me know! 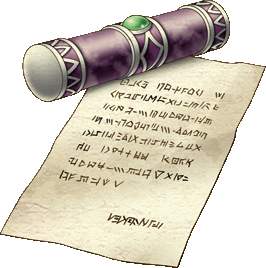 2 Responses to Monstrous Fun for the Whole Family