A Foray Into Animated Enchantresses

A few days ago, Tavie brought up how both Disney and Warner Bros. cartoons have witches named Witch Hazel, both voiced by June Foray, and said I should write a post about that. From the brief research I did, it turns out the name has also been used by other cartoon studios, Wikipedia mentioning MGM, Famous Studios, and Rembrandt Films’ Hazel Witch, as well as the recurring character in Little Lulu comics.

There’s a mention here of a young character called Witch Hazel showing up in a Casper cartoon as well. It’s an obvious play on words, and apparently no one was able to copyright it because it’s the name of an actual product. The name of the shrub and the astringent made from it apparently have nothing to do with witches, even though herbs and potions are their stock-in-trade. Rather, it means “pliable,” in reference to the leaves. Disney’s Witch Hazel appeared in the 1952 Donald Duck cartoon Trick or Treat, which was also adapted into a comic by Carl Barks. She helps Huey, Dewey, and Louie when Donald refuses to give them any treats.

Unless I’m mishearing the line, I believe she tells Donald her first name is Edith, but that doesn’t seem to be used anywhere else. Chuck Jones was inspired by the Disney cartoon in creating his own Witch Hazel, and Foray says she pitched the character to him. For some reason, the first Looney Tunes short to feature Hazel, Bewitched Bunny, doesn’t have Foray doing the voice; it’s Bea Benaderet, a regular voice actress for Warner Bros. who was later the voice of Wilma Flintstone. Foray does voice the character in her other main appearances, starting with Broom-Stick Bunny. There are clearly some influences from the Disney character in addition to the voice, like how both Witch Hazels (Witches Hazel?) have brooms that act like animals and separate their bristles into legs to walk around on the ground. And they both parody Shakespeare’s Macbeth when cooking up magic brews, although I’m sure that was standard well before cartoons. But while Disney’s Hazel is mostly good, if perhaps a little overly vindictive, WB’s is mean, always wanting to cook Bugs Bunny or use him in a spell. She’s drawn as fat and green-skinned, with an enormous chin that touches her long nose when she’s not talking, and hairpins that fly out of her hair when she’s excited. She also has a habit of laughing at her own jokes. 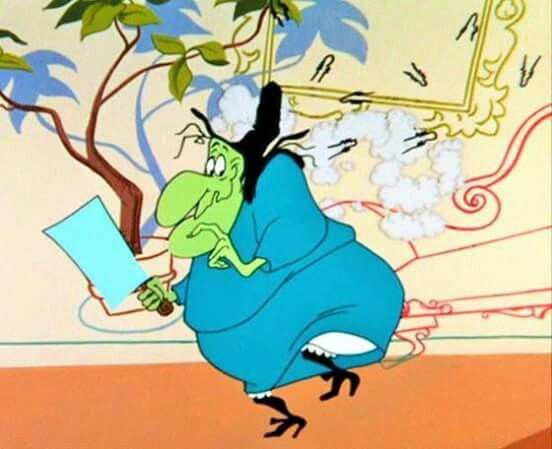 Foray has voiced witches in other cartoons as well, albeit not with the name Hazel. She was a witch in a Tom & Jerry short before Broom-Stick Bunny was released. And in the original DuckTales, she was the voice of Magica de Spell, a nemesis of Scrooge McDuck introduced by Barks in 1961.

Fantagraphics hasn’t yet reached her stories in their Barks collections, so I haven’t read any of the original Barks ones.

She lives on Mount Vesuvius, and her main thing is that she wants to create a magic amulet from the first coin earned by the richest person (well, duck) in the world. Not wanting her to be the typical old hag, Barks modeled her on Gina Lollobrigida and Sophia Loren, as well as Morticia Addams. Oddly, in DuckTales, Foray gives her an Eastern European accent similar to the one she used for Natasha Fatale in Rocky and Bullwinkle instead of an Italian one. Apparently some comics have paired Madam Mim from The Sword in the Stone with both Magica and Witch Hazel (the Disney one), but I don’t think there’s any Foray connection with her. Mim was voiced by Martha Wentworth, and while she’s made cameo appearances more recently, I don’t think she’s had another speaking role. 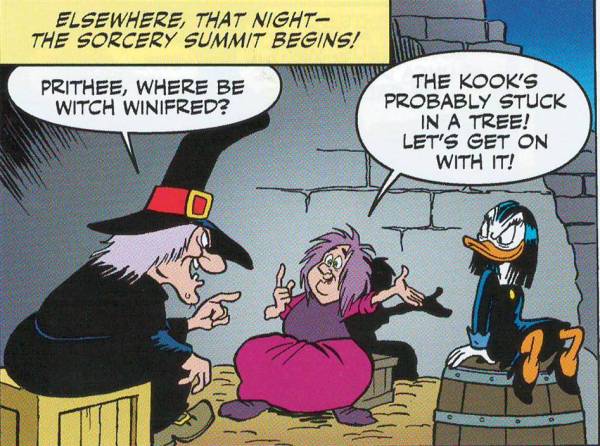 1 Response to A Foray Into Animated Enchantresses