I’m on Top of the World I saw a link on Twitter to this article on Ancient Origins, a site that presumably isn’t always reliable. What it says here seems to have all been verified elsewhere, however, with nothing about aliens building the pyramids or anything. Indeed, if aliens HAD visited Earth back in the days described, they could have just told people, “Hey, the world isn’t flat, and there are other worlds as well.” The general conception for the world in most ancient civilizations seems to be that of a flat disc, or occasionally a square or rectangle, made up of land surrounded by water, or sometimes floating on the water. The heavens are located above it, shaped like a dome because that’s what we see when we look at the sky; and the underworld is below. I’m not entirely sure why the idea of the gods living up in the air and the spirits of the dead underground is so universal, but it could just be because of appearances. Obviously the gods would choose the more impressive-looking place to live, right? Mentioned in the article is one of the earliest known world maps, dated to around the sixth century BC in Babylonia. It’s known as the Imago Mundi, although that’s obviously not what the Babylonians would have called it.

It shows a circle of land with the River Euphrates running through the center, the ocean surrounding the land, then eight triangular regions past that, shown like the rays of the Sun in cartoonish depictions. Several significant locations to Babylonian culture of the time are labeled on the map, but there are other places people of that time and place would have known about that aren’t represented. The surviving descriptions of the triangular regions include one where the Sun can’t be seen, one that even birds couldn’t reach, and another inhabited by a fierce bull. Strange monsters lying in the unexplored parts of the world is a regular feature of old maps and legends, and somewhat persists even in the present day. People hear rumors of weird animals, sometimes botched descriptions of real ones and other times totally made up, and since none of them live nearby, they figure they must be somewhere in remote areas. Indeed, another feature of such ancient maps and views of the world in general include the culture that came up with them living in or near the center, with this also being the center of civilization, lands becoming wilder as you get closer to the edges.

The ancient Greeks were much the same way, and while I’ve heard they considered a few different places in their land to the be the center of the world, the best-known one is Delphi. There’s a story that Zeus released two eagles from opposite ends of the Earth, and, both flying at the same speed, they met in Delphi. I’m not sure who was watching to make sure neither of the eagles ever took a break. I mean, I guess Zeus was, but mythology doesn’t paint him as a particularly trustworthy guy. He might well have stopped watching the eagles when he noticed a hot nymph. The idea of Delphi being in the middle of things might come from the fact that it’s equidistant from several other holy sites, at least from what I’ve read. Around the sixth and fifth centuries BC, the Greeks seem to have accepted the idea that India is as far east as you can possibly go. I’m not sure what people in India thought of that, as we really don’t have many extant maps from there in that time period. The division into Europe, Asia, and Africa as places about the same size is likely why, at least in Europe and America, we still regard Europe as a continent despite the lack of any physical reason for that identification. Hellenistic habits die hard, I suppose.

It’s quite literal ethnocentrism to identify the place where you happen to live, or at least somewhere close by, to be the center of the world and of civilization. Even after the Earth being spherical became widely accepted, certain places were still considered to be the spiritual center, and as such given central locations on maps. Jerusalem had this association for Jews, and later Christians as well.

Early Muslims regarded the Kaaba in Mecca as being the center of the world. 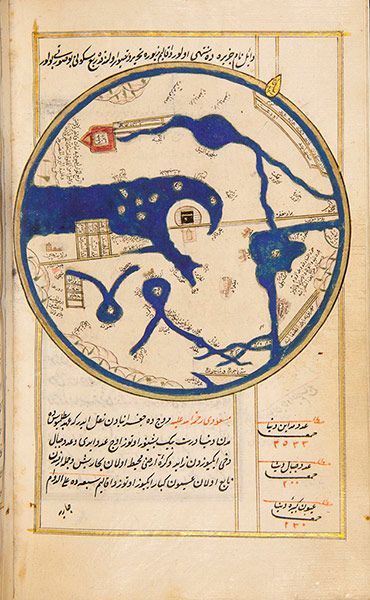 There was an attempt in the nineteenth century, still accepted by some today, that the Great Pyramid was built in the geometric center of all land on Earth, which sounds rather too convenient to me. And the international Prime Meridian makes London central to the longitudinal system not for scientific reasons, even made-up ones, but just because it was the main center of production for star charts at the time. This actually makes the Gulf of Guinea the zero point of both latitude and longitude, but you don’t hear too much about that. I have to wonder if there are any civilizations that figured they lived closer to the edges. Even ancient thinkers would have realized that odds were against their just happening to be in the middle of everything, wouldn’t they? I don’t know. While I guess we can’t really identify a certain of the universe until we find out how far it extends (assuming it isn’t endless), we know quite well that the Earth is nowhere near the center of the Galaxy, instead being located on one of its spiral arms.

Of course, being in the physical middle doesn’t necessarily have any particular relation to someone or something’s importance. We haven’t so far seen clear indications of life on any other planets, but we also can’t reasonably pretend to have seen even a minute fraction of the worlds in the universe. The idea of Earth being insignificant in the grand scheme of things is a popular subject for satire, as with The Hitchhiker’s Guide to the Galaxy starting out by calling Earth “an utterly insignificant little blue-green planet whose ape-descended life forms are so amazingly primitive that they still think digital watches are a pretty neat idea.” But then, while the inhabitants of other planets are more technologically advanced and knowledgeable about the Galaxy as a whole, they’re ultimately just as insignificant, and often just as stupid and self-centered as humans, because of the whole satire thing. Both the idiotic Golgafrinchans who were tricked into crash-landing on Earth and apparently became the ancestors of humanity and the hyper-intelligent mice who designed the Earth supercomputer want basically the same things (to get rich and appear on television). But then, one of the great paradoxes of human thought is we frequently try to identify ourselves as both exceptional AND terrible. We’re the morons who ate the forbidden fruit and are naturally sinful, but also made in the image of God. I guess I tend more toward the pessimistic interpretation, without the mystical explanations; we’re selfish and easily deluded, and I don’t exclude myself from that. But we’re also capable of amazing things at times.