It’s time for this October’s round-up of horror movies. There are some spoilers within, although most of them are for movies from the eighties. 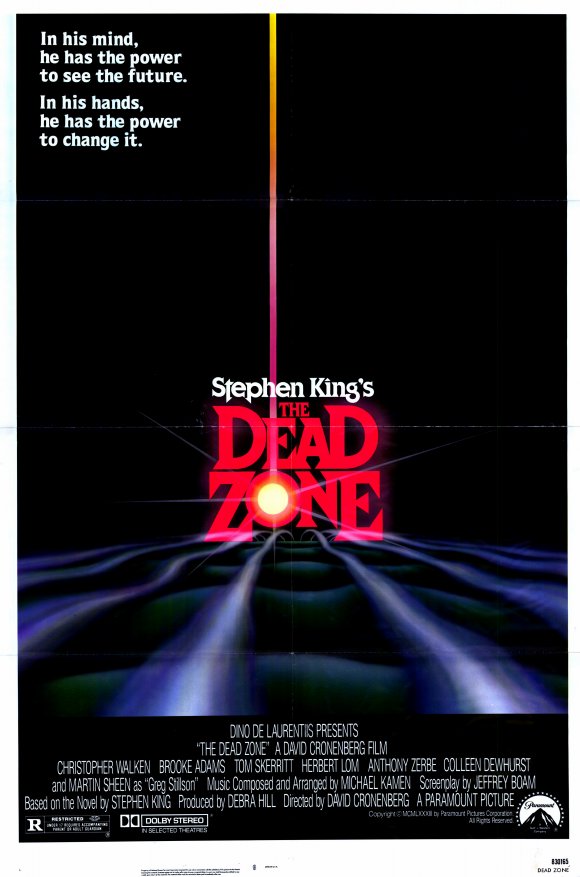 The Dead Zone – Christopher Walken gets brain damage and gains psychic powers when he touches people, and apparently also things that belong to people; I have to wonder if it’s more clearly delineated in the novel. At first he’s annoyed at those who come to him for help and upset that his girlfriend found a new man while he was in a coma, but when he finds out that a popular Senate candidate could potentially start a nuclear war, he decides it’s his mission to assassinate the guy. The candidate’s career is ruined when he uses a baby as a human shield, although you know that, if Donald Trump tried that, his supporters would still defend him. The guy his old girlfriend married turns out to be part of the would-be Senator’s campaign staff, and she apparently has an affair with Walken’s character while staying married, which doesn’t say a whole lot for her integrity. It’s worthy of note that the accident that starts the whole thing is caused by a truck losing its trailer. I pointed out how much trouble trucks cause in Stephen King stories, and coincidentally, Kevin Maher released a video about that exact thing the following week. Don’t Breathe – Three young thieves break into the home of a blind war veteran to burgle it, only to find out that he’s totally psychotic. At first you can sympathize with him, but later it turns out that he’s a psychopath who kidnapped and artificially inseminated the woman he held responsible for his daughter’s death. So there’s really nobody you can root for here. 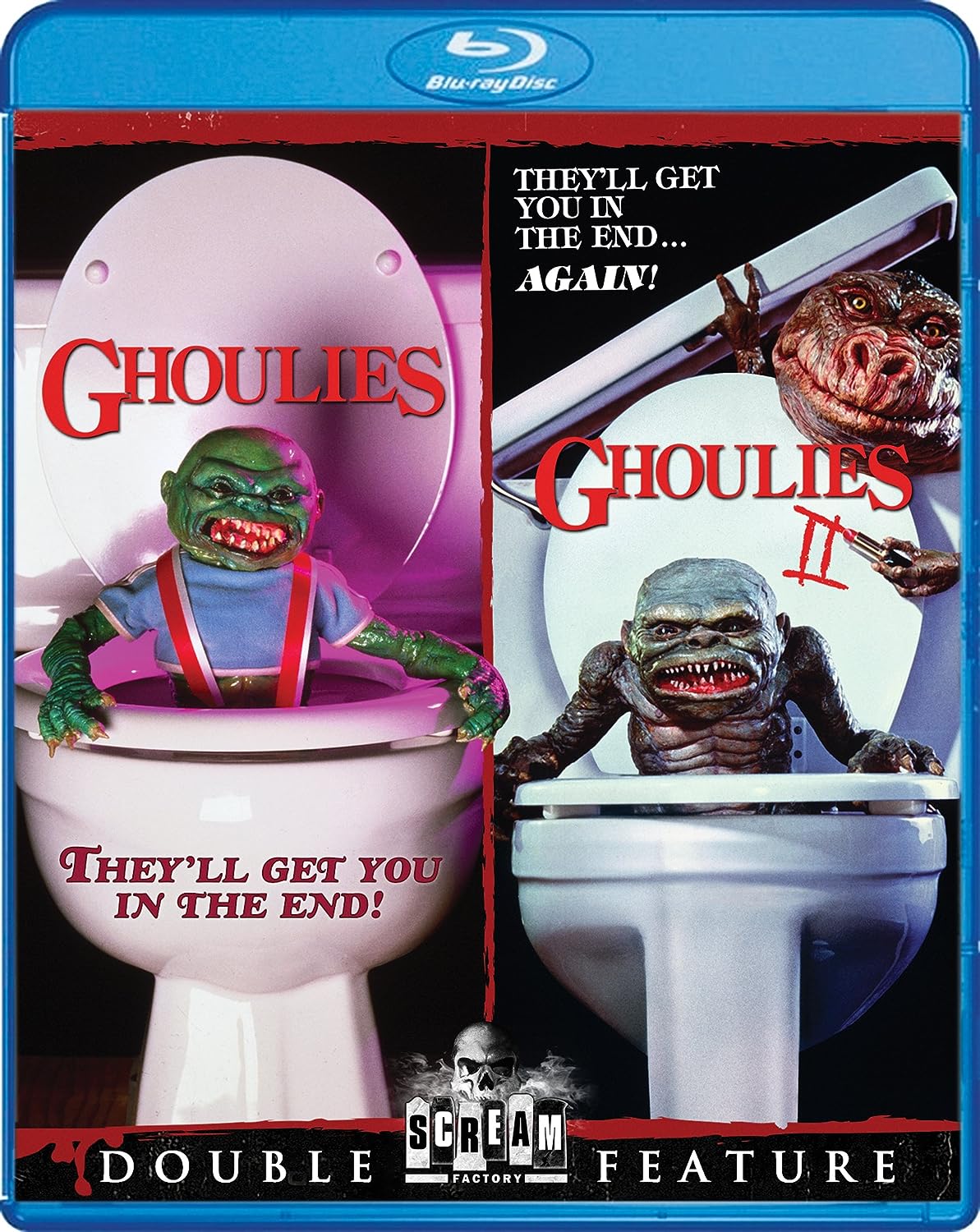 Ghoulies – Gremlins led to a trend of movies about tiny monsters going on a rampage. This might not be a rip-off per se, as the two movies were apparently in production at the same time, but it does appear to have been trying to ride the other film’s success. The music at the beginning is even similar. The plot involves a young man inheriting an estate from his late father, who just happens to have been an evil wizard. He invites his obnoxious college friends over for a party, and performs a ritual he found in one of the books of magic in the house, which results in the Ghoulies showing up. There are two different types of Ghoulies, the furry kind and the more amphibian-like sort, but I don’t know that there’s any real indication of the difference between them other than looks.

Accompanying them are two dwarves, and unlike the Ghoulies, they talk. A Ghoulie does come out of the toilet, as shown on the video cover, but nobody is on it at the time. And after the wizard is defeated, the obnoxious friends who were mutilated by Ghoulies come back for some reason. What’s notable is how the Ghoulies don’t show up until a significant way through the movie, and even then they take a back seat to the wizard. I believe this was the first film role for Mariska Hargitay, whom I’d heard of although I don’t think I’ve seen her in anything else. I looked her up, and found out she was Jayne Mansfield’s daughter. You probably already knew that, but I didn’t.

Ghoulies II – We didn’t seek out the sequel, but the DVD from Netflix was a double feature. While not great, it’s considerably better than the first. I think the creators realized what people wanted to see from a film about tiny, creepy monsters, which is to say, more of the tiny, creepy monsters themselves. They showed up much earlier in the movie, and without the two dwarves. And this time, someone is actually attacked while on the toilet. The main plot, such as it is, involves a failing haunted house at a traveling carnival. The washed-up, drunken magician who works there accidentally summons the Ghoulies with a spell he finds in a book. At first, business at the house picks up, as people love the Ghoulies’ antics without realizing that they’re really killing people. As the Ghoulies are essentially just a force for chaos, there’s a more human villain as well in an annoying eighties yuppie who wants to buy out the haunted house. On staff at the house is a character played by Phil Fondacaro, the little person who played the professor in Troll. His character is an actor who’s annoyed at having to play essentially a gimmick when he’s classically trained and has done Shakespeare, and I have to wonder how much that’s true of Fondacaro’s actual experience. 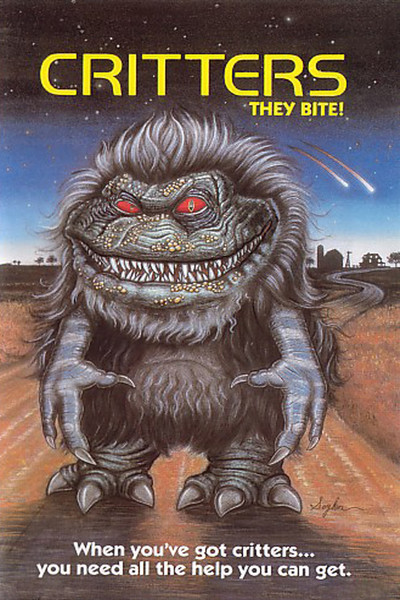 Critters – Another movie about tiny, ravenous monsters, the gimmicks this time including that they’re from outer space (apparently an early draft of Gremlins made them aliens as well, but this didn’t make it to the finished film) and can form into hedgehog-style balls and roll around. Oh, and they’re technically known as Krites. They don’t speak English, but some of their dialogue is subtitled. Not that it really needed to be, but I guess they couldn’t resist having one of them say “Fuck!” in Kritese. They invade a tiny town in Kansas, with most of the focus being on one family and their UFO-obsessed handyman friend. The son is obsessed with fireworks, the daughter apparently makes out with a lot of dudes, and the mother is Dee Wallace. The son has an E.T. toy, which I guess is an intentional reference to Wallace’s more famous role. The family also has a cat named Chewie, presumably a Star Wars reference. Then there are these two shape-shifting alien bounty hunters who are trying to capture the Krites, and cause a lot of confusion and severe property damage along the way. It’s kind of a weird combination of genres. And since toilets came up with the Ghoulies, one of the Krites rolls into a toilet and is killed while in it. There are four movies in both the Ghoulies and Critters series, and Beth has mentioned another movie from around the same time called Munchies (although she hasn’t seen it either), but I think I’ve had enough of tiny, deadly creatures for the time being.

Garfield’s Halloween Adventure – Just a television special, not a movie, but I thought it deserved a mention. I can’t recall having watched this one as a kid, although it’s possible I did and just don’t remember it. Then again, I remember a fair amount about Garfield in Paradise, which I haven’t seen in years. Garfield realizes that he can get more candy if he brings Odie trick-or-treating with him, so the two of them dress up as pirates and go around the neighborhood. I didn’t think cats were that keen on candy, but Garfield will eat pretty much anything besides raisins. He figures they can get more if they cross the river in a little rowboat, but they end up on a tiny island and hear a story about ghost pirates who are supposed to be returning for their treasure that night. And then, well, they do; but our protagonists find their boat and get away. 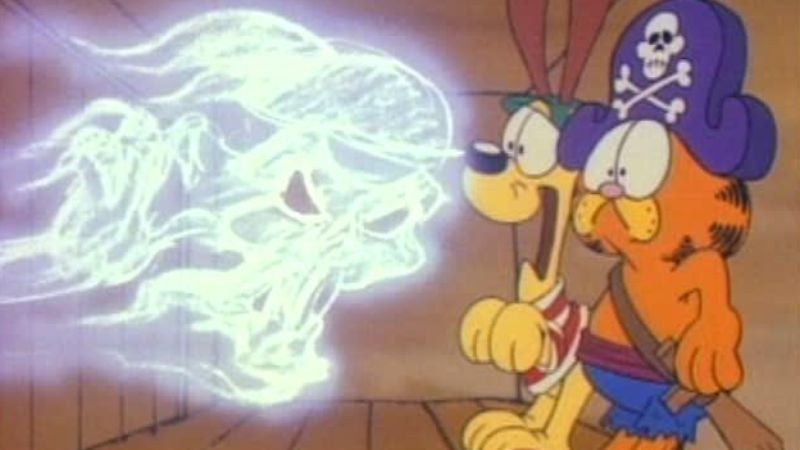 It’s really centered on pirates for a Halloween special, but Beth, Dewey, and I did dress up as pirates one year. The final joke involves an all-night pirate movie marathon, and I commented that, nowadays, they could just show the Pirates of the Caribbean films. Heck, ONE of them would take up a few hours. Interspersed throughout are a few songs by Lou Rawls, who somehow got the gig of Official Garfield Cartoon Special Music Guy.