You Bring the Winter

The Cailleach is a name for a Celtic goddess generally associated with winter, but as with a lot of deities, there’s more to her than that. She has several names, duties, and forms depending on the locality. One commonly used Scottish name is Cailleach Bheara, or just Beira. The name comes from “veil,” and basically means “old woman,” which is often how she’s depicted. She’s sometimes shown as somewhat blue-skinned, with bad teeth, matted hair, and only one eye; but it varies. Occasionally she’s a young woman instead, as her life is cyclical. This might be an extension of how she rules over half the year, from the beginning of November until the end of April. This is a common theme in mythology, and there are several accounts of how the transition is made. She might have two forms, trap the summer in a mountain cave during her reign, or turn to stone at the coming of summer. Some accounts say that she grows younger during the course of the year, and that sometimes she changes from old to young when someone shows her kindness. On Imbolc, 1 February, she goes out to gather firewood for the coming months. If the weather is bad, she’ll stay inside, which means winter is almost over. Obviously it’s similar to Groundhog’s Day, but at least there’s an explanation as to WHY a nice day would mean more winter. I don’t think groundhogs gather firewood, although they HAVE been known to chuck wood. There’s an Irish story that says she’s lived seven consecutive lifetimes and had at least fifty foster children in that time, most of whom became the founders of tribes in County Kerry. Other children of hers were giants who were given mountains in which to live. 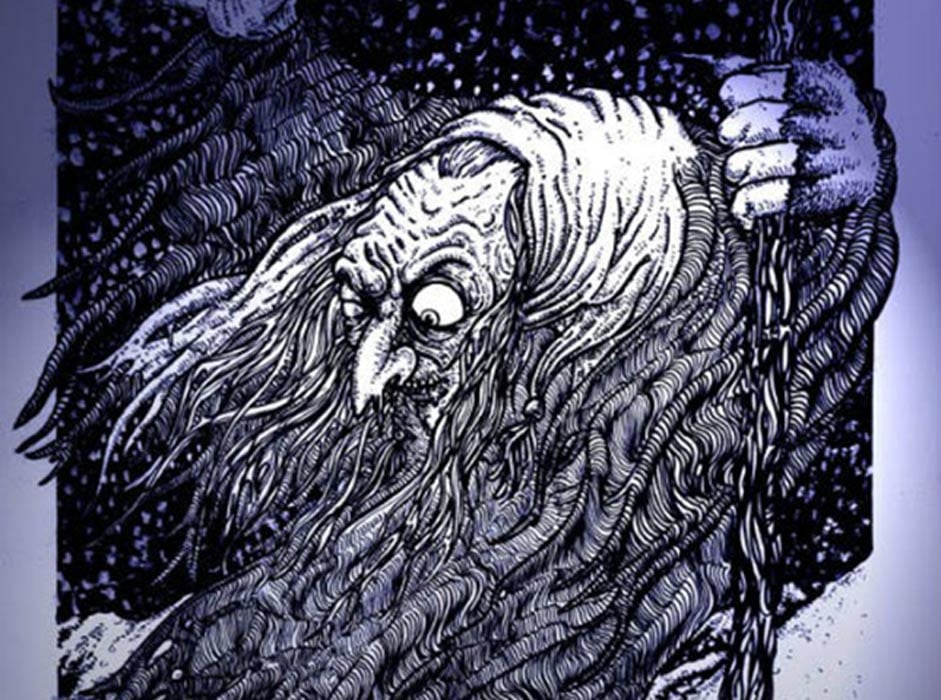 The hag carries around a staff to freeze the ground, and a hammer that she can use to shape the land, creating mountains and valleys. That suggests she’s of enormous size, but I don’t think that’s entirely consistent. She cares for wild animals, particularly deer; and is associated with the grain harvest, the last sheaf harvested representing her. There’s also some account of her riding on a wolf. Maybe someone needs to track down this Cailleach and get to the bottom of which of these legends are accurate, but that would probably be difficult. She sounds like the elusive sort.