A Heaping Helping of Hysteria

Ben-Hur – This is one of the old epic films that I thought I should watch, where the look and feel remain impressive even today, but the pacing is terrible. I’m not sure filmmakers in those days knew they could NOT show some stuff. But then, I say that, and there was a lot cut out from the book on which it was based. After a falling out with an old childhood friend, Judah Ben-Hur, part of a noble Jewish family (he’s called a prince, so does that mean he’s related to the Hasmoneans?), is falsely accused of a crime and sold into slavery. When he saves the life of his master during a battle at sea, the man adopts him and wants to make him a Roman citizen, but he eventually declines because he blames the Romans for his family’s fate. He wins a chariot race that’s imitated everywhere, especially the part where Messala’s chariot has spikes on the wheels. It’s the most famous part of the movie, but fairly minor in terms of how little time is actually spent on it. He finds out that his mother and sister, whom he thought dead, had really contracted leprosy and been exiled, but they’re healed by the blood of Jesus. It’s weird that the film is subtitled “A Story of the Christ” when Jesus doesn’t really do a whole lot; his role is pivotal, but he’s more of a supernatural helper than the focus. I understand he and Judah’s conversion to Christianity are much more significant in the book. Maybe it has something to do with the film’s director being Jewish. 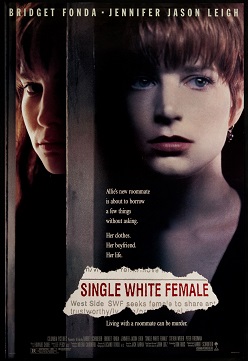 Single White Female – Beth called this part of the set of three crazy, vengeful woman movies, along with Fatal Attraction and The Hand That Rocks the Cradle, although it’s not directly related to either of those. After breaking up with her boyfriend, the main character, Allison, seeks a roommate, and the woman who ends up living with her at first seems friendly and helpful, but turns out to be codependent and psychotic. They really don’t seem to be consistent with the roommate character, whether or not she’s supposed to be sympathetic, and if she’s some kind of evil mastermind or someone who basically does nasty things at random. We’re supposed to believe she has this grand plan to frame the main character, yet she keeps evidence of her crimes in a barely hidden shoebox? It’s also gradually revealed that she blames herself for the death of her twin sister, so this…makes her want to commit murder? I mean, the sudden shifts in mood and rationality seem to be relatively common with actual mentally ill people I’ve come across, but we expect fiction to be more consistent than real life. Besides, why bring the dead sister into it at all if it doesn’t explain her behavior? I’m not sure mental illness being traceable to one specific incident is as common as the movies make it sound. The main thing about this movie that I knew before seeing it was that the psychotic woman gives a blowjob to her roommate’s boyfriend, and he doesn’t realize it at first because the two of them have the same haircut. So that’s all it takes, huh? Not that he tries to stop her when he finds out who it really is, and he’d cheated on his girlfriend earlier, so he’s really just a total scumbag. There’s some acknowledgement that she gets back together with him so quickly because she, like the psychotic girl, is terrified of being alone; but it’s largely glossed over. And there’s a scene where Allison’s client, played by Stephen Tobolowsky, tries to rape her, and I’m not even sure why it’s there other than so every straight male character in the movie turns out to be a dirtbag. Incidentally, Tobolowsky’s character here is named Mitchell Myerson, while he’s Ned Ryerson in Groundhog Day and Sandy Ryerson on Glee. What’s up with that? I guess if they made a movie with the same title today, it would be about a Trump voter.

Sucker Punch – I put this on the Netflix queue years ago, and I can’t say I remember why. Maybe it’s just because I liked Emily Browning’s hairstyle. Like Single White Female, it deals with mental illness, is pretty cheesy (although more intentionally so here), and has a gratuitous attempted rape. I think there’s some kind of sub-genre of movies set in poorly run, often crooked mental asylums. Actually, one thing it particularly reminds me of is Emilie Autumn’s book that came out a few years earlier, what with the fantasy scenario involving the inmates, the burlesque theme, and even the general appearance of the protagonists. Overall, I’d say there were some interesting ideas and visuals, but it didn’t really work as a whole. The basic plot is that the protagonist, nicknamed Baby Doll, is put into an insane asylum by her abusive stepfather so he can steal her inheritance, and he bribes an orderly to have her lobotomized. There are two levels of fantasy, one in which the inmates and workers at the asylum are in a brothel instead, and then an even deeper one where the girls are action heroes. There’s an interesting mix of genres in the deeper fantasies, including clockwork soldiers in World War I and escaping from a dragon in a helicopter. I think it might be fair to say it’s an exploitation movie. There are also several mediocre covers of good songs.