It’s strange how sometimes I’ll see topics trending on the Internet as if they’re something new when they’re obviously not. That’s not to say that I mind discussing the same topics repeatedly (I do it all the time, as you can probably tell), just that it’s weird how short our collective memories are. Recently, “Baby, It’s Cold Outside” being creepy by modern standards and “Rudolph the Red-Nosed Reindeer” being about someone who was only accepted when he could do something for somebody else have come up a lot, and neither one of these is a new observation, although I have to wonder how early anyone thought of them. The common argument about BICS is that it wasn’t intended to be disturbing, and I largely get that it’s mostly about the woman trying to convince herself to stay, but surely no meant no even in 1950? One line I do think definitely comes across differently nowadays is “Say, what’s in this drink?”, because date rape drugs weren’t as commonly discussed back then. At the concert we saw last week, one good joke was Ruben Studdard singing a polite version of the song.

As for “Rudolph,” I think it’s made even worse by the Rankin/Bass animated special. There, not only are the other reindeer nasty to Rudolph, but so is Santa Claus, who only shows up briefly in the song. In fact, the Santa of that special is kind of an old grouch in general.

When I mentioned this on Facebook, Paul Dana made an interesting comment: “I think Santa, in this show, represents a good man who carelessly hurts other people due to unexamined prejudices and blind spots. In a sense, he’s us — a person who means well but sometimes makes serious mistakes, as we all do.” There’s more to it, but I’m not going to cut and paste the whole thing. Beth and I watched the special again last night, and there’s really a lot to unpack there even after all this time. While so many characters are mean to Rudolph for no real reason, he does have friends and allies, and none of the female reindeer make fun of him. Perhaps there’s also a lesson about toxic masculinity in there, particularly with the gym class setup of the reindeer games. 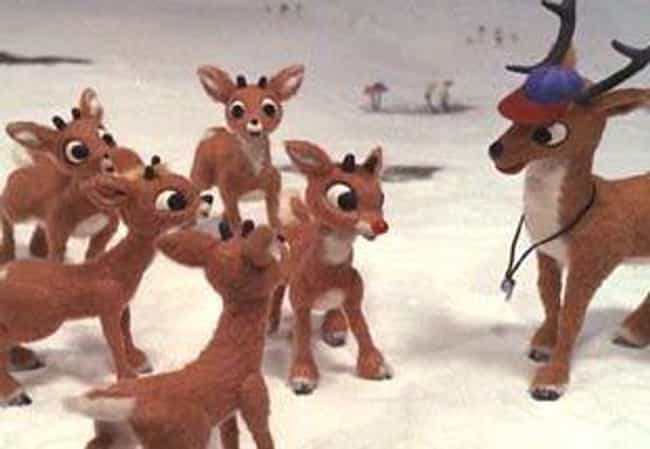 Are any of Santa’s reindeer canonically female? I guess I kind of assume Vixen is, since a vixen is a female fox, but I don’t think it’s ever really been specified. It’s also weird how all the young reindeer want to join Santa’s sleigh team when it seems like the main eight have permanent positions there, and they’d presumably been around for over a century by that point. Could they potentially die or retire, or do they share Santa’s functional immortality? I guess if Hermey and Yukon Cornelius hadn’t saved Donner from the Abominable Snow Monster, there would have been an open spot. Rudolph got in, but that was for a special purpose, and he didn’t replace anyone. I do find it interesting that Santa tells Rudolph “full power,” when the rest of the show suggests he has no control over his nose’s brightness. Maybe his learning to control it to some extent should have been part of the story, but it wasn’t.

Speaking of songs that didn’t necessarily age well, some people are apparently confused by who Parson Brown in “Winter Wonderland” is. I think there is a question over whether the Parson is someone the protagonists know or a wholly made-up character, but it doesn’t matter a whole lot. What I wonder about is how he’s sometimes changed to a circus clown, and some versions of the song have both. And if you thought rhyming “snowman” with “no, man” was kind of lazy, this verse rhymes “snowman” with…”snowman.” This site dates the clown verse to 1953 (the song itself dates back to 1934) and speculates that it was changed to make it more child-friendly. Does anyone know of recordings from before that with the circus clown included (whether replacing the Parson or in addition to him)? The verse refers to “other kiddies,” suggesting the narrator and their partner are themselves kids, which strikes me as contrary to the spirit of the line “Romance can blossom any old time.” Perhaps even more disturbing is that this idyllic winter landscape somehow includes snowman-destroying bullies. I’d much rather kids pretend to get married than destroy someone else’s work. But then, a wise man once said, “And birds might fall from black skies, and bullies might give you black eyes, and buses might skid on black ice, but to me they’re very, very beautiful.” I believe some recordings of the song refer to a “Santa clown,” a rather odd concept that nevertheless explicitly brings Christmas into a Christmastime song that initially didn’t.

Figure 12.25: A Santa clown
It’s like Frosty the Snowman saying he’d be back on Christmas Day, or the birthday party in “Sleigh Ride” becoming a Christmas party instead. I do have to wonder if Parson Brown knows Farmer Grey. Maybe they’re characters in a holiday version of Clue. I just hope it isn’t the same Parson Brown from Tom Lehrer’s “My Home Town.” I understand that some of those spammy lyrics sites that annoy me but I still use sometimes when I can’t find anything better refer to “Possum Brown” and to alligators knocking down the snowman-clown, which would certainly make the song more surreal.

Not that possums and alligators can’t sing Christmas songs too.

While I’ve occasionally seen it suggested that the word “Eskimo” could be pejorative (I don’t think it was originally, but it might well have been used that way), that doesn’t appear to have made any impact on either “Winter Wonderland” or “The Christmas Song.” Perhaps it could be changed to “Inuit,” but then the first alternate rhyme that occurs to me for the latter is “Jack Frost nipping at your tit,” which defeats the whole goal of being family friendly.