Friends, has this ever happened to you? You finish a book but don’t write about it right away, because you can’t think of that much to say. Then you finish several others, but don’t have the chance to write, so there’s a significant backlog. Probably not, because I come up with weird rules for my blogging, and then don’t even always follow them. Anyway, here are some book reviews: 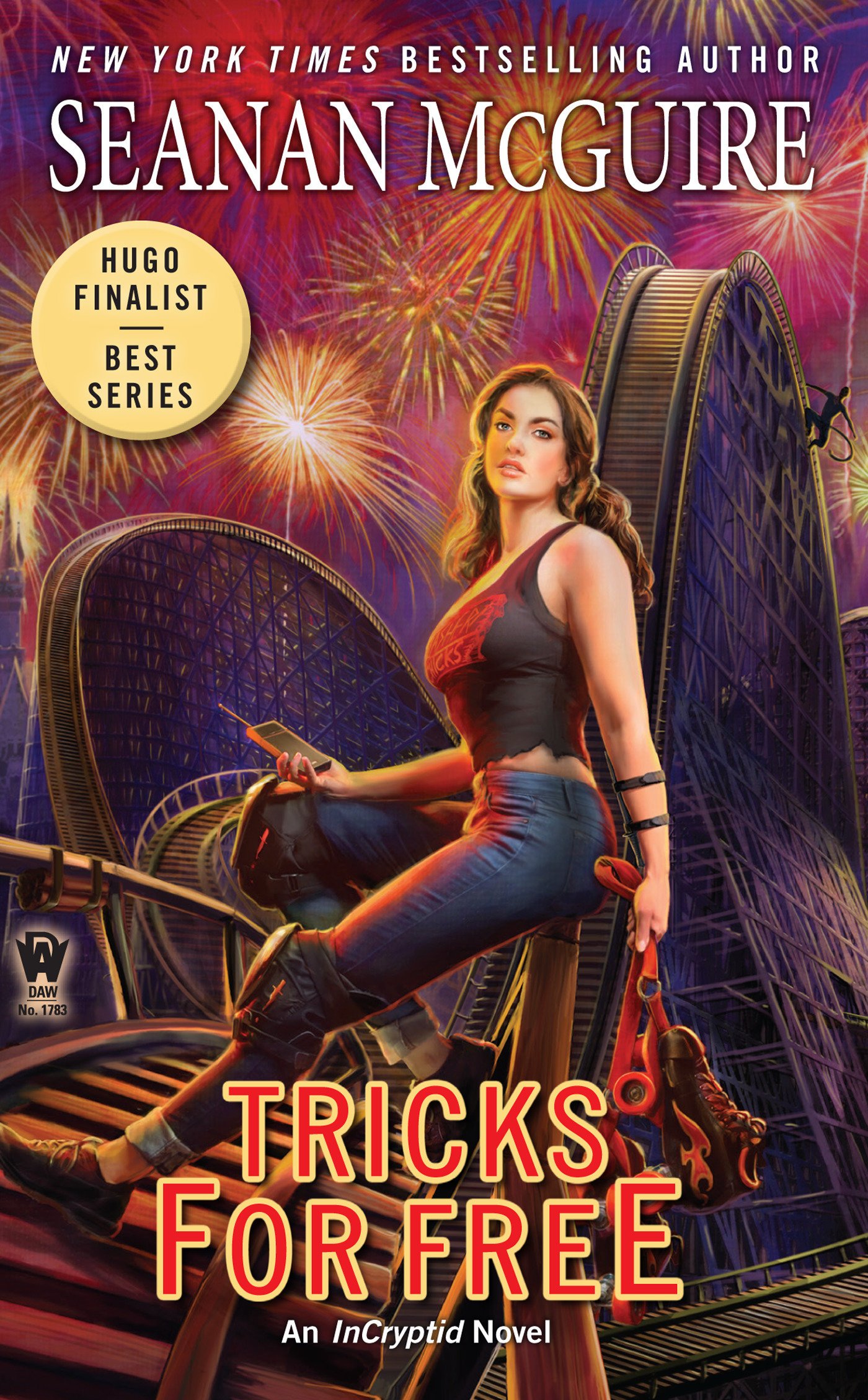 Tricks for Free, by Seanan McGuire – The seventh book in the InCryptid series again features the youngest of the Price siblings, Antimony, who is on the run after infiltrating the Covenant of St. George. She decides to hide out as an employee at Lowryland, an amusement park in Florida. Within this universe, Michael Lowry was a competitor to Disney who was never as successful, but still did well enough to open his own theme park with a lot of similarities to Walt Disney World.

One of Lowry’s most popular creations was an adaptation of Goblin Market, a poem that on its face is about a girl saving her sister from temptation by goblins, but is frequently interpreted as actually being about lesbian lovers. The author, Christina Rossetti, also wrote erotic poetry about women, so it’s not all that unlikely. It’s also been seen as a criticism of advertising. So that’s kind of stealthily subversive. Anyway, you can tell that McGuire had a lot of fun creating her own Disney-style theme park. There’s not as much plot as usual this time, although there is a secret cabal of wizards controlling the park, and some development of Antimony’s relationship with Sam Taylor. The Aeslin Mice don’t show up in this story, but they do have their own accompanying novella.

Archenemies, by Marissa Meyer – The sequel to Renegades continues the story of Nova, also known as Nightmare and Insomnia, an anarchist in a society led by superheroes who’s going undercover as part of the heroes’ society. It’s very much an in-between sort of book, as nothing really comes to a head with this plot; Nova ends up in pretty much the same place she started. Still, it’s interestingly philosophical, exploring Nova’s reluctance to fully commit to either side, and her budding relationship with the son of two of the top superheroes. I’m not totally sure if we’re supposed to sympathize with the Anarchists, who have some familial bonds with each other but are generally terrible people. The superhero leadership definitely has some problems, but they still seem better able to question their own motives. I guess I kind of wanted to see Nova make a clean break from the Anarchists, although it makes sense that she doesn’t, especially with her uncle back in play. Another new element this time is Agent N, a controversial chemical compound that can remove superpowers. And Nova’s job at the archives, which she takes in order to access her uncle Ace Anarchy’s helmet, has some tantalizing glimpses of powerful artifacts that exist in this world.

Super Extra Grande, by Yoss – I saw this mentioned on a list of humorous science fiction books, and it sounded interesting. The author, whose real name is Jose Miguel Sanchez Gomez, is a Cuban science fiction author and heavy metal musician who also has a biology degree. The story takes place in a world where a Cuban Jesuit priest discovered faster-than-light flight, and Earth has joined a coalition of worlds with their own strange life forms. The narrator works at a veterinarian specializing in giant animals. He’s also pansexual, and muses a lot about alien sex. The descriptions of various alien beings are quite creative and amusing. There isn’t a whole lot to the actual plot, however, and I’ve seen complaints about the narrator’s misogynistic attitudes. Much of the translation is in Spanglish, usually not too difficult for English speakers to understand, but a little difficult in parts.

My Son, the Wizard, by Christopher Stasheff – Matthew Mantrell, Prince Consort and Royal Wizard of Merovence (an alternate-world version of France), returns to his old New Jersey home to find it overrun with gangs and drugs. He brings his parents to his new home with him, and it turns out they’re able to work magic too. This is also the first book in the series to deal with the magical world’s Muslims. Since the historical period paralleled in the fictional world is one in which the Moors were making incursions into Spain, perhaps this was unavoidable; but it’s also a little difficult when it’s already been established that medieval Catholicism is literally true in that universe. The Islamic invaders turn out to be unwittingly following an evil sorcerer who operates in both worlds, and is also using a magical drug to recruit criminals in our world. When they find out about this, they turn away from him and end up peacefully settling in Ibile. This book also brings jinn into the series. It’s a little heavy-handed, but does make some interesting additions to the magical world and its connections to our own.

I also read Ovid’s Metamorphoses, translated by Allen Mandelbaum, but I don’t know that I can do a proper review of that one. It’s a collection of short poetic segments about Greco-Roman mythology, from the beginning of the world through Julius Caesar, covering the age of heroes, the Trojan War, and the founding myths of Rome. As indicated in the title (originally Metamorphoseon libri), it largely focuses on tales of transformation, often those of hapless mortals or nymphs by capricious gods. Love and lust are also frequently recurring themes. For all this, though, the style is pretty casual. It’s our main source for some of myths, like those of Arachne and Pyramus and Thisbe. I might explore some of the individual myths, particularly those of people turned into animals, in future posts.

2 Responses to I’m Going to Lowryland!