When Dorothy first comes to Oz, the Good Witch of the North tells her, “In the civilized countries I believe there are no witches left; nor wizards, nor sorceresses, nor magicians. But, you see, the Land of Oz has never been civilized, for we are cut off from the rest of the world. Therefore we still have witches and wizards among us.” Exactly what she means by Oz not being civilized isn’t entirely clear; it has cities (well, at least one), and agriculture is the primary profession.

So while it’s somewhat old-fashioned, it still seems to fit the basic requirements for civilization. And if you look at civilization in the sense of a polite, well-ordered society, you could potentially say they’re MORE civilized, as they have a cooperative society that mostly works. Even the animals of the Forest of Gugu have a society with laws to keep them from harming each other. But I suppose I’m getting ahead of myself. I can’t recall if the idea of Oz being uncivilized is stated again in later books, but the land does develop over the course of the series, and perhaps drifts away from L. Frank Baum’s original concept. The Oz of the first book is a very wild place, with travel through many areas incredibly dangerous. These wild areas remain throughout the series, but seem to be rather more isolated in Ozma’s time. And if we’re linking civilization to cities, we only see one of those in The Wonderful Wizard of Oz, and it was designed by an immigrant. The only other town is the one made of china, which is small and hidden within a wall in a largely isolated area.

There’s a Munchkin City in the MGM film, but not in the book.

In Land, Tip refers to the Emerald City as “the biggest town in all the country,” suggesting there are other towns, but not necessarily any other cities. Later, there’s a mention of the City of Winkies lying near the Tin Woodman’s castle, something not mentioned in Wizard, where we’re told that “there were no farms nor houses in this country of the West, and the ground was untilled.”

I always assumed the castle Nick Chopper is living in at this point is the same one where the Wicked Witch of the West lived, rather than his later Tin Castle, but it’s not entirely clear. There are plenty of farms in the Winkie Country in other books, too, so either the untilled ground and lack of roads was a local phenomenon or it was built up rather quickly after that. While not stated, it’s even possible that it’s a case of the land itself suffering because of a bad ruler (and one with magic powers, for that matter), a common enough trope, if one that doesn’t seem to have affected the Munchkin Country under the Wicked Witch of the East. This could even be true in a more mundane way, if the towns and farms in the area were simply abandoned during the Witch’s reign. Later in Land, when the Gump accidentally flies out of Oz, we read, “They flew over a village so big that the Woggle-Bug declared it was a city,” even though the Ozites should be familiar with that concept, as they’ve all been to the Emerald City. But maybe there’s something about this foreign city that makes it unrecognizable, and it’s probably in character for the Wogglebug to proudly inform everyone else of something they already know. (Would that be bugsplaining?) In Road, we’re told that “in the Land of Oz there were no towns or villages except the magnificent Emerald City in its center,” with Baum presumably (and understandably) forgetting the briefly mentioned City of the Winkies. But then, in the very next book, the characters visit several other towns. From an Oz-as-history perspective, I think this statement has to be taken in the sense that the other towns and cities in Oz are small enough as to not really register as such for a twentieth-century American reader. I’ve written about this before, including how Ruth Plumly Thompson’s Sapphire City has only around 1000 inhabitants, which I don’t think is even big enough to qualify as a town by modern standards.

Regarding the link between magic and lack of civilization, we’re told at the end of The Enchanted Island of Yew that, in the century during which the Red Rogue is trapped in his magic mirror, “Great cities had been built and great kingdoms established. Civilization had won the people, and they no longer robbed or fought or indulged in magical arts, but were busily employed and leading respectable lives.” This doesn’t say that magic is no longer possible in civilized countries, but suggests that people tend to abandon it when civilization takes hold. I always thought it was interesting that Dorothy’s objection to the GWN isn’t that witches never existed, but that “Aunt Em has told me that the witches were all dead–years and years ago.” It’s an idea we also see in Baum’s poem “Who’s Afraid,” that all the stuff from fairy tales existed at one point, but it was in the distant past. I have to wonder if that was a common idea in that time. Baum seems to treat the change as a trade-off of sorts; near the beginning of Yew, he writes, “In the old days, when the world was young, there were no automobiles nor flying-machines to make one wonder; nor were there railway trains, nor telephones, nor mechanical inventions of any sort to keep people keyed up to a high pitch of excitement. Men and women lived simply and quietly. They were Nature’s children, and breathed fresh air into their lungs instead of smoke and coal gas; and tramped through green meadows and deep forests instead of riding in street cars; and went to bed when it grew dark and rose with the sun–which is vastly different from the present custom. Having no books to read they told their adventures to one another and to their little ones; and the stories were handed down from generation to generation and reverently believed.” There’s a certain romanticizing of the distant past, particularly with the mention of the air being less polluted; but it’s balanced somewhat by the idea that “so many curious inventions of men have come into use that the wonders of Fairyland are somewhat tame beside them.” It’s sort of a fascinated but cautious approach, genuinely impressed by new innovations, but still wary of their potential dangers. Baum also suggests that modern times are generally safer than the olden days, not just because of the lack of dragons and giants, but of more mundane threats like robbers. And it’s not like Baum’s books don’t include some modern innovations. There are even some early science fiction concepts explored in a fantastic way. The Master Key, which takes place in our world instead of fairyland, has a generally positive attitude toward mechanical experimentation, but still maintains that there are technological advances humanity can’t handle. Baum’s fairylands can have electric light (which Queen Erma tells us in Tik-Tok was known by the fairies long before mortals discovered it) and then-modern toys and games, but the Ozites don’t think much of the phonograph or its popular music, although the technology does exist. 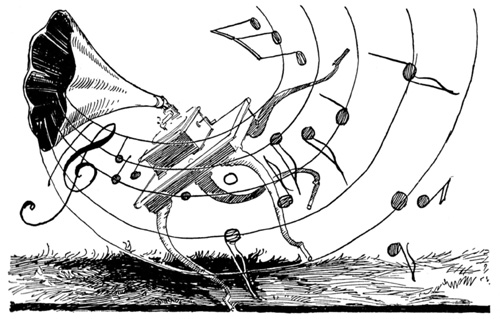 There are some automobiles, like the Auto-Dragons in Thi, but they’re not all that common (at least until John R. Neill’s Scalawagons come along); and the Wizard of Oz specifically wants to keep out airships. It’s also interesting that it’s the Shaggy Man who introduces the radio telegraph to Oz, when he’s someone who often lives off the land, even though he has a fancy home in the palace.

He also has a mobile phone of sorts in Tik-Tok, but we never see it again after that, probably more for plot reasons than because it’s too modern. Oz in particular remains quaint, but with some more modern elements, perhaps a conscious attempt to maintain some sort of balance where plenty of unspoiled wilderness remains and pollution is kept to a minimum. Indeed, despite having farms and towns, it’s Edenic in many ways: people are functionally immortal, animals talk, and wild plants provide prepared food and useful items.

If civilization is the enemy of magic, perhaps that’s why Baum felt it necessary to explain in Tin Woodman how Oz became a fairyland, when earlier books suggest that such is more or less the natural state of every place before civilization sets in. By this point, Oz had gained most of the hallmarks of civilization, so why it’s still so magical needs to be addressed. Or maybe I’m reading too much into that, but it’s an interesting idea I just thought of fairly recently.