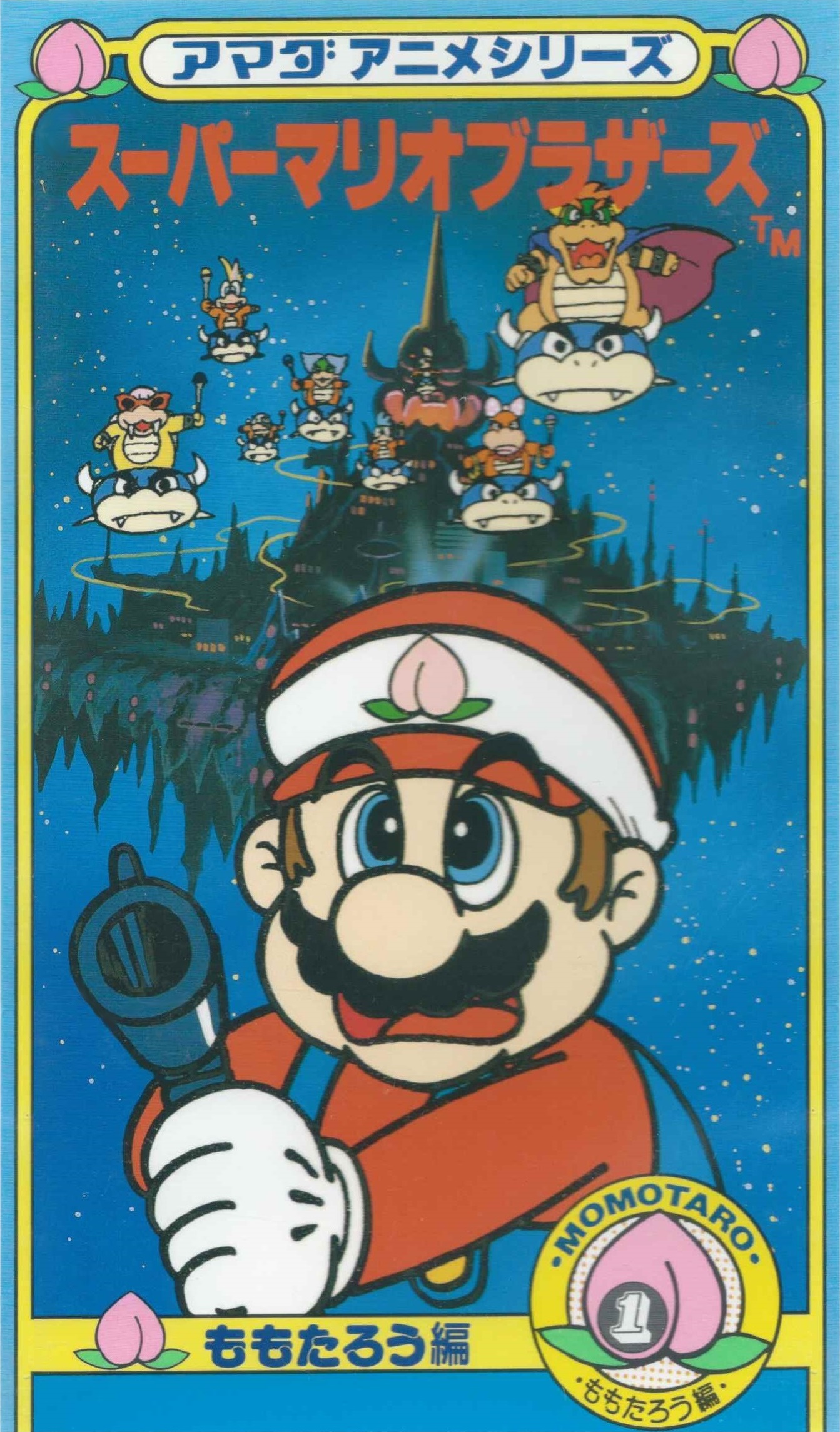 I grew up watching the American Super Mario Bros. cartoons, but it wasn’t until later that I learned about the Japanese ones from around the same time. I’ve discussed the anime film from 1986, but there was also a series of three fifteen-minute cartoons released in 1989, featuring characters from Super Mario Bros. 3. These were direct to video and are collectively called Amada Anime Series: Super Mario Bros., although I’m not sure whether Amada is the company that produced them or what. All three are based on fairy tales, using Mario characters to play the roles. It’s interesting because the Super Mario Bros. Super Show cartoons also often placed Mario and company into classic stories or movie plots. What’s different is that, while the American series certainly wasn’t known for its continuity, it kept the characters and their situations fairly consistent; it was the stories that were adapted around them in ways that fit into that universe. Whatever story they find themselves in, there’s generally still the overarching theme of King Koopa trying to conquer the Mushroom Kingdom; and power-ups, plumbing, and Italian food are usually worked into the tales. The Amada Series had no problem changing the characters to work with the tales, yet still took plenty of liberties with the source material. And the animation in these is very limited, even more so than in the American cartoons. All three are currently up on YouTube with English subtitles, although those don’t always stay put.

Super Mario Momotaro – Based on the traditional Japanese tale of Momotaro, or Peach Boy, it starts with Peach being raised by two elderly Hammer Brothers (if the female can be considered a Bro). She’s captured by Bowser and his Koopalings, minus Lemmy for some reason. Since this came out not long after SMB3, it’s not surprising that they show up, although only Roy has a line. They ride around on floating Koopa heads in this one.

The now lonely couple finds Mario inside a peach, wearing…Speedos or something. 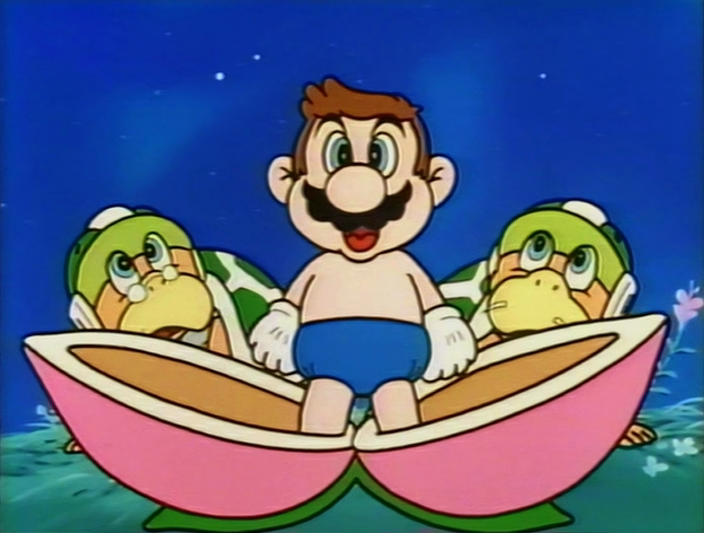 He grows up quickly and sets out to rescue Peach, who I guess is technically his adopted sister in this continuity. His parents give him some food and, strangely enough, a gun, which isn’t part of either the traditional story or any the Mario games so far (Yoshi’s Safari didn’t come out until 1993). The Koopas are also capable of space travel, and steal from planets throughout the galaxy. Mario never actually fires the gun, but he does threaten Bowser with it. 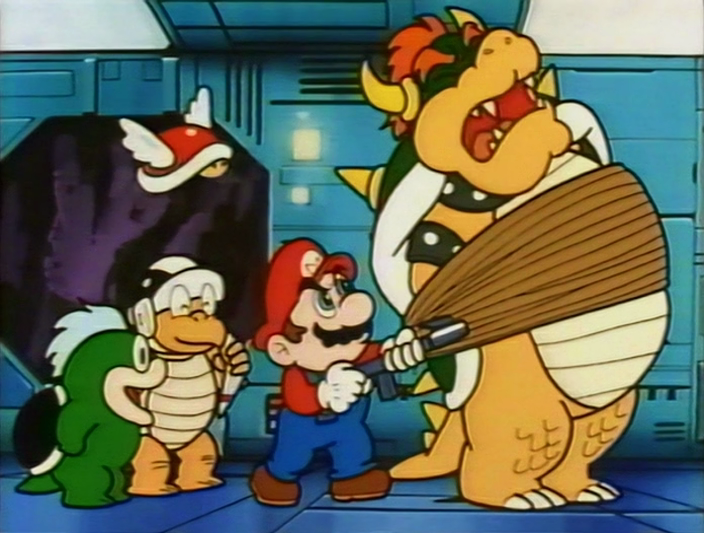 And the food isn’t identified as kibidango, despite the fact that there was a character named that in the earlier anime. Along the way, he meets the equivalents of Momotaro’s three animal companions, here played by a Para-Beetle, a Boomerang Brother, and a Spike. They travel in a rocket-powered boat to the Koopas’ fortress, beat up the bad guys, and bring back Peach and the stolen treasure.

Super Mario Issun-boshi – I’ve briefly looked at the story of Issun-boshi before. It’s similar to the tale of Tom Thumb, and this cartoon once again features a miraculously born child played by Mario. The parents this time are human, but we never see that much of them. Interestingly, though, what we see of the father does look like Mario’s rarely-seen dad in some other media. The tiny Mario sails off to adventure in a bowl, which a Lakitu sinks with a storm.

In a nearby city, he meets Peach, and Bowser is again trying to marry her. He attacks the Koopa King from inside his body with his needle sword, then cuts off his horns and eyebrows, causing him to run away (living to koop another day, I suppose). Then the Princess uses Bowser’s magic hammer to make Mario grow to his typical size, which is still shorter than she is. This one also utilizes the science fiction sort of setting. The city has monorails and flying cars, and even Mario’s parents’ humble house has a futuristic design.

Super Mario Shirayuki-hime – This one is based on Snow White, which as far as I know is a European tale without a Japanese equivalent. It also seems to take the most liberties with the story, although I didn’t notice any of the sci-fi designs from the other two. They had to fit in Mario and Bowser, and most of the male parts in the story are pretty minor. So the part of the Evil Queen is played by Bowser in drag. As of late, Bowsette has been a popular meme, and I saw some sexy female Bowsers online even before that. Queen Koopa in this isn’t one of those; she’s basically just regular Bowser with lipstick. 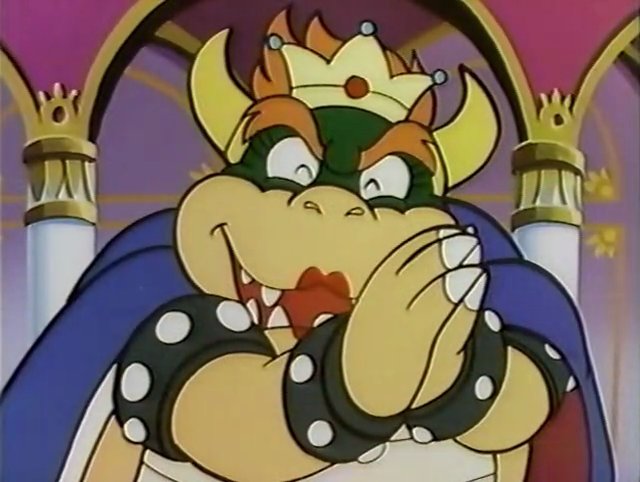 Somehow, however, the magic mirror still thinks he’s the fairest in the land, although Princess Peach in the next kingdom is even fairer. At least they didn’t go with Peach being his stepdaughter. The Queen sends some of the Koopalings to kidnap the Princess, but Mario fights them off and takes her to a house in the woods inhabited by the seven dwarves, who are also Toads.

That makes a certain amount of sense, as Mario rescues seven Mushroom Retainers in the original SMB. Bowser does the poison apple bit, but Mario shows up again and wakes her up, not with a kiss or by lifting her and knocking out the piece of apple, but with a magic potion. He’s sort of both the huntsman and the prince, I suppose. Then there’s an action sequence with Mario, Peach, and the Toads battling the Koopas. At one point, the Toads merge with Mario to make him grow larger. I guess they ARE technically mushrooms. The battle still seems hopeless, however, until Luigi shows up out of nowhere to help out. This is his only appearance in the series, which makes it all the weirder and more amusing. And contrary to how he’s often portrayed, he’s pretty bad-ass here.

If you haven’t seen these, you’re not missing much, but they are interesting novelties. They fit with Shigeru Miyamoto’s idea about the Mario characters being a troupe of actors, as there’s no attempt to work them into the already loose continuity for the series, or even make them consistent with each other. If the story calls for Mario to be born in a peach and raised by Hammer Bros, then that’s what happens. And the mechanics of the games are only briefly touched upon.

2 Responses to The Brave Little Plumber