But Aquaman, You Cannot Marry a Woman Without Gills!

Aquaman – I can’t say I know too much about the character, aside from that he’s the butt of a lot of jokes for his clean-cut persona and seemingly useless powers. From what I’ve read, the comics have addressed that by trying to make him a more serious character. The take in this movie, I think, is that of a big, rugged guy, but not a brooding antihero by any means; he can be a bit of a jerk sometimes, but is generally likeable and identifiable. You could say he’s an ordinary guy with extraordinary powers, which is what people say Marvel does more often than DC. They also wanted to show just how powerful he can be.

Even on land, he’s strong enough to survive jumping out of a plane into the desert with only minor injuries; but it’s obviously in the water that he really shines. The film starts by showing a flashback to how Aquaman’s father, Thomas Curry, met his mother, Queen Atlanna, when she washed up near his lighthouse. Then there’s a short scene where a young Arthur telepathically controls a shark at a class trip to an aquarium. Finally, we get into the present, where Aquaman saves the crew of a Russian submarine from pirates. The main story gets going when Princess Mera, who is betrothed to Arthur’s half-brother Orm, recruits Arthur to find the trident of King Atlan, first ruler of Atlantis; and by doing this prevent Orm’s plan to reunite the seven kingdoms and make war on the surface world.

After being thoroughly trounced in a fight with Orm, Mera rescues Arthur and accompanies him on a worldwide treasure hunt, Indiana Jones style. The relationship between the two of them, constantly bickering but obviously caring about each other, even seems reminiscent of something that would have involved Harrison Ford. The hunt brings them from the Sahara to Sicily to the Marianas Trench to a hidden subterranean world.

This part feels a little rushed in that they’re able to interpret the clues without any obvious trouble or red herrings, but Arthur does get the chance to show off his extensive knowledge of Roman history. And how did they get from the Mediterranean to the Pacific that quickly and easily in that small boat? In an underground country beneath the Trench, they find not only the trident, but Arthur’s mother, who was presumed dead. Aquaman also gains the loyalty of a giant sea monster with the voice of Julie Andrews. After that is a great undersea battle from Atlantis, resulting in Arthur being crowned king and Orm being locked up. There’s another villain besides Orm in Black Manta, the leader of the pirates, who wants revenge on Aquaman for leaving his father to die on the submarine at the beginning of the movie. While he’s allied with Orm and has some cool powers based on Atlantean technology, he seems a bit tacked on, showing up for the occasional fight scene and then fading into the background again. 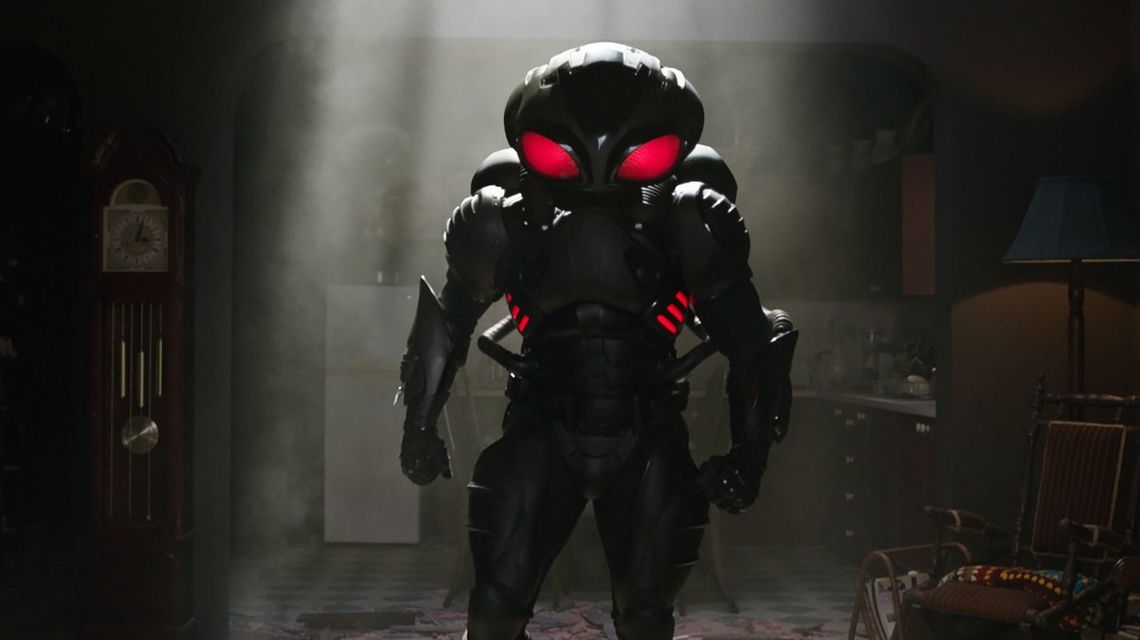 The ending indicates that he’ll most likely return in a later movie, though. And I did appreciate that, in light of the fact that this whole series of interconnected DC movies started with one where Superman killed someone (I haven’t seen Man of Steel, but everyone talks about that part), Arthur actually feels somewhat responsible for Manta’s father’s death when he abandons the two pirates in the submarine. This leads to his refusing to kill Orm even when his half-brother tries to convince him to do so.

I tried to look up how closely the characters and their abilities and back stories line up with those in the comics, but it looks like it’s been rebooted so many times that there isn’t really one canonical origin story from Aquaman or any of his side characters. It does seem like everything is at least based on SOME incarnation of the comics’ Aquaman. I really liked the idea of the fragmented and diverse Atlantean kingdoms spread throughout the world, including one inhabited by giant crustaceans.

Apparently different inhabitants of Atlantis evolved really quickly in different ways, some remaining basically human and others coming to resemble other sea creatures. There’s a brief line by Mera explaining that only royalty and nobility are able to breathe both land and water, which is why the soldiers have to wear those water-filled suits when going to the surface. It’s pretty classist, but there you go. On the other hand, the telepathic communication seems to be something only Arthur can do. He doesn’t have Mera’s healing or illusion-creating powers, however. Not surprisingly, the movie is quite visually appealing, with all its beautiful and monstrous views of the underwater world.

I also think the movie tended to wear its influences on its sleeve. Tom says he wants to name his son Arthur because he’ll be a king, so it’s not surprising when he has to pull a weapon out of a stone figure to prove his worth. It starts with a quote from Jules Verne, and later there’s a visit to an underground country with prehistoric animals and its own sea. And there’s a glimpse of a Lovecraft book on Tom’s table, paving the way for the appearance of an eldritch abomination. Speaking of references, is there some other precedent for undersea dwellers being able to shatter glass by screaming, or was that based on Splash?