Dinah, Won’t You Blow Your Horn? 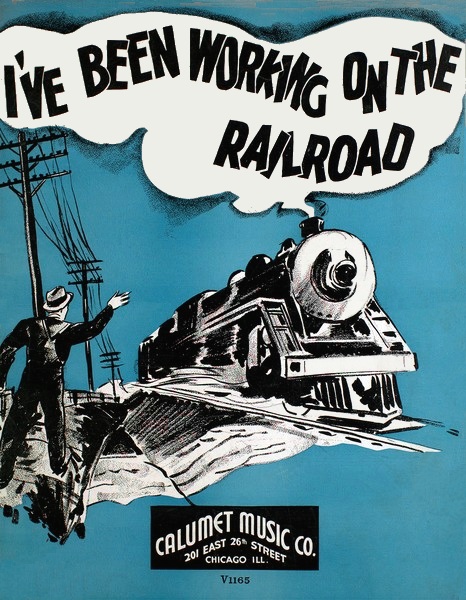 I remember thinking when I was a kid that, in the song “I’ve Been Working on the Railroad,” Dinah was actually the train. I’m don’t know that I was entirely sure about it even then, as how could a train be in the kitchen, but I still thought it worked. And, as this discussion indicates, apparently I’m not alone. The person who suggests it thinks the idea might have come from an animated short, which would make sense, but what cartoon would that be? I think my idea might have had to do with a misinterpretation of what it meant to work on the railroad, which is to say I thought in terms of being an engineer or conductor on a train, when it’s more likely about BUILDING the railroad, which means the trains wouldn’t have been there yet. There’s also a more likely and more offensive meaning for “Dinah,” as it was apparently used to refer to any enslaved woman. And the reason the “someone’s in the kitchen with Dinah” bit seems like a totally different song is…because it is, or at least was. It predates any known version of “Railroad,” dating back to the 1840s or so. Back then, it was known as “Old Joe, or Somebody’s in the House with Dinah,” and intended to be performed as a bit at a minstrel show. And it looks like what somebody was originally doing with Dinah was having sex. I’m not sure how a house in general became a kitchen specifically, but apparently the kitchen was often part of minstrel songs, I guess because it’s where black servants would have often worked. The tune of the “Dinah” refrain is thought to have been derived from that of “Goodnight Ladies,” while the lyrics to the verses have similarities to “Old Dan Tucker.”

The actual “Railroad” song is first known to have been printed in Carmina Princetonia in 1894. It includes the line “Dinah, blow your horn,” but not any of the rest of the stuff about Dinah. It does appear, however, to have included part of another unrelated song. And like “Old Joe,” it’s written in exaggerated dialect. The question remains as to whether it was an actual work song or just an imitation of one, perhaps written in-house at Princeton University. Regardless, my suspicion is that the railroad and kitchen parts were originally sung in a medley, as those often include mix together songs with lyrical similarities. If so, it’s interesting that the medley version is what everyone knows, but that sort of thing happens all the time. It makes a certain amount of sense if you interpret Dinah as the cook, in which case she’s supposed to blow the horn for dinner but is distracted by “someone,” regardless of whether they’re getting it on or having a jam session.

The reason I thought to look up this song has to do with a recent podcast about They Might Be Giants discussing the Lincoln album, as “Where Your Eyes Don’t Go” incorporates the “someone’s in the kitchen” part into the instrumental break.

It doesn’t include the lyrics (although the band has been known to sing them live), but when taken with the song, it takes on a creepy quality. After all, we don’t know WHO’S in the kitchen with Dinah. The ending of the song has been suggested to have been inspired by a few different TV theme songs. I wasn’t familiar with the Perry Mason theme at the time I first saw this suggestion, but I later found out that it’s directly incorporated into the Pixies’ “Space (I Believe In)” from Trompe le Monde.

Black Francis even says, “Now I’m gonna sing the Perry Mason theme!” And of course Black Francis (AKA Frank Black, really Charles Thompson) has collaborated with TMBG on several occasions. Getting back to “WYEDG,” I like the part of the outro where the loud drumbeat comes in, because it kind of sounds like it’s running to catch up. Does that make any sense to anyone else? I have a few new TMBG releases to write about still, but it’s a lot to absorb, so I’m not sure when I’ll be ready to post a review.

Like Loading...
This entry was posted in Frank Black/Black Francis, Music, Pixies, Prejudice, Television, They Might Be Giants and tagged carmina princetonia, goodnight ladies, i've been working on the railroad, medleys, minstrel shows, old dan tucker, old joe, perry mason, racism, slavery, somebody's in the house with dinah, someone's in the kitchen with dinah, space (i believe in), trains, where your eyes don't go. Bookmark the permalink.

1 Response to Dinah, Won’t You Blow Your Horn?