Don’t Be a Heel, Achilles

Glory of Heracles – Released for the DS in 2010 (2008 in Japan), this is actually the fifth game in a Japanese series (sixth counting a spin-off), but so far the only one to be translated into English. And I don’t think it got great reviews, so I suspect we’re not going to see the others stateside anytime soon. For that matter, there haven’t been any more Japanese follow-ups in the past eleven years. I’d held off on buying it before, but since it does combine two of my interests, Greek mythology and fantasy role-playing video games, I eventually put it on my Amazon wishlist and received it as a gift last year. The creators clearly had pretty good knowledge of the myths, which isn’t to say it’s entirely accurate to them, but there are quite a few references that show more than a passing familiarity. It takes place in and around Greece; I recently played the parts in Troy and Cyprus before going back to Greece for a visit to Athens, and I understand there’s a later segment in Egypt. At the same time, it’s also a typical Japanese RPG world. Shops in each town sell weapons, armor, and magic items. All of your party members can cast spells, the explanation for the proliferation of magic being devices invented by Daedalus called taphoi, which collect ether. Another sort of magical machine that plays a major role in the game is the Crasis, which produces undead soldiers. There’s a lot about soul transference as well, and the god Oceanus is said to have been split into several individuals by Zeus. And the Trojan Horse, instead of just being a way to sneak into the city, is a mobile battle station that crashes right through the gates of Troy.

Your party changes around a bit, but eventually it settles on five characters, all immortal and all suffering from amnesia. Both the protagonist and another party member think they’re Heracles, and you meet yet another contender who’s a general in the Trantian Army. (While most of the place names seem to be real, I don’t think there was ever a place called Trantia, so I’m not sure what that’s supposed to mean.) Other party members are Leucos, a girl trying to live as a boy but with a poor disguise; the egotistical Axios; and the sassy and magically skilled teenage girl Eris. 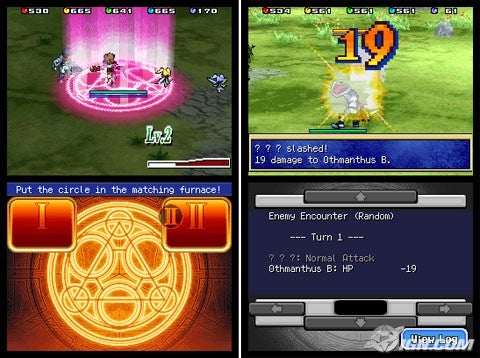 There are a lot of random battles, set up with the enemies in rows; you need ranged weapons or magic to attack the ones in the back. There are also a lot of skills you can learn that help you out, but are really hard to keep track of. Some will restore hit points or magic power, and others give an extra attack when a monster is low on hit points. You can boost the effects of spells by playing some simple mini-games. There’s also only a certain amount of ether that can be used per turn, and many spells drain a lot of power. It’s much more complicated than it needs to be, because most of the time a basic knowledge of how turn-based RPG battles work will get you through, some boss battles being a bit of an exception. So far, it hasn’t been particularly difficult. You accumulate experience and money pretty quickly, so there isn’t a need for a lot of grinding. I have had trouble with a few bosses, but most of the game is pretty straightforward. I’ve seen reviews mentioning that the game doesn’t really stand out and isn’t particularly challenging, but those are fine with me as long as it’s still fun. It gets a bit tedious sometimes, but the script has a good amount of humor, which helps keep it interesting. Characters will make quips in battle, which is fun at first, although later on I usually ignored them. That doesn’t mean they interfere with gameplay at all, just that they’re the same lines over and over. There are some good video game in-jokes as well. Someone mentions “a secret to everyone,” and Pit is suggested as a name for the protagonist who’s forgotten his own (to which the response is that it doesn’t even sound Greek). So yeah, I’ve been enjoying it, and I’m interested in how some of the mysteries play out; but I wouldn’t say it’s a must-play.

1 Response to Don’t Be a Heel, Achilles