Captain Marvel – While I didn’t look that closely into it, there was apparently a lot of preemptive criticism of this movie because…it starred a woman, I guess? I know misogyny is still prevalent in our society, but I didn’t think it was that blatant, at least outside the Trump administration. But then, it might have worked in the movie’s favor. Although I don’t have any real evidence, I think people who weren’t normally into superhero films saw Black Panther to spite the racists. I’d read some of the comics featuring Carol Danvers, and quite liked her as a character, so I was looking forward to this one anyway. There were a few different Captain Marvels in Marvel history, and that’s not counting the ones from other publishers. I don’t think it’s a coincidence that there’s a DC Shazam! movie being released so soon after this one. The first one in Marvel was Mar-Vell, a Kree alien warrior. In 1968, Carol, then an Air Force security officer, was caught in an explosion that resulted in Mar-Vell’s DNA fusing with hers. In 1977, she started her own heroic career as the scantily clad Ms. Marvel, who at first was unaware of her true identity. 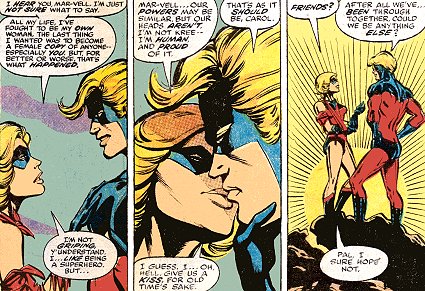 She didn’t take up the mantle of Captain Marvel until 2012, and one of the interim holders of that name was Monica Rambeau, a harbor patrol officer who obtained the power to turn into an energy form.

As is typical for the Cinematic Universe, Carol’s back story in the movie incorporates a lot of elements from the comics while not being totally beholden to them. Most of the film is set in the 1990s (specifically 1995, although there are some anachronisms), and I’m not entirely sure why, as that means she was active before most of the other heroes, unlike in the comics. They definitely have fun with it, though, using hit songs and showing fashions from the decade, showing a Blockbuster and Radio Shack, and making jokes about slow and unreliable Internet. Stan Lee’s cameo, which I believe is the last one he filmed, has him practicing his part in Mallrats, which is funny but confusing. The reason he was in that movie was because of his fame as a comic book writer, but in this universe, not only are all the characters he created real people, but most of them hadn’t started their careers until fifteen or so years later on. Maybe he wrote totally different comics in that world. It’s interesting how both DC and Marvel made their first female-led film a prequel.

The movie starts out with Carol, called Vers (pronounced with a long E), serving in the Kree Starforce in a war against the shape-shifting Skrulls, who were introduced in an early Fantastic Four comic. She crash-lands on Earth, where the Skrulls are seeking a scientist who invented a faster-than-light engine.

After meeting up with a young Nick Fury, she eventually finds out that not only is she from Earth, but her mentor had been the scientist in question, the rogue Kree Mar-Vell, going by the name Wendy Lawson. The decision to change Mar-Vell’s gender was apparently a later one, so Carol could be surrounded by supportive women. Monica Rambeau also appears as the young daughter of Carol’s longtime friend Maria. I have to wonder if we’ll see her as an adult in later movies. In 1989, Carol and Mar-Vell were shot down by the Kree while testing the lightspeed engine. The scientist dies and Carol destroys the engine, with the resulting explosion giving her super powers and removing her memory. The Kree take her back to their homeworld Hala (in the Large Magellanic Cloud according to the comics, but I don’t think the films ever specify), give her a blood transfusion, and inhibit her powers. They call her “Vers” because that’s what on the broken-off piece of her dog tag that they find with her. All this would have been a lot more difficult if the Kree didn’t look just like humans, only with blue blood. Okay, some of them have blue skin as well.

She also finds out that, contrary to what she’d been taught, the Kree were the aggressors in the war, and the Skrulls just want to find a home. It seems like, whenever fiction employs the “hey, the villains were actually good all along” trope, they do some pretty nasty and suspicious things before the revelation, and this is no exception. Other characters who make appearances here are Ronan the Accuser, the villain from the first Guardians of the Galaxy film; the Kree Supreme Intelligence; and Carol’s pet Flerken, an alien species that looks just like a cat, but has the power to extend tentacles from its mouth and transport things it swallows into a pocket dimension 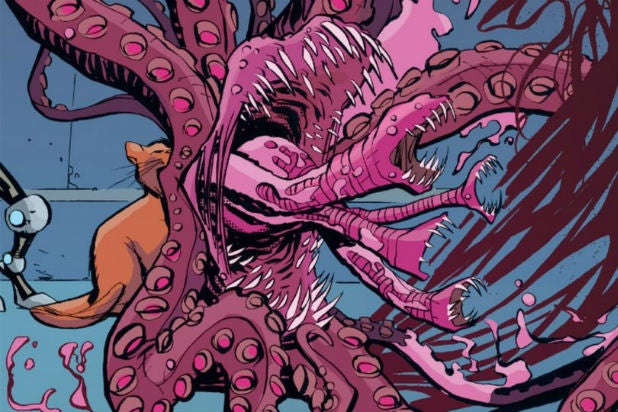 Having the same basic attitude as a cat, however, it only does these things when it wants to, not when people want it to. In the comics, the Flerken is named Chewie after Chewbacca, as Carol is a big Star Wars fan. Even though Disney owns both Marvel and Star Wars, the movie names the Flerken Goose instead, and makes him originally Mar-Vell’s pet. We find out why Carol hasn’t been around for any of the previous Marvel films; and we do see how Fury loses an eye, but with a few fake-outs beforehand. Even though it seems like the industry is inundating us with superhero films these days, the ones I’ve seen recently were quite good; and this was a lot of fun.