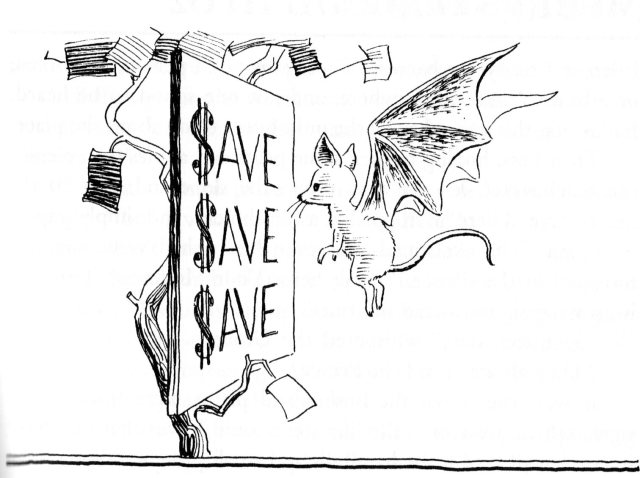 Maybe it’s because of role-playing video games where you have to buy a bunch of stuff for your quest, but I tend to associate fantasy lands with wandering merchants. That sounds so much classier than traveling salesmen, even though I don’t know that there’s any difference. Oz really doesn’t have that many, being a land where money is rarely used, but a few managed to sneak their way in anyway. For an Oz story I just finished writing (well, the rough draft, anyway), I thought of putting together as many as I could for a convention of sorts. Actually, the first case I can recall of people traveling around and selling things in an Oz book is the inhabitants of Kimbaloo in Ruth Plumly Thompson’s The Lost King of Oz. The boys take the King’s Highway into the Gillikin Country and sell buttons for coins. The girls, meanwhile, sell bouquets in the Winkie Country, which they reach by the Queen’s Highway. This description tells us that there are “no stores in Oz,” which should be taken about as seriously as all the other statements that Oz doesn’t have something that it totally does in another book. The next entry in the series, Hungry Tiger, introduces Carter Green the Vegetable Man, who sold vegetables and fruits to Ozian royalty.

When he arrives in the Emerald City, Betsy Bobbin observes that she “never heard a huckster calling around here before.” And the talking door in the Kingdom of Doorways in Cowardly Lion thinks Notta Bit More and Bob Up might be selling brushes. Wishing Horse has a mention of a peddler to whom a woodcutter trades Wam’s emerald wishing necklaces, the value of which neither of them know, for a new axe. He’s said by Bitty Bit to have brought the necklaces to Skampavia where jewels are rare, and traded them to another merchant named Matiah, who plays an antagonistic role in the story. At the beginning of the book, Twobyfour says that the peddler who sold them to Matiah “had got them from a Gilliken [sic], who had got them from a Quadling, who had got them from a Munchkin, who had once lived in the Emerald City of Oz.” According to Bitty, however, there was only one Ozian peddler involved. Roundabout in Eloise Jarvis McGraw’s Merry Go Round is a city of peddlers who sell round things that never wear out.

When they run out of customers, they instead begin selling their national dish, Pi. Dick Martin’s Ozmapolitan not only mentions merchants who bring their wares into the Emerald City, but there’s a traveling salesman character named Chauncey Chance. Due to his girth, people call him Fat Chance, and he seems to be okay with this. (I don’t think I would be.) He rides a wagon drawn by a polite burro named Miss Annabelinda, who considers herself to be in a reciprocal relationship with Chance.

The man mentions selling all kinds of items throughout Oz, but is never clear on what people pay with, aside from a reference to trading jet earrings to a Quadling woman in exchange for an apple pie.

In less official books, there are a few others. Harry Mongold’s Button-Bright introduces Packer, a wandering trader who collects ivory and worries a lot. Why ivory, I’m not sure, but there might be way to get that in Oz without killing elephants. He’s also mentioned in a few other books. March Laumer’s Magic Mirror has Levimeyerabloch, or Lev for short, son of Ritzeplummereczech. Laumer loved using long compound names like those, and hints that they’re all related. Lev is a peddler who speaks in a Jewish dialect, which is part of why Till Orangespiegel calls him “Oy.” His companion, the Charming Cheetah, pulls his cart. He’s also identified in Uncle Henry and Aunt Em as the peddler from Wishing Horse. And speaking of Jewish merchants, there’s Chuck Sabatos’ “The Merchant of Oz” from the 1993 Oziana, based on Shakespeare’s The Merchant of Venice. The equivalent of Shylock is called Boldkey the Blue, although his original name is Marvin. 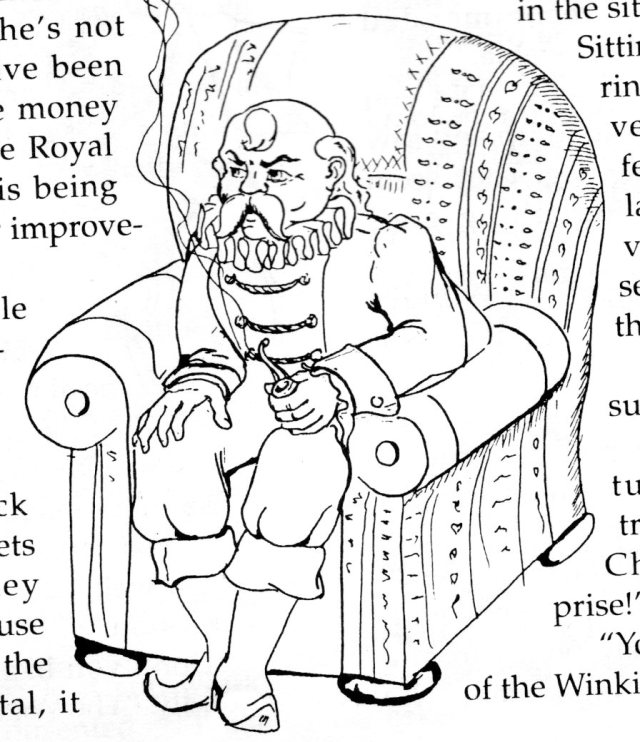 He’s not portrayed as stereotypically Jewish, but is quite proud of his Munchkin heritage. He’s also jealous of Nick Chopper as they were rivals for the hand of Nimmie Amee, so when the Tin Woodman needs to borrow money, Boldkey lends it to him in exchange for the promise of a pound of his tin. The moneylender is also the father of Margolotte, Dr. Pipt’s wife. Nick’s troubles are part of why Ozma abolishes money in Oz, and Boldkey is made to drink the Water of Oblivion, after which he becomes the butler at the Tin Castle.

EDIT: One character I remembered when writing my story but not when I wrote this post was Jandar, a character mentioned in Lin Carter’s Merry Mountaineer as the father of the protagonist Jandy. An inhabitant of Mount Mudge in the Munchkin Country, he’s described as “a merchant whose trading trips had taken him as far north as Shamsbad and as far west as Quix in the Quadling Mountains, and even to Posh in the Pink Desert.” These latter two places are never further explored, but there is a mention of Quix and some of its inhabitants in Carter’s Tired Tailor. It’s not clear whether it’s related to the Quix of Quick City in the Winkie Country. Jandar’s fate is unknown, as he never returned from his last trading trip, but his son takes after him in terms of wanting to leave home and explore. And Erica Olivera mentioned that the Braided Man is also a salesman, although he probably doesn’t travel much, being stuck in Pyramid Mountain as he is.