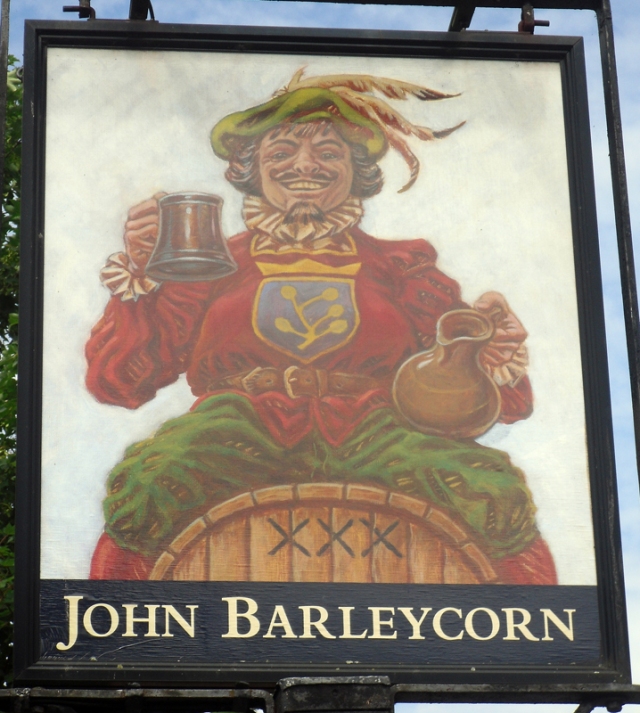 “John Barleycorn” is a British folk song with written versions dating back to the sixteenth century, personifying the barley crop as a dying and reborn figure. It can get pretty graphic about the torments heaped upon poor John, who is reaped, threshed, and malted by various people. I guess it’s not too often we get a narrative from the perspective of the grain. Since people then drink his blood, which would be beer and whiskey, there’s a Christ-like quality to the character. And he’ll then be reborn when the crop grows again.

Apparently the barley harvest in Israel takes place at the beginning of Passover, so there’s another connection. But then, Jesus is only one of many dying and rising gods in mythology and folklore, the concept often being connected with crops and the changing of seasons. An author named Kathleen Herbert proposes a link between John Barleycorn and an earlier Anglo-Saxon deity called Beowa, which means “barley.” There’s a strong link between religion and alcohol anyway, whether it’s encouraging or forbidding the substance. The song generally speaks positively of the beverages made from barley, but there are versions where John gets his revenge through the harmful effects of alcohol. Personally, I’m not a fan of beer, but I might have had to become one if I’d lived in Britain in a certain period of history. I can see how other people might like it, but I’ll pretty much only drink fruity alcoholic drinks. I don’t think I’ve ever tasted straight whiskey at all.

One of the most famous versions of the Barleycorn song is the one by Robert Burns from 1782. In 1970, the band Traffic released their take on the song, called “John Barleycorn Must Die.”

Two of my personal favorites also did their own takes on the theme. The Minus 5’s 2001 album Let the War Against Music Begin has a catchy number called “John Barleycorn Must Live,” which Scott McCaughey has said he wrote because he feels sorry for the guy after all the people singing about how he has to die.

I couldn’t find just that song on YouTube, so this is the whole album, with “Barleycorn” starting at 30:04.
And Frank Black had “Johnny Barleycorn” on his 2006 album Fast Man Raider Man.