Lightning with My Hands

Shazam! – SPOILERS! Hey, it’s that movie where Sinbad is a genie! No, seriously, while I can’t say I’m familiar with the comics in which he’s featured, I’ve looked into the history of the character, who was the original Captain Marvel, but then lost the name in a trademark dispute. He’s still sometimes called Captain Marvel, but comics featuring him have the title “Shazam!”, the magic word that he uses to transform, and the name of the wizard who gave him that power. And sometimes he’s just called Shazam. The movie plays on this by having him never decide on an official superhero name, instead running through a bunch of mostly really silly ones. The property was made into a film serial in the early forties. And in the seventies, Shazam! was a live-action TV show about a teenage boy riding around in a van with an old man. The seventies were a strange time, from what I hear; I personally was only three when they ended.

If you’ve seen the previews, you know that this is the goofy, humorous entry in the DC Expanded Universe, so of course it starts with a kid being abused by his dad and brother, then that dad being maimed in a car accident. Then another kid loses his mom at a midway, which seems familiar. The wizard Shazam, the only survivor of a group of seven, chooses to give his power to Billy Batson, because he’s so pure of heart. He demonstrates this by lying, stealing, and running away from foster homes. I guess it’s not about being a goody-goody so much as it is being able to resist corruption by evil forces. I noticed a clear similarity to Big in the commercials, which was intentional, even having a brief appearance by one of those floor pianos. In addition to thwarting some crimes and testing out his newfound powers, Billy also takes advantage of his adult superhero form to buy beer, visit a strip club, and skip class. It’s not all that far-fetched, is it? Unlike in Big, though, he doesn’t date any adult women, hence avoiding implications of statutory rape. Good call on that one. The villain of the piece is Dr. Thaddeus Sivana, a mad scientist who’s been a major antagonist of Billy’s over the years. The back story in the movie makes one of the kids Shazam tested before. He failed, but researched the phenomenon until he was able to return to the wizard’s castle and join forces with demons representing the Seven Deadly Sins.

In order to fight the super-powered Dr. Sivana, Billy transfers some of his own power to his foster siblings. Freddy Freeman and Mary Bromfield were parts of the Captain Marvel family from early on, as Captain Marvel Jr. and Mary Marvel. The others, Darla Dudley, Eugene Choi, and Pedro Peña, were introduced into the comics considerably more recently. Also worthy of note is that the movie takes place in Philadelphia, and I grew up not too far from there. From what I’ve read, Billy originally lived in New York, but when DC bought the rights they made him a resident of Fawcett City, after the original publisher. The film has the kids attend Fawcett High School, even though I’m fairly sure some of them are too young to be in high school. Other villains from the comics, Mr. Mind and the Crocodile Men, also make brief appearances; and there’s a mention of Black Adam, who was originally planned to appear in the movie. 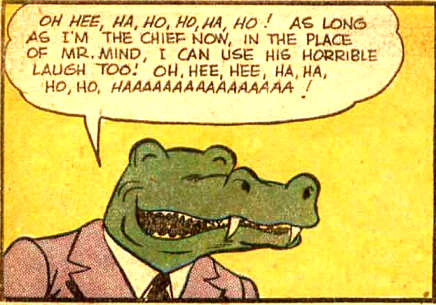