Let Us Contemplate the Sadness of a Banjo-Playing Frog

One thing I noticed in the book Yama Yama Land, by Grace Duffie Boylan, was a reference to a giant frog playing a tennis racquet like a banjo.

Picture by Edgar Keller
So what’s the connection between frogs and banjos? I’m sure you know about Kermit, but he’s hardly the first.

There’s some speculation on this thread from a banjo forum. Apparently there were a lot of pictures of frogs playing banjos as far back as the Victorian era. Before that, the frogs more often played fiddles. I guess there’s an association with the American South, what with the swamps and the popularity of the instrument there. There’s also a frog CALLED a banjo frog, actually two different species native to Australia, with a call that sounds kind of like a banjo string being plucked. This page has a sample of the sound. They’re also known as pobblebonks.

Picture by Matt Clancy. Source: Backyard Buddies
When They Might Be Giants did music for an issue of McSweeney’s, one of the songs was actually by their occasional collaborator Mike Doughty of Soul Coughing, although it was recorded by John Flansburgh. It’s called “Frog and Banjo,” and it accompanies a comic by Chris Ware called (to use the full title) “A Very Sad Story About a Frog and a Banjo, Not at All Appropriate for Children.”

The titular frog, who’s very lonely, sells his legs to a restaurant to buy a ring for a princess, only to have it stolen by the mailman. The song isn’t about the comic (most of the songs for this project really aren’t, except in a general thematic way), but goes with the general theme of a frog playing a banjo being the saddest thing in the world, and features Doughty arguing with himself. Kermit never seemed that sad about it, though, did he?

While not strictly related to banjos, the song “Froggy Went a-Courtin'” came up on the forum thread, and I believe there are versions of the old folk song that do mention a banjo. The song was first known to have been published in Scotland in 1548. Old English titles for it include “A Frog He Would a-Wooing Go” and “A Moste Strange Weddinge of the Frogge and the Mowse.” It’s an unconventional sort of marriage, to be sure. As most nursery rhymes and songs are eventually interpreted politically, this one is sometimes said to be about Queen Elizabeth I’s proposed 1579 marriage to the Duke of Anjou, whom she was known to call “Frog.” As I’ve mentioned, the song existed before that, but it’s possible it was used in this context at the time. There are several different versions of the refrain, older ones including “kitty alone” or “cuddy alone,” “humble-dum, humble-dum, tweedle, tweedle, twino” (associated with spinning), and “with a rowley powley gammon and spinach, heigh ho! says Anthony Rowley.” That the demon Crowley from Terry Pratchett and Neil Gaiman’s Good Omens has the first name Anthony is a reference to this last one. And there’s a Tom & Jerry cartoon where Jerry’s uncle repeatedly plucks out Tom’s whiskers to use as guitar strings, and he uses the refrain “crambone.” When we sang it in music class in first grade, I believe we just used a repeated “mm-hmm.” Some versions have various animals as wedding guests, and the whole thing often ends with Froggy, and sometimes his guests as well, being eaten by some other animal. That’s what you get when an amphibian tries to marry a mammal, I guess. While the bumblebee who attends usually seems to have a fiddle, he does sometimes have a banjo instead. 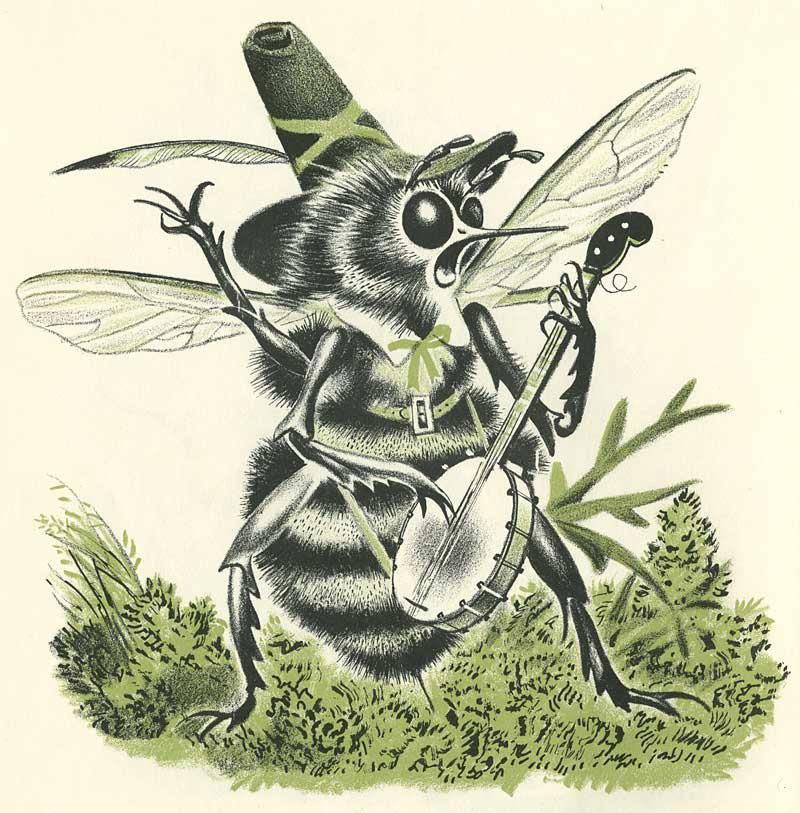 Picture by Feodor Rojankovsky
Not surprisingly, there was a version of this song with Kermit, in a segment from The Muppets Valentines Show, originally aired in 1974. This retelling involves Kermit getting into a fight with a giant mouse.

Miss Mousey would later reappear as a rival for Miss Piggy in the Bernadette Peters episode of The Muppet Show.