You Always Lose with Impundulus

I’ve written a bit about thunderbirds before, but I’ve only recently come across their African counterparts, lightning birds. They’re part of Zulu, Pondo, and Xhosa culture; and beliefs about them vary somewhat. The most common name for the bird seems to be the Xhosa impundulu, literally meaning “lightning bird.” It’s also called the izulu or inyoni yezulu. The consensus seems to be that they’re birds that cause thunder with their wings and lightning with the talons, perhaps taking the form of the lightning themselves. 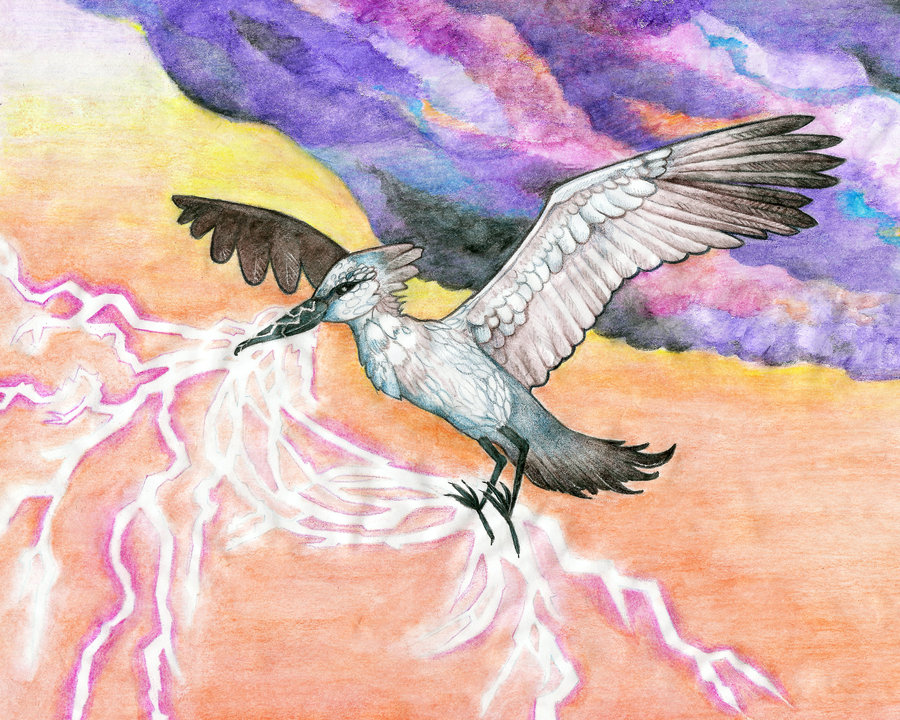 Image source
The place where their lightning first hits is where they lay their eggs. The eggs are thought to cause bad luck, so are typically dug up and destroyed. It’s said, however, that shamans are able to use the eggs in recipes, including ones that can curse a person to be struck by lightning. The fat of the birds is useful in medicine and can be used to track thieves, but the animals can only be caught when their lightning occurs. Otherwise, it’s possible they can’t be killed at all. Some accounts say that only woman can see the lightning birds in their natural forms, but this isn’t entirely consistent. They have been variously described as human-sized and black and white in color, black and similar to roosters, and with iridescent feathers that can change color. It’s also said that the hammerkop, a sort of wading bird, is actually the impundulu. There are legends that harming the nest of the hammerkop, which is unusually large and strong, can bring down lightning.

Several pages mention that the impundulu sucks blood and breath from people, and that they will sometimes purposely strike down humans in order to bring them to their master, the Lord of Storms. Besides the thunderbirds, another similar sort of bird is the rain-making shangyang in Chinese mythology, which stands on one leg and blows out rain.

And in more modern culture, there’s Zapdos, the legendary lightning bird Pokémon, which the Bulbapedia entry suggests might have been inspired at least partially by the impundulu. As such, Articuno might have been modeled on the Simurgh, and Moltres on the firebird and/or phoenix.

1 Response to You Always Lose with Impundulus