I’m not really not that knowledgeable about Pokémon, but I have played Pokémon Yellow and picked up a few other things here and there. These are mostly about the original Pokémon, though, and there have been so many others since then. It’s occasionally come up in my research for mythology posts that particular Pokémon are based on some sort of mythical creature. I’ve long been intrigued by the common and fairly useless Magikarp being able to evolve into the dragon Gyarados, and its origin in Chinese mythology. Legend has it that, if a carp can swim up a certain waterfall and jump over a gate, it will become a dragon. It’s some sort of parable about perseverance.

Just recently, I watched these videos about Pokémon based on some really creepy myths.

I’ve already covered a few of these in the past, like the Futakuchi-Onna, Yuki-Onna, Namazu, Kappa, and Baku. In the latter case, I actually mentioned that it was the inspiration for the Drowzee. The others inspired the Mawile, Froslass, Whiscash, and Lombre, respectively. One I don’t think I’d heard of before is the Sazae-Oni, a sort of snail demoness.

Picture by Mizuki Shigeru
The word sazae refers to the turban snail, a sort of sea snail named for the shape of its shell.

The scientific name of the genus, turbo, sounds ironic for a snail since they’re known for being slow, but I understand it actually comes from the Latin for a spinning top. The top snail, however, is a different but related sort of animal. “Turbo” originally meant something that spins, and I guess it came to mean “fast” because of how turbines spin. “Turban,” on the other hand, is derived from the Persian dulband. When hermit crabs are sold as pets, they often come with turban snail shells.

The Pokémon Slowking might be based more on a hermit crab, although it looks rather mammalian.

Since it’s a king, the Shellder on its head serves as a crown. It’s one of the two evolutions of the otter-like Slowpoke, only accomplished when the animal possesses a King’s Rock. The other, Slowbro, has a Shellder on its tail instead.

The Sazae-Oni is similar to a Slowking in having a turban snail shell on top despite not looking like a snail itself.

Picture by Matthew Meyer
There are two different origins for the demon, one being that a turban snail is able to transform into one upon reaching the age of thirty, which appears might actually be possible in the wild (the living that long, I mean, not the turning human). The other origin story is that they’re lustful women who are thrown into the sea. They’re essentially in the category of water-dwelling women who lure people to their deaths. The most popular story about the creature involves pirates who see a Sazae-Oni and think she’s drowning, so they rescue her, but with the ulterior motive of having sex with her. She’s willing, but she bites off all the men’s testicles. That must have been some really good sex for them not to notice that, or maybe Sazae-Oni have the power to do such things painlessly. They had to use their gold to buy back their balls, which can be called “golden balls” in Japanese, so there’s a bit of a gross pun there. The Sazae-Oni are also known to hang out on land, where they’ll stay at inns and eat the innkeepers. It’s much more effective than filling out a comment card. I’m guessing these Sazae-Oni don’t look like this one drawn by Toriyama Seiken. 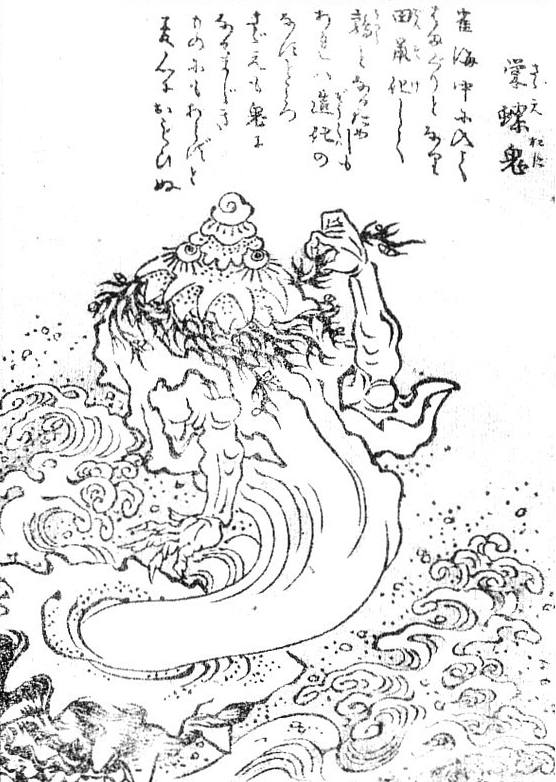 Actually, most of the pictures I’ve been able to find that show Sazae-Oni as something that would be attractive to humans seem to be more recent. I guess there’s no need to look like that when submerged. Leah Palmer Preiss drew a good picture of a more human-looking one.

1 Response to Such Shellfish Women