Beth and I watched two movies this past weekend, one an old children’s film and the other about a violent murder. Look, they don’t all have to be consistent in mood. 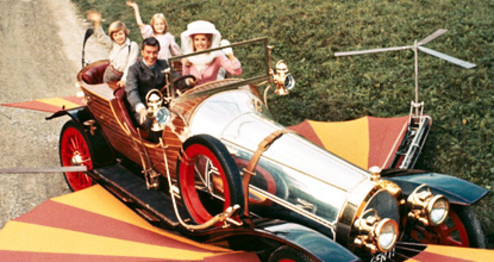 Chitty Chitty Bang Bang – Released in 1968, this movie really seemed to be trying to imitate Mary Poppins from four years earlier. It has Dick Van Dyke in a lead role (again playing an Englishman, although here they purposely didn’t make him attempt the accent), and apparently they wanted to get Julie Andrews as the female lead but couldn’t, so they instead got Sally Ann Howes, who replaced Andrews in My Fair Lady on Broadway. The songs are by the Sherman Brothers, a boy and a girl are central characters, and there are even a lot of similar plot elements and jokes. The film was based on a book by Ian Fleming, the guy who wrote the James Bond books, so obviously he was into cars. It was produced by Albert R. Broccoli (apparently his real name), who produced a lot of the Bond films; and featured some of the same actors. It’s also been suggested that the name of Howes’ character, Truly Scrumptious, is basically a G-rated version of a Bond girl name. This character wasn’t in the book, although a candy company owner named Lord Skrumshus was, and in the movie she’s his daughter. From what I’ve seen, the movie is quite different from the book. Roald Dahl wrote the screenplay, which means there are a fair number of whimsically creepy elements. The candy theme was in the book, but maybe that was part of what drew Dahl to the project.

Van Dyke plays Caractacus Potts, an eccentric inventor who lives with his kids Jeremy and Jemima and his father, the latter of whom spends most of his time imagining he’s traveling to exotic places. Caractacus was married in the book, but here he’s a widower (or at least that’s what descriptions of the film say; I didn’t notice any on-screen mentions of it), so Truly, whom the kids introduce to him, is his love interest. The children want him to buy a car that they found at a junkyard, so he does and fixes it up, naming it Chitty Chitty Bang Bang because of the sounds it makes. On a beach picnic with Truly and the kids, he tells a story with them as characters, making the more fantastic part of the film (which appears to have been totally Dahl’s idea, save a few details) fictional even without the context of the movie. Baron Bomburst, ruler of the German-based nation of Vulgaria, wants to steal the car. His bumbling spies accidentally kidnap Caractacus’ father instead of him, and Chitty, of its own volition, grows wings and flies after him to Vulgaria. Jeremy and Jemima are captured by the Child Catcher, who lures them in with candy. The IMDB mentions that Nazi scientist Josef Mengele actually did that kind of thing. Caractacus and Truly enlist the help of a friendly toymaker played by Benny Hill, who does not chase any women to “Yakety Sax” in this role. He disguises them as a music box and a rag doll, and after they do some elaborate dancing for the Baron, the hidden kids of Vulgaria launch an attack on him. Back in reality, Truly’s father buys a candy Caractacus invented, and Caractacus and Truly fly off in Chitty. So apparently it really can fly, even though it previously only did in the story-within-a-story? Beth pointed out that Grease ended the same way. I have to wonder what I would have thought of this movie if I’d seen it when I was a kid. Like others of the same time period, it’s long, a few minutes longer than Mary Poppins. The songs are pretty good, and there are some technically impressive elements, like the toy dance.

The Witness – This is a documentary about Kitty Genovese, hosted by her brother Bill. Kitty was raped and murdered in Kew Gardens, Queens, in 1964, and the news reported that thirty-eight witnesses did nothing even though she screamed quite audibly. Fifty years later, Bill tried to get to truth of his sister’s murder, interviewing potential witnesses and other relevant people. The film suggests that most of the people identified as eyewitnesses actually only heard, that people really did call the police, and that Kitty died while with a neighbor. It was also reported that Kitty was a barmaid, when she was a bar manager at the time she died. It gave a lot of details about her life and who she was. Bill even tried to talk to the murderer, and while he didn’t consent to an interview, he did write a letter giving a bizarre version of events. The ultimate conclusion was that we can never know for sure what happened, but that the story as generally told wasn’t necessarily entirely true.