Something I’ve looked at before is the nature of puns in the Oz series, and how they can serve different purposes. Some are purposely made by the characters, some are asides, and others are just kind of part of the story. L. Frank Baum was already a punster, but Ruth Plumly Thompson upped the game, and John R. Neill went even farther overboard. I love puns, yet I’ll admit they can sometimes be irritating. My wife, who isn’t keen on them, asked why it seemed like everyone at OzCon groaned at puns when they were fans of books containing a whole bunch of them. Paul Dana said that he LIKES to groan. One thing that’s interesting to note is how, in The Marvelous Land of Oz, Professor Wogglebug makes puns to show off his intelligence, and his companions hate them. But they also make puns themselves sometimes, and no one has any particular reaction to them one way or the other. Emerald City is particularly full of them, not only containing the pun-filled Bunbury and Utensia episodes, but quite a bit from the familiar characters as well. The Wizard of Oz says he gave the Sawhorse brains made of sawdust, which “was made from hard knots, and now the Sawhorse is able to think out any knotty problem he meets with.” When showing his guests around his new home, the Scarecrow says, “The corn I grow is always husky, and I call the ears my regiments, because they have so many kernels. Of course I cannot ride my cobs, but I really don’t care shucks about that. Taken altogether, my farm will stack up with any in the neighborhood.” Interestingly, the chapter where the Wogglebug appears doesn’t have any really notable puns, as he’s too busy gushing about his college instead. 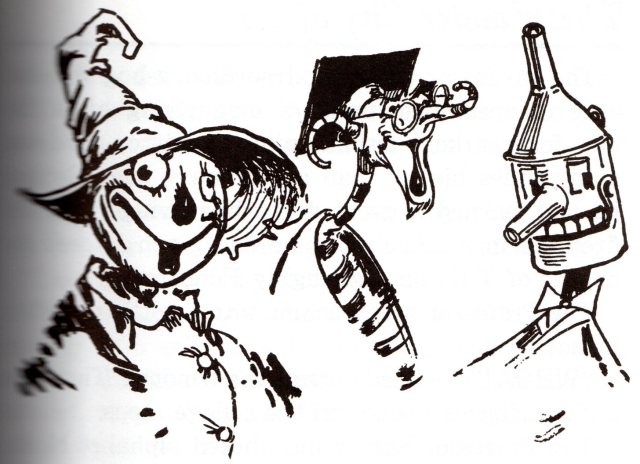 As Wonder City was heavily edited, reportedly without Neill’s knowledge or consent, we can’t be too sure how many of the puns in the book were his. Since many are associated with the ozlection, which wasn’t in Neill’s earlier manuscripts, those particular ones probably weren’t. But his other books are also loaded with puns, and mostly in a way where no one seems to be aware they’re making them. Indeed, the tone of Wonder City is kind of weirdly serious for a book full of more nonsense and puns than most of the series. And it seems that the Wogglebug thrives in this environment. He tells his students to “mind your P’s and Q’s,” and then hands out alphabet blocks. When discussing the ozlection, everyone makes suggestions based on wordplay. After rejecting a few ideas, the insect decides on right shoes as votes because “We want the people to throw their SOLES into the matter, and to use their RIGHTS.” Instead of threatening him for his bad jokes, they instead find the idea acceptable for deciding the leadership of the nation. It’s like, since Neill’s Oz runs on terrible puns, the most notorious punster of them all is a natural leader. That’s not to say that I think Neill and/or his editor were really thinking it through that way, but it’s interesting to me in light of how the character is treated by other authors. It’s one of those bits of probably accidental continuity. Neill also had the generally simple-minded Jack Pumpkinhead building a pipe organ and designing Scraps’s Spoolicle, but that actually kind of fits with how the Scarecrow credits Jack with designing his mansion. And for another one involving the Wogglebug, his sudden interest in genealogy in Thompson’s Royal Book seems totally out of nowhere, but there is a bit in The Woggle-Bug Book where he tells a chimpanzee, “As for breeding…my father, although of ordinary size, was a famous Bug-Wizard in his day, and claimed descent from the original protoplasm which constituted the nucleus of the present planetary satellite upon which we exist.” I don’t think that last part means anything in particular, but if he just means he was descended from single-celled organisms, can’t any terrestrial life claim that? Regardless, it’s an odd connection Thompson probably didn’t intend.