In my ongoing viewing of cartoons based on video games, I knew there was a Donkey Kong Country series, but not that much about it. Made by the Canadian animation company Nelvana, the same one that made the Care Bears series, it aired in Canada and France before coming to the United States in 1998. It’s computer-animated, which at the time was enough of a novelty that it presumably didn’t matter that it wasn’t computer-animated all that well. What’s weird is that, in the second season, the animation was crisper, yet the characters seemed to have less personality. Sometimes you can’t win. It’s a pretty typical cartoon series of the time when I grew up, with pretty much every episode involving the bad guys cooking up a plot, the good guys thwarting it, and everything being back to normal the next time. A lot of the episode plots had familiar themes as well: someone de-aging into a baby, a treasure hunt, a bad guy temporarily joining the good ones, amnesia, an almost-wedding, an election, brain switching, etc. Some of the voice actors had worked on other video game cartoons: Andrew Sabiston as Yoshi, Len Carlson as Ganon, and John Stocker as Toad. Ian James Corlett, who had voiced Dr. Wily on Captain N and Mega Man in his own series, wrote a few episodes. Each episode includes one or two songs, which are…actually pretty good, at least musically. Donkey Kong has a good singing voice, but not so much with some of the other characters. I wouldn’t say I particularly recommend the series, but it did grow on me a bit over the course of watching it.

The back story for the series has it that Donkey Kong found the magical Crystal Coconut in the ancient Temple of Inka Dinka Doo, and it predicted he’d be the future ruler of Kongo Bongo Island (Donkey Kong Island in the games), where he and his clan live. King K. Rool and his Kremlings are constantly trying to steal the Coconut, but DK (you know, those are Diddy and Dixie’s initials too, but only Donkey ever seems to be called that, perhaps partially because just calling him “Donkey” sounds a little weird) thwarts every attempt, generally through brute strength. It’s not entirely clear how the Coconut works, as sometimes it grants any wish made in its vicinity, but usually only when they’re unintentional. If it really has that kind of power, why don’t the Kongs just wish the Kremlings off the island? Other times it answers questions. K. Rool steals it a bunch of times and never does anything with it. All of the Kongs from the first DKC game appear regularly, and Dixie is semi-regular, but there’s no sign of Wrinkly or Swanky.

Cranky keeps the Crystal Coconut and works magic, his potion mixing eventually making it into the games with Donkey Kong 64. There’s no indication of his relation to DK, probably the right move considering that the games are contradictory about it. Funky has a Jamaican accent and mystical beliefs. In one episode, he saw trees while accidentally flying his plane upside down, and said something like, “I’ve never seen green clouds before. Well, once.” Is there any way that ISN’T a marijuana reference? Candy is DK’s girlfriend who, like other famous cartoon girlfriends, is constantly mad at her beau, sometimes with good reason and other times because she just assumes the worst. She also has short, much less feminine-looking hair for some reason. 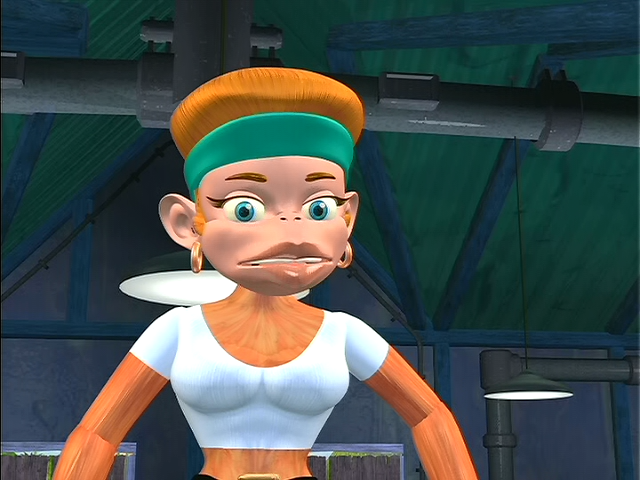 Not only is DK not that bright, but he’s really terrible at explaining what’s going on even when he DOES have a valid excuse. And since this is a cartoon, everyone tends to fall for every trick, no matter how stupid or obvious, which often leads to DK getting in trouble for things he didn’t even do. Candy works at a barrel factory run by an original character, Bluster Kong, the self-proclaimed richest ape on Kongo Bongo, who’s obnoxious, cowardly, and always hitting on Candy. His unseen mother actually owns the factory, which suggests SHE’S the richest ape, but maybe she doesn’t live on the island. I’m not sure why Candy needs to work when other Kongs get along all right without it. I guess Cranky must be paying DK’s expenses in exchange for his guarding the Coconut, or…something. There was an early episode that suggested bananas were currency, which doesn’t make sense both because they don’t last and because they grow freely on the island. The only other Kongs who showed up were Baby Kong, DK’s nephew who looks exactly like DK himself did when he magically turned into a baby; and Kong Fu, who teams up with K. Rool to challenge DK. And Eddie the Mean Old Yeti, who’s grouchy, speaks in broken English, and lives by himself in the snowy White Mountains, shows up from time to time as well; and he looks like he could be related to the Kongs, even though his fur is white.

As for the bad guys, K. Rool is the really hammy sort of villain who’s not uncommon in cartoons. And for some reason, except for a few instances in the pilot (the pilot EPISODE, that is, not Funky), everyone pronounces his name “Ka Rool” instead of “Kay Rool.” Maybe the K stands for Ka, but that would be kind of stupid. He doesn’t have the permanently bloodshot eye he does in the games, but one of his eyes does enlarge when he gets angry.

His second-in-command, Klump, has a Southern accent and a military lingo and fancies himself a master strategist, but isn’t really that bright. Still, he’s smarter than Krusha, a dumb muscle character with a childish personality. K. Rool also has a whole army of Kritters and wood-eating Klaptraps who double as ammunition, but a lot of the time it’s just the big three enacting the plans to steal the Coconut. 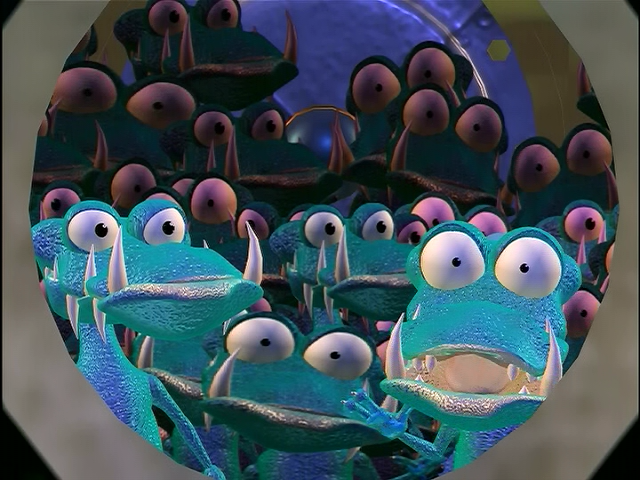 There’s also a band of pirates led by Kaptain Skurvy, who are also trying to take the Coconut. They’re new characters, but presumably based on the pirate theme of DKC2. 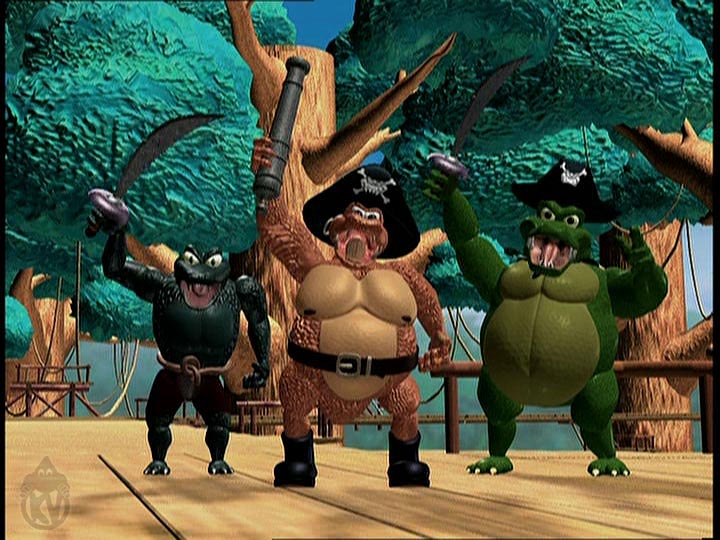 In the second season, it’s revealed that Skurvy is Klump’s older brother, who took the fall for Klump when he accidentally burned down their old swamp home, which is why Skurvy became an outlaw. Piracy must have been in the family anyway, however, as the reason Skurvy feels entitled to the Coconut is that a pirate ancestor of his hid it on Kongo Bongo in the first place (or at least that’s what he claims). So who’s lacking from the games? The animal friends! Come on, if you asked me for ideas for a DKC cartoon, the first thing I’d try to do would be to figure out how to get Rambi into it. About the closest they get is that there’s a parrot character named Polly Roger, who works for both Skurvy and K. Rool, but will willingly stab someone in the back for a cracker. None of the non-reptilian mini-bosses show up either. An element of the games that we do see pretty often is the minecarts, which are the primary mode of transportation in the Kremlings’ underground lair. It’s interesting how, when a TV series based on a game series is made early in the latter’s run, it tends to introduce a lot of its own lore to make the plots work, and it often tends to be contradicted or just ignored by later games. I guess that’s common among different adaptations of the same property. That said, Crystal Coconuts do show up as items in DK games, although there are a bunch of them instead of a single super-powerful one.