This post on the Merry Old Land of Oz Facebook group got me thinking about how most of the kids who visit Oz tend to be only children. Okay, to be fair, it’s possible they have siblings we don’t know about, but it doesn’t seem that likely. We could definitely interpret Dorothy, Betsy Bobbin, and Trot as essentially being unofficial sisters.

The only kids in the Famous Forty specifically said to have siblings are Twink and Tom in The Shaggy Man of Oz, and they’re twins.

In Alexander Volkov’s Magic Land books, Ellie Smith, the equivalent of Dorothy, has a younger sister named Annie who visits Magic Land after Ellie becomes too old. I’m not sure why she’s too old for magical adventures while her uncle and cousin aren’t, but that’s what happens. Ellie and Annie also live with their parents, and are not orphans like Dorothy. Robin Hess’s Christmas does give Button-Bright a younger brother named Walt who stays in Philadelphia, although I’m not sure whether that can be reconciled with Paul Dana’s account of Button-Bright’s family in Lost Boy.

What’s also interesting is that the adults who visit Oz from the United States mostly are said to have siblings. Aunt Em’s sister is married to Bill Hugson; and while it’s never specifically stated, it’s implied that Uncle Henry is the brother of one of Dorothy’s parents. The books never identify Henry and Em’s last name, but the movie calls them Gale, and many fan works have followed suit. The Shaggy Man searches for his brother in Tik-Tok, and eventually brings him to Oz to live.

Cap’n Bill’s brother Joe, formerly from the ship Gladsome, features in The Sea Fairies, where he turns up living in Zog‘s undersea palace despite Bill thinking he’s drowned.

Cap’n Bob from Frank Joslyn Baum’s Laughing Dragon has also been said to be a brother of Bill and Joe’s, even though I’m pretty sure this wasn’t in the original version, in which he was really just more of a rip-off of Bill.

And Notta Bit More is the youngest of twelve. The only exception is the Wizard, and even then we just don’t know one way or the other.

It seems that Ozian natives often aren’t said to have siblings either, perhaps not too surprising in a place where people hardly ever die. I’m mostly counting human protagonists here, as animals are often born in litters, but there isn’t much mention of this in the books. We do know that the Nine Tiny Piglets are all siblings, as are Pinny and Gig in Hidden Valley. And artificially animated beings often seem to define their own family relationships. Jack Pumpkinhead considers Ozma his parent, but there’s no indication that the Scarecrow has that sort of relationship with the farmer who made him, or the Patchwork Girl with Dr. Pipt or Margolotte. The Tin Woodman, who of course was flesh and blood at one time, claims to have six nieces in Lucky Bucky, which presumably means he has at least one brother or sister. There’s also a brief reference in the 1926 Ozmapolitan to a Utensian skillet being his nephew, but it’s not entirely clear how that relationship works. Obviously Number Nine‘s family of fourteen is an exception to the general rule.

Polychrome has many sisters, and Queen Ann Soforth in Tik-Tok has a younger sister named Salye.

The Three Adepts in Glinda are likely to be sisters, but it’s never actually stated.

And Tim in Dick Martin’s Ozmapolitan is the youngest of seven.

Other books by unofficial authors have given siblings to characters who weren’t previously said to have them, including Glinda’s sisters in Greg Hunter’s Enchanted Gnome and Allison McBain’s Cory, Kabumpo‘s sister Kabina in Jeff Freedman’s Magic Dishpan, Pastoria‘s half-brother Riskitt in Donald Abbott’s How the Wizard Saved Oz, Ruggedo’s brothers Fumaro and Acinad, and Prince Philador’s newborn brother in “Mysterious Pool” (although he isn’t born until some time after the events of Giant Horse). I believe I’ve read a few books that identified the Soldier with Green Whiskers and Guardian of the Gates as brothers, Atticus Gannaway’s Time Travelling being the one I recall offhand. 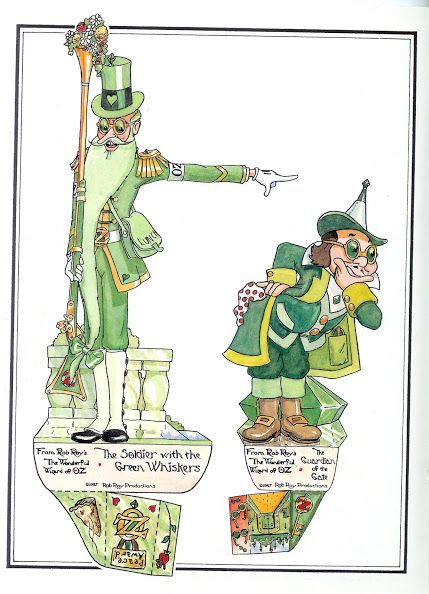 And Jellia Jamb coming from a large family is something I recall from at least one short story, and I went with that idea in “The Other Searches for the Lost Princess of Oz.” And I’ve written about how the Wicked Witches of the East and West are generally considered siblings, something that was first established in the MGM movie, but made it into a lot of fan-written works based on the books. Mombi also has siblings, according to Paul Dana’s works. I’ve done a bit of family-building myself, as with Handy Mandy in my Goat Girls.