What Makes a Fairy?

Happy birthday to Ozma, Fairy Ruler of the Land of Oz! I’ve looked before at how Ozma was basically retconned into being a fairy, but what exactly does that mean? A fairy, in L. Frank Baum’s mythology, can be basically any kind of immortal. They cannot die, and have some level of magic power. The Life and Adventures of Santa Claus presents them as the guardians of mankind, and they don’t appear to have very many limits in where and how they can travel. Santa Claus is able to use “mystic words” to summon them to him when he’s trapped in a cave by the Awgwas, and they transport him back home. The Fairy Wisk, who becomes one of Santa’s helpers, tells him that “walls of brick and wood and plaster are nothing to Fairies.” They are also said in this book and Queen Zixi of Ix to have wings. 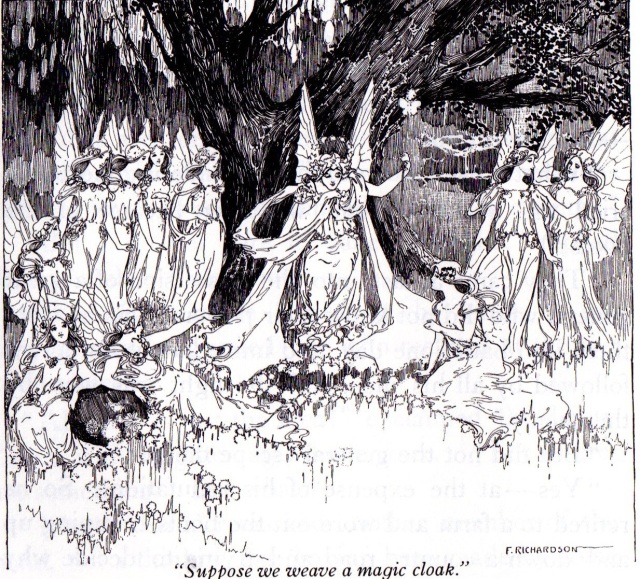 The fairy protagonist in The Enchanted Island of Yew informs some children that fairies cannot change their own forms, but mortals can transform them. This doesn’t seem to be entirely consistent, however, as Ereol in Zixi takes the form of a young man when she gives the Magic Cloak to Fluff. It’s possible that the disguise is more of an illusion than a true transformation, but I’m not sure that wouldn’t also apply to the fairy who become Prince Marvel, as she still has access to her fairy powers. Would it be possible for her to die in the form of a mortal boy? For that matter, what even is the physical composition of fairies? In many cases, they seem to be quite similar to humans in most respects, except much more durable. There are a few instances in the Ruth Plumly Thompson books that suggest Ozma has stamina and resistance to pain beyond that of humans.

Still, at least under normal circumstances, she can’t fly, walk through walls, teleport, or perform many of the tricks Prince Marvel does. She does learn magic eventually, however, and can do some things through spells that she can’t do automatically. Even Polychrome, a much more ethereal being, is limited by her physical form, and lacks the freedom of movement that the Life and Adventures Fairies seem to have. And she needs to eat and sleep, but has more energy and needs to eat a lot less than mortals. Coming from a warmer area, she’s also susceptible to cold. In Tik-Tok, she’s able to keep out of the Nome King and Guph’s clutches.

And in Tin Woodman, she does magic, but explains that its effectiveness “all depends on the good will of my unseen fairy guardians.” So a fairy has her own fairy guardians? How far does this go? And Nomes, who are also fairies, can suffer bodily destruction, and apparently can be killed by eggs, although exactly how isn’t consistent from one book to another. There might be some kind of hierarchy for fairies, or maybe just different specialties. I wonder if the Wizard’s statement in Lost Princess that they can’t be made invisible against their will holds for all of them.

1 Response to What Makes a Fairy?