I haven’t written a dedicated mythology post in a while, and I recently finished the second Aru Shah book, so I thought I might do something with one of its characters. One of the main villains in the story was Surpanakha, who plays a significant role in the Ramayana. She’s the daughter of the sage Vishrava and the Rakshasa Kaikesi, and the sister of the ten-headed Ravana. Their other siblings were Vibhishana and Kumbhakarna, who also played roles in the epic. Surpanakha’s birth name was Meenakshi, which means “fish-eyed,” which is a good thing in this context. It’s one of the names of Parvati, and I once had a boss with that name. 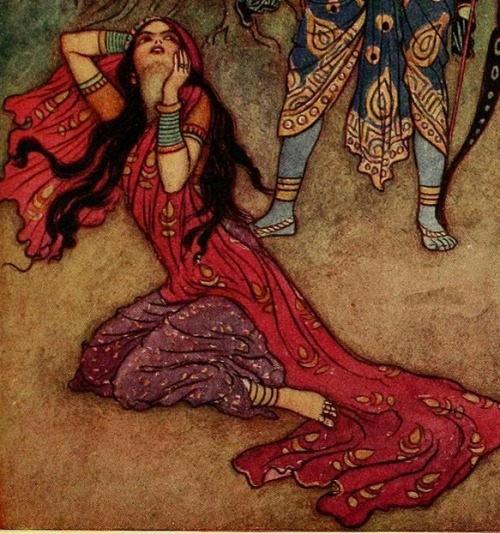 Anyway, she was a beautiful woman, but later came to be regarded as ugly. The name she came to be called by means “fingernails like winnowing fans,” and she’s also said to have been cross-eyed and pot-bellied, with thin coppery hair, a grating voice, and oversized breasts, which were apparently bad in this context. Surpanakha married the Danava Prince Vidyutjihva, which enraged Ravana, as the Danavas (a subset of the Asuras) were enemies of the Rakshasas. (They also went to war with the Devas. Apparently Danavas didn’t get along with much of anybody.) Ravana tried to visit the newlyweds and make peace with them, but Vidyutjihva tried to kill him, and Ravana killed him first in self-defense. At least that’s the way HE tells it, I suppose. It sounds like Surpanakha never forgave him. She came across Rama and, changing into a more attractive form with her Rakshasa power, offered to marry him. He refused, as he was already married to Sita, which meant she was denied a rendezvous with Rama. She then offered himself to his brother Laxmana, who mocked her for it. Enraged, she attacked Sita, who hadn’t done anything to her. Laxmana responded by cutting off her ears, nose, and breasts. 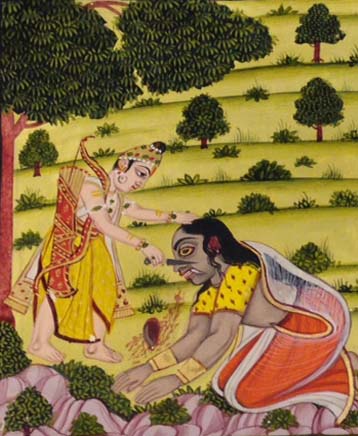 Does everyone in this story violently overreact? Okay, maybe Sita doesn’t. Surpanakha then convinced her brother to kidnap Sita, talking up her beauty. It’s been suggested that she was playing both sides here, as she was pissed at both Rama and Ravana.

Vibhishana wasn’t too happy about his brother being a kidnapper, so, on his mother’s advice, he sided with Rama. 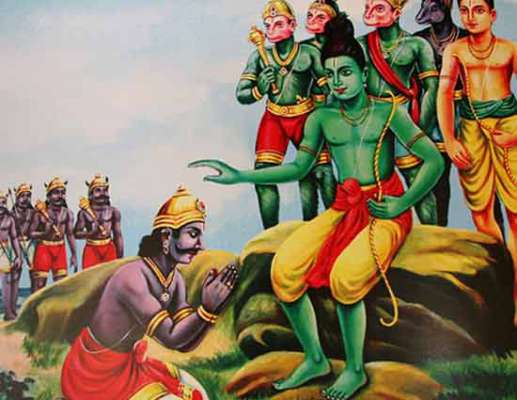 The other brother, Kumbhakarna, was a giant and such a great warrior that the god Indra felt threatened by him. When he requested a boon from Brahma, the goddess Saraswati tied his tongue so that, instead of getting what he wanted, he was instead made to sleep for periods of six months at a time, only waking up for a day after that. He spent that day trying to satisfy his voracious appetite, even eating people.

When Ravana sought his help, he had to send a thousand elephants to trample on Kumbhakarna before he woke up.

He didn’t approve of his brother’s actions either, but he helped him out anyway because of loyalty, decimating much of Rama’s army before being killed by the hero. Vibhishana took over as King of Lanka after Ravana’s death, and is said to have led his people toward righteousness. As for Surpanakha, it’s believed that she remained in Lanka, eventually dying at sea. In Aru Shah and the Song of Death, Surpanakha bemoans that her back story has been forgotten and she’s remembered only as the catalyst for the war between Rama and Ravana, and the loss of the story has made her ugly. When doing research for this post, I noticed it’s not the only recent attempt to tell Surpanakha’s side of the story.