Cabin Boy – Chris Elliott is known for playing dumb, hapless, obnoxious characters, and this is no exception. Beth used to watch Get a Life back in the day, and we’d been watching the DVDs, but never finished with them for some reason. The movie seems to be a pretty direct parody of Captains Courageous, a Rudyard Kipling novel made into a film. I have neither read the book nor seen the movie, but its general idea of a spoiled kid coming of age on a sea voyage has become a trope. Elliott’s character is a rich, condescending young man who, after graduation, plans to take a cruise to Hawaii. In his general stupidity, he accidentally gets on the wrong boat, a fishing schooner called the Filthy Whore. When he tries to convince the cabin boy, played by Andy Richter, to steer the ship to Hawaii, he accidentally brings it into a Bermuda Triangle sort of area called Hell’s Bucket, and then blows overboard. Elliott is obnoxious to everybody, so the fishermen make him do all their dirty jobs and plan to maroon him on the only island in Hell’s Bucket. Elliott also does what he thinks is saving a woman, but it turns out that she’s actually trying to swim around the world, and she’s pissed. The crew forces him to dance to the Alley Cat (a recurring motif in Elliott’s work) while they throw things at him, the sort of thing where Elliott kind of deserves it for being such a jerk, but you can’t help but feel a little bad for him because of how naive he is. That came up a lot in Get a Life as well. The movie gets more surreal when the crew encounters a half-shark man, a woman who resembles the goddess Kali, and a giant who runs a housewares store. Elliott slays the giant and wins the love of the swimming woman, and and while they do eventually reach Hawaii, he decides to stay on as part of the crew. I can’t say I was particularly keen on the movie, but it had some good jokes throughout, often working because of the idiotically philosophical style of Elliott’s dialogue.

Brighton Beach Memoirs – The Eugene trilogy was a series of plays by Neil Simon. The first two were made into theatrical films, but the third, Broadway Bound, was only a direct-to-television movie. We watched these first two, but we’re not sure how to see the third. Anyway, this was about a character named Eugene Jerome, loosely based on Simon himself, growing up with his Jewish family in Brighton Beach, Brooklyn in 1937. It’s a slice of life sort of thing, dealing with a situation where Eugene’s father loses a job, his older brother comes close to losing his, and there’s tension between his mother and his widowed aunt who lives with them. There are some rather uncomfortable bits, however, like how Eugene has a crush on his cousin, and his older brother admits he’s purposely seen her naked before. Beth also pointed out how the mother was opposed to her sister dating an Irish guy because she just assumed he was an alcoholic, and then it turns out he’s not able to keep their date because he got into an accident while driving drunk. So offensive stereotypes about the Irish are correct after all? Overall, though, it was enjoyable, an interesting period piece. 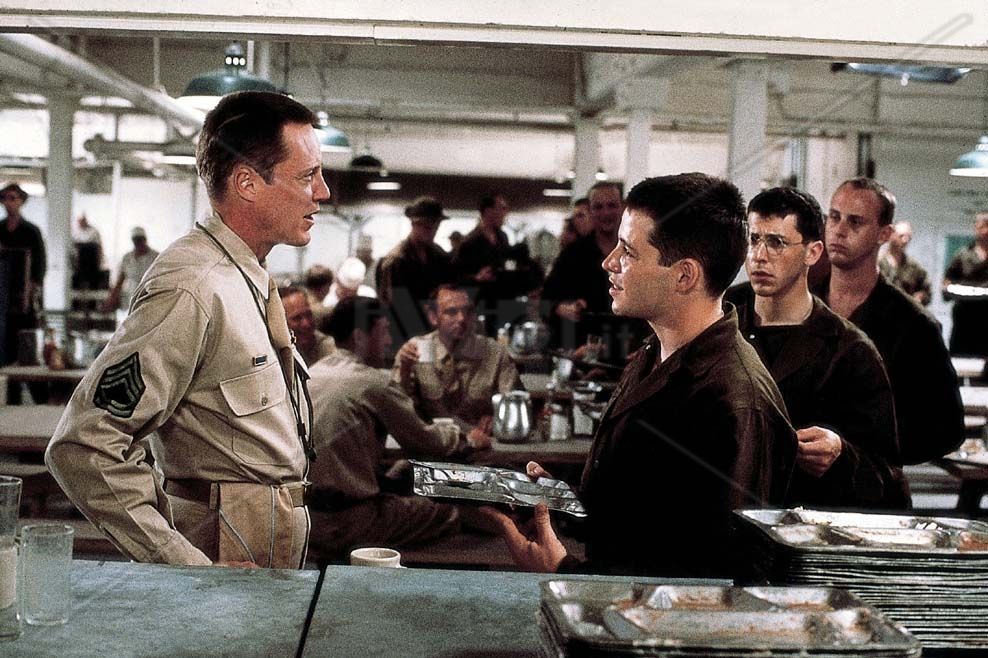 Biloxi Blues – The second part of the Eugene trilogy was one Beth and I had sort of seen before, as her cousin was in a play version of it years ago. He played the crazy drill sergeant, who was Christopher Walken in the film. Matthew Broderick, who had played Eugene on Broadway, also took the role in the movie, which is about the character’s undergoing basic training for the Army in Mississippi. I have to say it doesn’t make me any less terrified of the military. There’s humor, but it’s often a bit dark and uncomfortable. And the awkward sexual content continues a bit, as there’s a scene where Eugene loses his virginity to a prostitute. The sergeant is a jerk to everybody, but particularly nasty to Eugene and the principled, intellectual, but physically weak and very outspoken Arnold Epstein, considering them both troublemakers. Even the Army seems to realize how crazy Sergeant Toomey is, as he’s eventually forced into early retirement, leading to a scene where he gets really drunk and forces Eugene to follow proper procedure in disarming and arresting him. I have to say I preferred Jonathan Silverman over Broderick as Eugene, but what’s kind of weird is that, in the made-for-TV Broadway Bound, Silverman plays Eugene’s older brother, while Eugene is Corey Parker, who played Epstein.

1 Response to Shipping Out