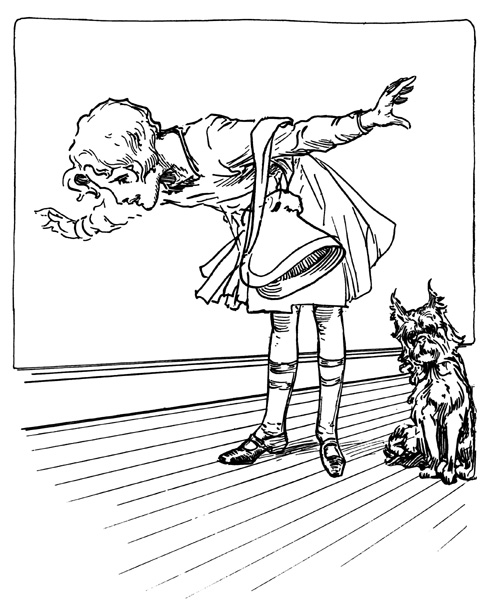 Animal companions are a recurring theme in the Oz books, starting with Dorothy’s dog Toto. Kids reading the books were likely used to pets, so it makes sense. Since animals talk in Oz, however, some animal characters are more equal partners to the humans than pets or beasts of burden, although Oz seems to have those as well. Toto is dependent on Dorothy, while the Cowardly Lion is self-sufficient.

Even when Toto is later revealed to be able to talk while in Oz (he just didn’t want to) and rather intelligent, he still clings to Dorothy. In the original stage play of The Wizard of Oz, Toto is replaced with a cow named Imogene, so the animal could be played by a human actor.

A farm girl having a pet cow isn’t that unusual, I suppose, but it’s a very different dynamic. The earliest known film version of Wizard includes both Toto and Imogene, the former made human-size by Glinda’s magic. On Dorothy’s second visit in Ozma of Oz, she’s accompanied by a hen who was a pet when she was young, but has grown into the sort who takes charge rather than depending on humans.

Eureka and the Nine Tiny Piglets in Dorothy and the Wizard are more reliant on their human companions, and one of the Piglets becomes Ozma’s personal pet.

Other animals who come to fairyland with humans are Jim the Cab-Horse with Zeb Hugson, Hank the Mule with Betsy Bobbin, and Percy, Pinny, and Gig with Jam. And even the wild talking animals sometimes form bonds with people, like the Lion with Dorothy. I found a little odd at the end of Tik-Tok when the animals in the Royal Stables are arguing over which girl is better, and the Hungry Tiger chooses Dorothy even though he met Ozma first. Well, unless the Tiger is the same one who appeared in the Quadling Forest in Wizard, but even so he didn’t seem to have much interaction with Dorothy in particular. Ruth Plumly Thompson had a lot of animals who doted on particular people: the Comfortable Camel with Sir Hokus of Pokes, Nickadoodle with Notta Bit More, Snif the Iffin and Pigasus with Peter Brown, Terrybubble with Speedy, Chalk with King Skamperoo, Yankee with Tompy Terry, and Humpty Bumpty with David Perry. Other animals in her oeuvre are more of the grumpy and argumentative sort, but even they tend to be fiercely protective of the humans they love.

Most of these animals are fully capable of taking care of themselves and don’t necessarily need humans, but they form bonds with them anyway. Many of the more famous and civilized animals live in Ozma’s palace or the Royal Stables just outside. But plenty of Ozian animals live in the wild and fend for themselves, rarely if ever seeing humans. Some of them, like the Wogglebug and the Frogman, live and dress like people. Others belong to the courts of smaller Ozian kingdoms with human rulers, like Kabumpo in Pumperdink, Grumpy in Patch (although he later left with Scraps for the Emerald City), High Boy in Up Town, Snufferbux in Seebania, and Nox in Keretaria.

And there are communities like Bunnybury and Catty Corners where animals live with others of their own kind and apart from humanity, but with some trappings of civilization. Catty Corners is a wilder place than the fancy, prosperous Bunnybury, but at least some of the cats there wear clothes and use salt shakers.