You Should Have Put a Ring on It

The Wizard of Oz has been said to be the ultimate chick flick, as it’s about two women fighting over shoes. But then, J.R.R. Tolkien’s legendarium is one where a lot of world conflicts arise from jewelry, so maybe that’s just fantasy in general. The Lord of the Rings is called that for a reason, after all; and The Silmarillion is also named after jewelry. I’m not even sure the Silmarils DO anything, yet they still cause a lot of bloodshed.

Picture by Ted Nasmith
Okay, I guess shining with a light brighter than the Sun isn’t nothing, but everyone seems to want them mostly as ornamentation. The One Ring, when first introduced in The Hobbit, is a more practical item, being able to turn its wearer invisible. Then, in the sequel, it turns out that it was made by the Dark Lord and corrupts its bearer. Can’t a hobbit have a useful thing without its turning out to be cursed? I guess I have a general preference for magic being essentially neutral in and of itself. But anyway, there are a whole bunch of magic rings in Middle-Earth, most of which don’t appear in The Lord of the Rings itself, but are attested to in a poem. 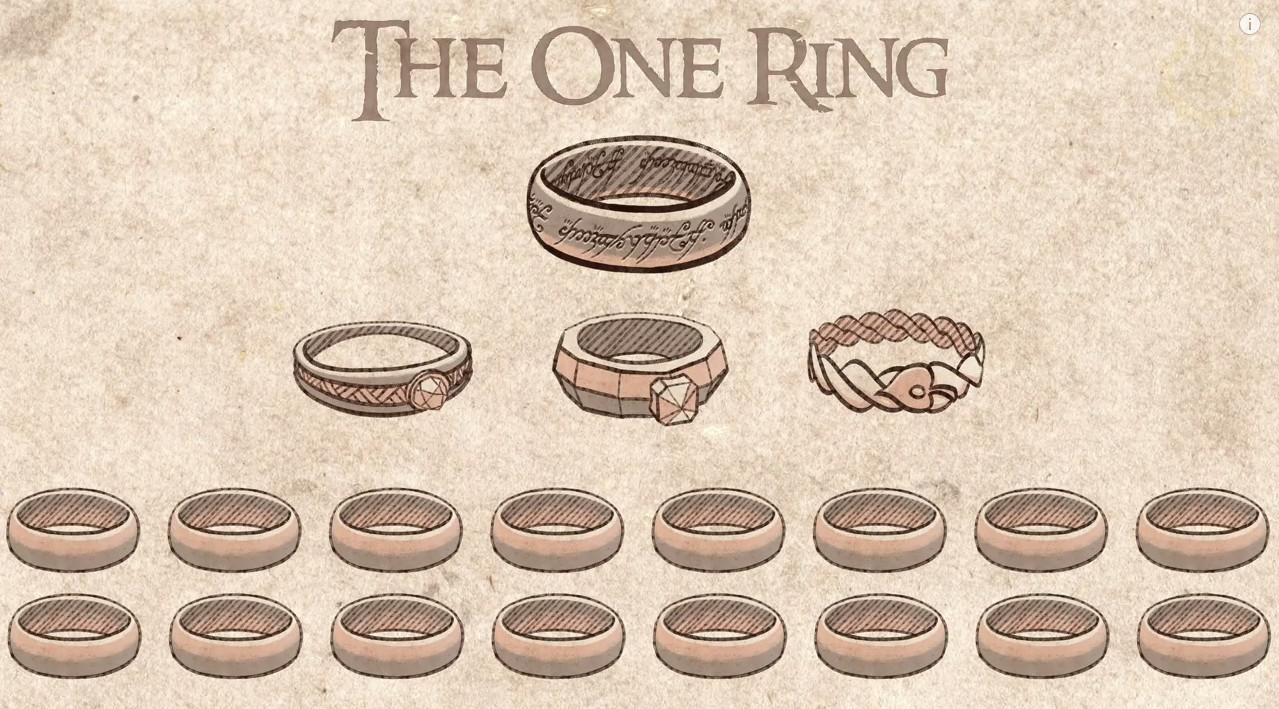 Sauron showed up in disguise and convinced the Elves to make a lot of Rings of Power, then he made his One Ring to rule them all and find them. 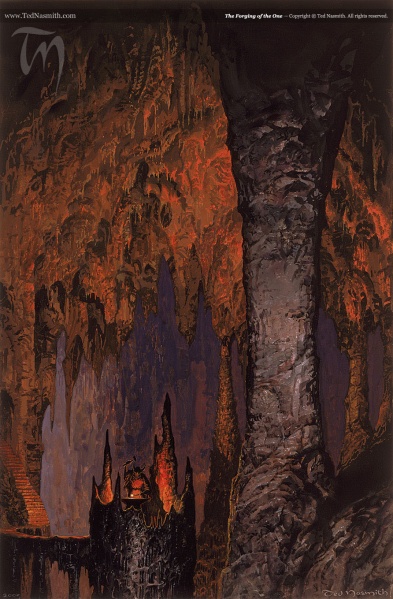 It didn’t quite work that way, though, as he never was able to control the three most powerful ones owned by the Elves, and he was never able to fully corrupt the Dwarves even after giving them seven rings, although they did increase the Dwarves’ greed. The Dark Lord put a lot of his own power into the Ruling Ring, which meant that he lost quite a bit of it when Isildur took the Ring, although it did try to get back to him. So we have a magic ring that increases power, turns its wearer invisible, and is cursed. As such, it bears a clear similarity to the Ring of the Nibelungs in Wagner’s Ring Cycle, although Tolkien wasn’t a fan of this work. It also brings misfortune to its owner, and it supposedly makes them ruler of the world. 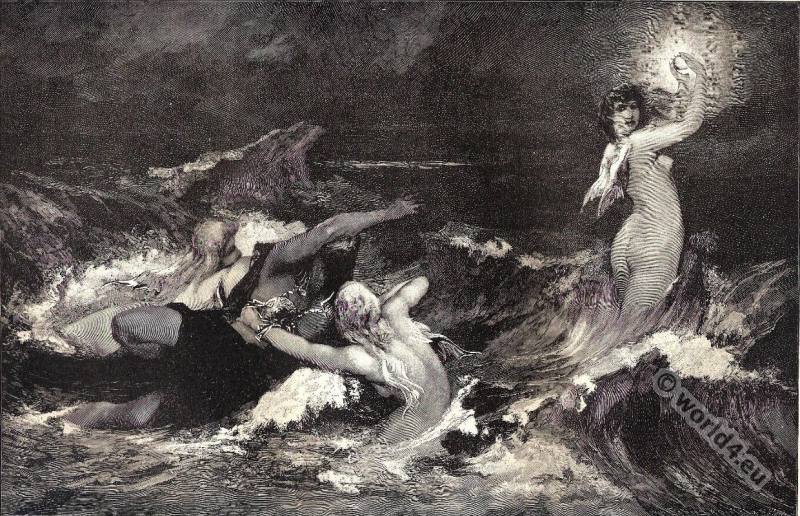 No invisibility, although that is one of the Tarnhelm’s powers. It’s possible that Tolkien and Wagner were just both working with similar sources, in this case primarily Norse mythology. Alberich’s ring in Wagner is based on Andvari’s, which was cursed by its maker when Loki stole it. Fafnir kills his father to take it, much as Smeagol killed his brother for the One Ring. And it can be used to find more gold, which links it to the rings held by Tolkien’s Dwarves that help their owners become richer. The idea of a ring bringing more wealth is also seen with Draupnir, a gift from the Dwarves to the Aesir, which produces eight copies of itself on every ninth night. I suppose the copies don’t also make their own copies, although I’m not sure if it’s specified.

There are lists of other famous magic rings on Wikipedia and TV Tropes. The powers they have are pretty diverse, but protection and control are two themes that come up frequently. Plato’s Republic includes a story of Gyges of Lydia (who might also be the inspiration for the Biblical Gog)finding a ring that grants invisibility if worn a certain way, and he uses it to kill the king and seduce his widow, thereby becoming ruler. Plato’s older brother Glaucon uses the story to argue to Socrates that people are only prevented from doing terrible things because they might be found out. The story of Gyges killing King Candaules and marrying his widow is an older one found in Herodotus, but the ring might have been original with Plato (or Glaucon; I guess it’s not entirely clear whether the real people Plato used as characters actually made those arguments or not). This might be the first example of a ring making its wearer invisible, although there were other artifacts that achieved that in earlier myths, like Hades‘ helmet. Rings in some medieval legends grant other sorts of protection, like an inability to be killed or to shed blood. The first Legend of Zelda game has Link obtain rings that increase his defensive power and also change the color of his clothes (and, due to limitations in the original color pallet, Zelda’s as well), but I believe later games usually just have him actually obtaining different clothes. 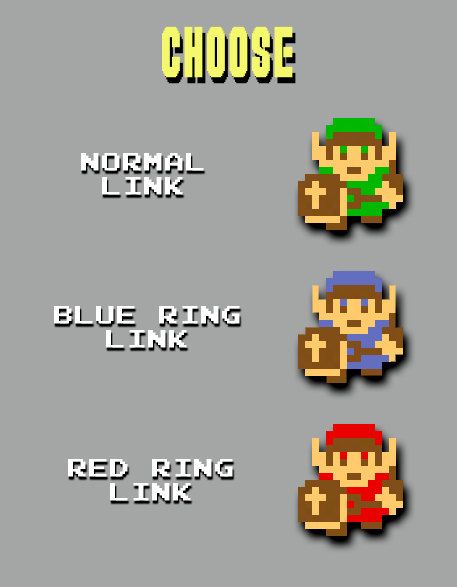 King Solomon is said to have had a ring that could summon and control demons.

The earliest known version of the Aladdin story has him summon jinn from both a lamp and a ring. The wishing ring has also become somewhat of a fantasy cliché, although I’m not sure there are all that many tales that use them. One does show up in “The King of the Golden Mountain,” a story in the Grimms’ collection. A merchant’s son marries a princess and becomes a king, but he misses his family, so she provides a ring that he can use to wish himself back home. He promises not to use it to bring her there, but he breaks that promise, and she takes it back. There are also at least two different twentieth-century songs about wishing rings.


There are a few magic rings in the Oz books, but I think I’ll save those for a future post. So for now, let’s ring out the old.

1 Response to You Should Have Put a Ring on It