A lot of jewelry appears in the Oz books, but I can only think of a few magic rings. I believe the first one mentioned in the expanded Oz universe, albeit not in an official Oz book, is the one Queen Aquareine of the Mermaids gives Trot, a plain gold band set with a pearl, which she can use to call the Queen for help if she’s on the seashore. L. Frank Baum remembers she has this ring in Sky Island and The Lost Princess of Oz, although she’s not in a situation where she can use it either of these cases. She does get to use it in David Hulan’s The Glass Cat of Oz and Christopher Buckley’s Beach Blanket BabylOz. In Sky Island, the Witch Rosalie gives Trot a different ring, which turns her invisible unless she touches someone, and she uses this power to trap the Boolooroo and force him to surrender.

As far as I know, this ring of invisibility doesn’t bend the wearer to the will of a Dark Lord, but it’s not like she wears it for all that long. In Glinda, the Sorceress gives Dorothy a ring that she can use to ring Glinda’s alarm bell if she needs help. In Ruth Plumly Thompson’s Cowardly Lion, King Mustafa of Mudge wears a ring with the powers of blue magic. It changes color from blue to black when a messenger disobeys him, after which he can take off the ring and make the disobedient person immobile, as well as blue in color.

Ozma ends up confiscating this ring from Mustafa. It makes me think of mood rings, but those didn’t exist until 1975. Perhaps the idea comes from the rings in the Scottish ballad Hind Horn, which has a diamond ring that turns pale when the wearer is losing the love of the princess who gave it to him; or to a similar idea in some other work. 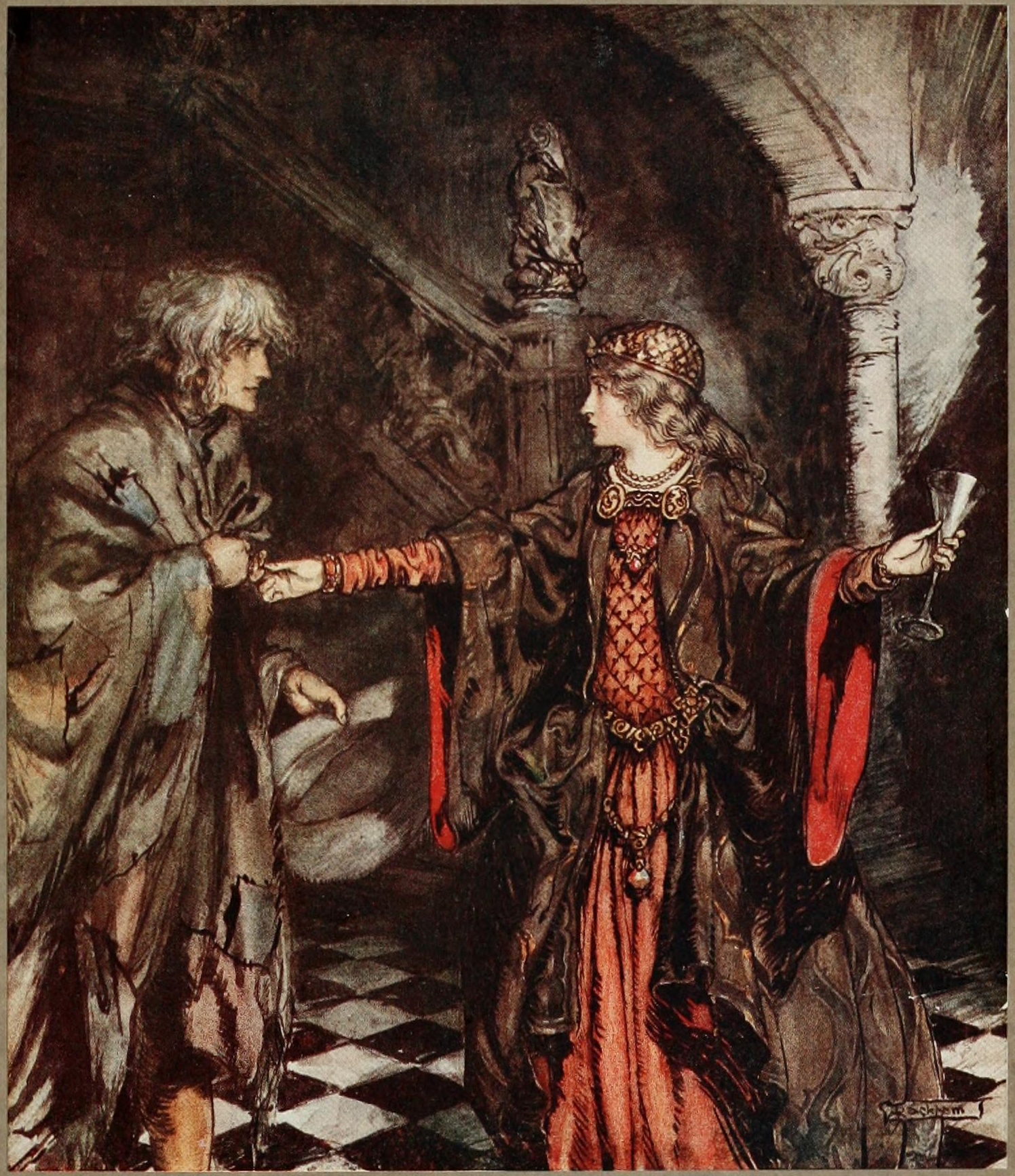 Two of the Rash Rubies in Hungry Tiger are made into rings, but it’s the stones themselves that contain magic.

There’s a bit in Gnome King where Peter Brown, disappointed with the contents of Soob the Sorcerer‘s casket, is said to have “hoped to find something exciting, like a wishing ring.” As many wishing items as appear in the series, however, I don’t think there are any wishing rings. There is one in the stage play of the The Wizard of Oz, which the Good Witch of the North gives to Dorothy, and she’s careless with the three wishes it grants her. One of the wishes brings the Scarecrow to life, however, so it’s not totally useless. Two magic rings appear in Ojo, gifts to Realbad from an old fairy, which protect the wearer from harm. They also ring when danger approaches (the second pun on the two meanings of “ring” in the books, I suppose, after the one in Glinda), but only when they’re separated. Realbad gives one of them to Ojo upon meeting him, but I believe it was John Bell who raised the question of why he didn’t give one to his wife. John R. Neill’s Scalawagons shows Ozma wearing an emerald ring that appears to have various magical powers. And Eloise Jarvis and Lauren Lynn McGraw’s Merry Go Round has the three Circlets of Halidom, although only one of three is a FINGER ring; the others were worn around the base of the king’s crown and on his upper arm.

The Circlets, given to the first King Herald by Lurline, grant intelligence, physical strength, and skill in handicrafts to all of his subjects. That is, until they’re lost, although they’re back by the end of that book. In the meantime, though, the people of Halidom had apparently become so dependent on them that they were basically helpless. Circlet Three, the finger ring, somehow ended up on a carousel in Oregon, and there’s no explanation as to how that happened.

I’m sure I can’t presently recall every magic ring in Oz books outside the main series, but I suppose I should mention Jeremy Steadman’s Emerald Ring, in which the titular item plays a significant role. It grants wishes, even ones simply thought by its wearer, but it has an annoying habit of sending people through time when it isn’t strictly necessary. Lurline uses it to enchant Oz, then gives it to the king, who throws it in the ocean. It turns up in the body of a fish that Arthur Spyeking is eating on board the Seasik. Jared Davis had an idea for a story about a ruby ring that neutralizes magic. The sorcerer Zim Greenleaf has a ring containing the Ruby of Naught, which hides his existence from magical devices. In Zim Greenleaf, it’s revealed that it was made by Nocmell, a druid in Tir na n’Og, who gave it to Zim’s great-grandmother, the cloud fairy Aurea. And in Tippetarius, the Wizard of Oz gives the giant Orlando a ring that shrinks him down to human size when he wears it.