I’ve been looking at the Marioverse Discord group in the past few days, and I’ve seen some interesting speculation as to where certain locations from earlier games might be on the Super Mario Odyssey world map. The thing is, at least from what I understand, the map is pretty full but you don’t actually explore that much of it in-game, instead usually visiting only a small portion of each large kingdom. 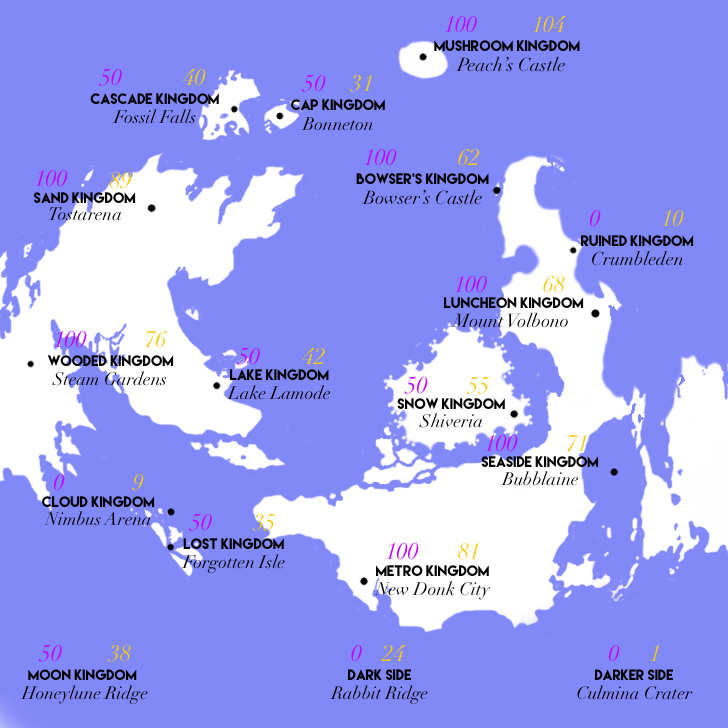 Most of these places are inspired by real-world locations: Bonneton is based on London, the Cascade Kingdom on South America, the Sand Kingdom Mexico, the Lake Kingdom on Greece, the Wooded Kingdom on the Alps, New Donk City obviously on New York, the Snow Kingdom on Siberia and Scandinavia, the Seaside Kingdom on France, and the Luncheon Kingdom on Italy. Bowser’s Kingdom is in the sky, but has classical Japanese architecture. Of course, a lot of Mushroom World locations are based on real places, Sarasaland from Super Mario Land being a good example; but the Odyssey world is big enough for the different climates to come across as a little more realistic. Obviously there’s a lot of unexplored territory on the map, and you don’t revisit places from previous games except for a tiny part of the Mushroom Kingdom. It’s typical for new games to focus on new places, but it seems like they could have at least shown the old ones. There is a map with Isle Delfino clearly pictured on it, although the location doesn’t look as tropical as it probably should be. The island from Super Mario Sunshine has a lot of Italian influence as well. The speculation I’ve seen is that Dinosaur Land from Super Mario World could be the islands to the south of the Cascade Kingdom, which also has dinosaurs.

And Sarasaland and the islands from the Donkey Kong Country games might be to the south of the Seaside Kingdom.

The location of Yoshi’s Island in Mario and Luigi: Partners in Time suggests that Dinosaur Land is close to the Mushroom Kingdom (assuming that’s the same Yoshi’s Island, as I prefer to), but I don’t think that map is to scale, and I believe you access the areas in that game through portals anyway.

Another theory involved the origin of Mario Land in Super Mario Land 2, which I’ve long wondered about, as when did Mario get his own country? Well, I haven’t played any of the Mario Party games and haven’t much looked into their stories, but the one for Mario Party 2 has it that Mario, Luigi, Princess Peach, Wario, Yoshi, and Donkey Kong decide to create a new land based on their wishes and dreams. They call it Mario Land, although Wario wants to call it Wario Land instead. 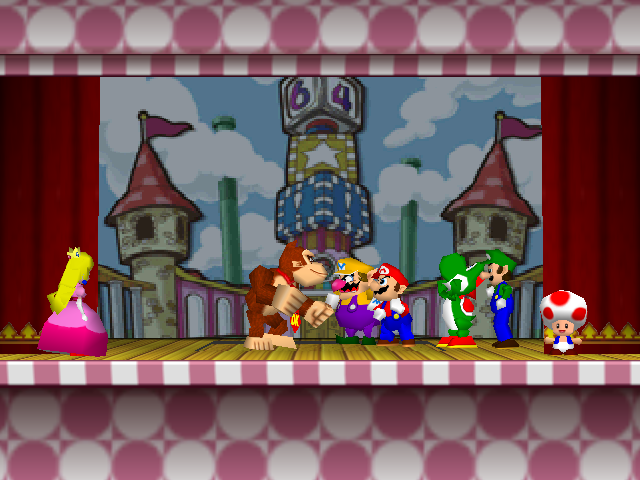 Bowser then invades it, and the others have to play mini-games in order to save it from the Koopa King. This would explain where Mario Land comes from, and why Wario is so anxious to take it over. So do the characters literally make this country by wishing for it, or is that figurative? In the Mushroom World, who knows? 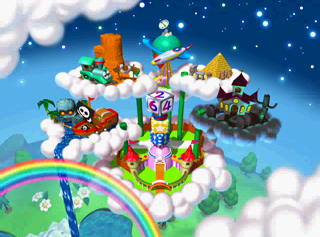 Mario Party 2 features some themed lands that don’t feature in SML2, but maybe there just weren’t any castle-unlocking coins hidden there. The picture also makes it look like some of them are in the clouds. 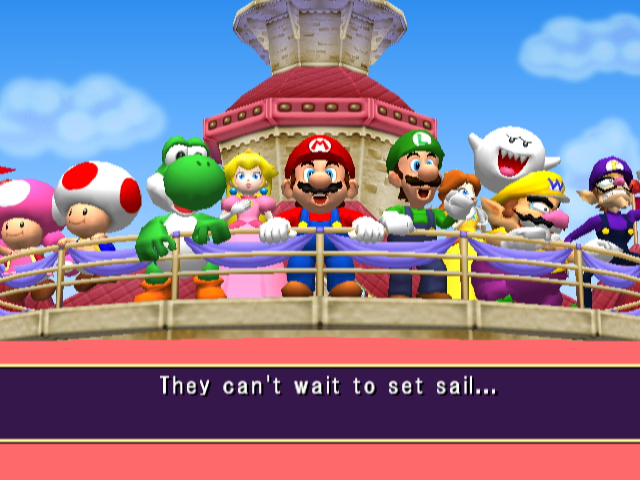 I found it interesting that Mario Party 7 is based around Toadsworth taking his friends on a cruise around the world, and the boards are also inspired by specific real places: Venice for the Grand Canal, China for Pagoda Peak, Egypt for Pyramid Park, the United States for Neon Heights, and the Netherlands for Windmillville. I’ve seen it suggested that Pagoda Peak and Pyramid Park might be in Sarasaland, as the Chai and Birabuto Kingdoms are also based on China and Egypt, respectively. 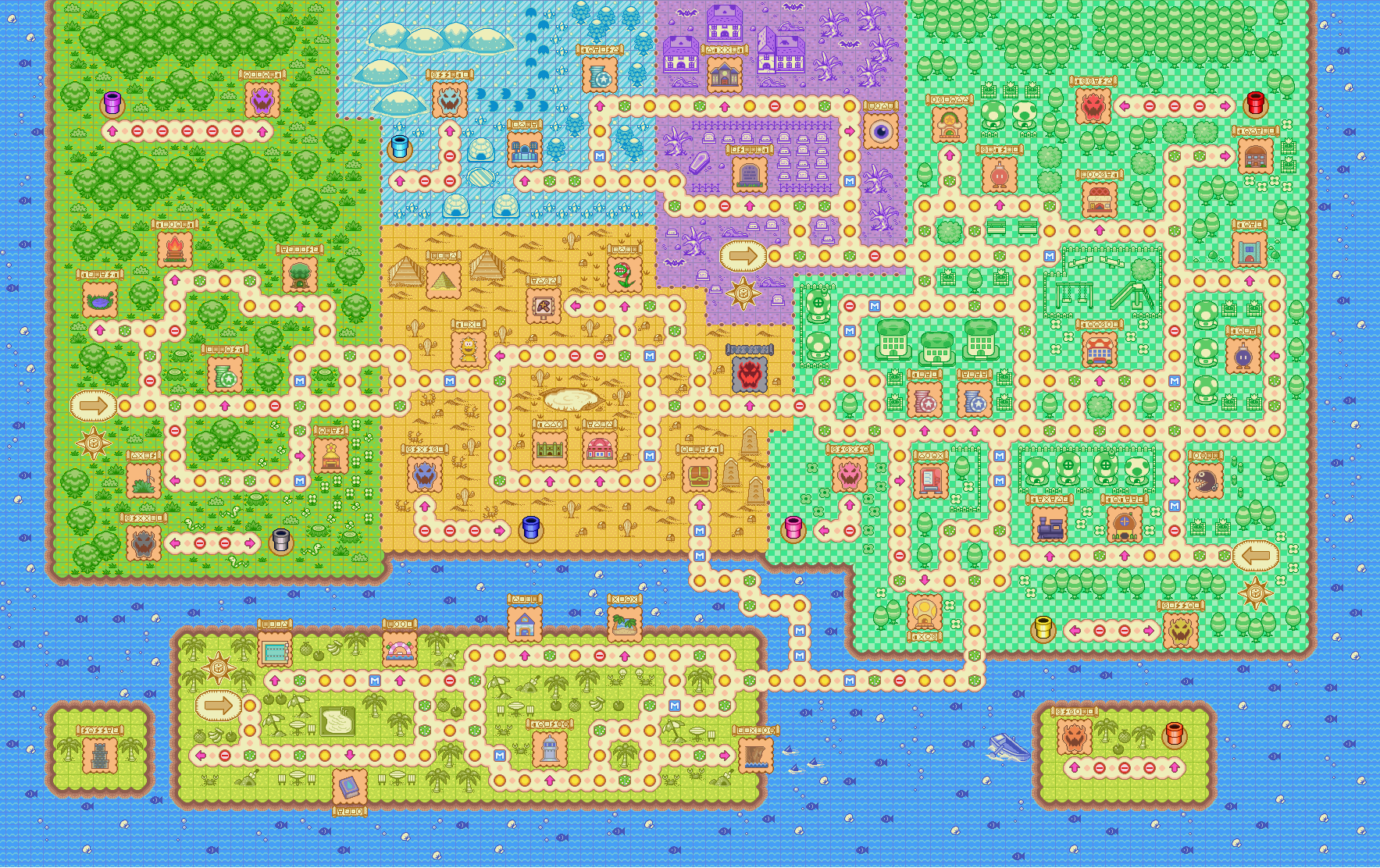 And is the Shroom City where Mario Party Advance takes place the same as or different from Mushroom City in Mario Kart: Double Dash? 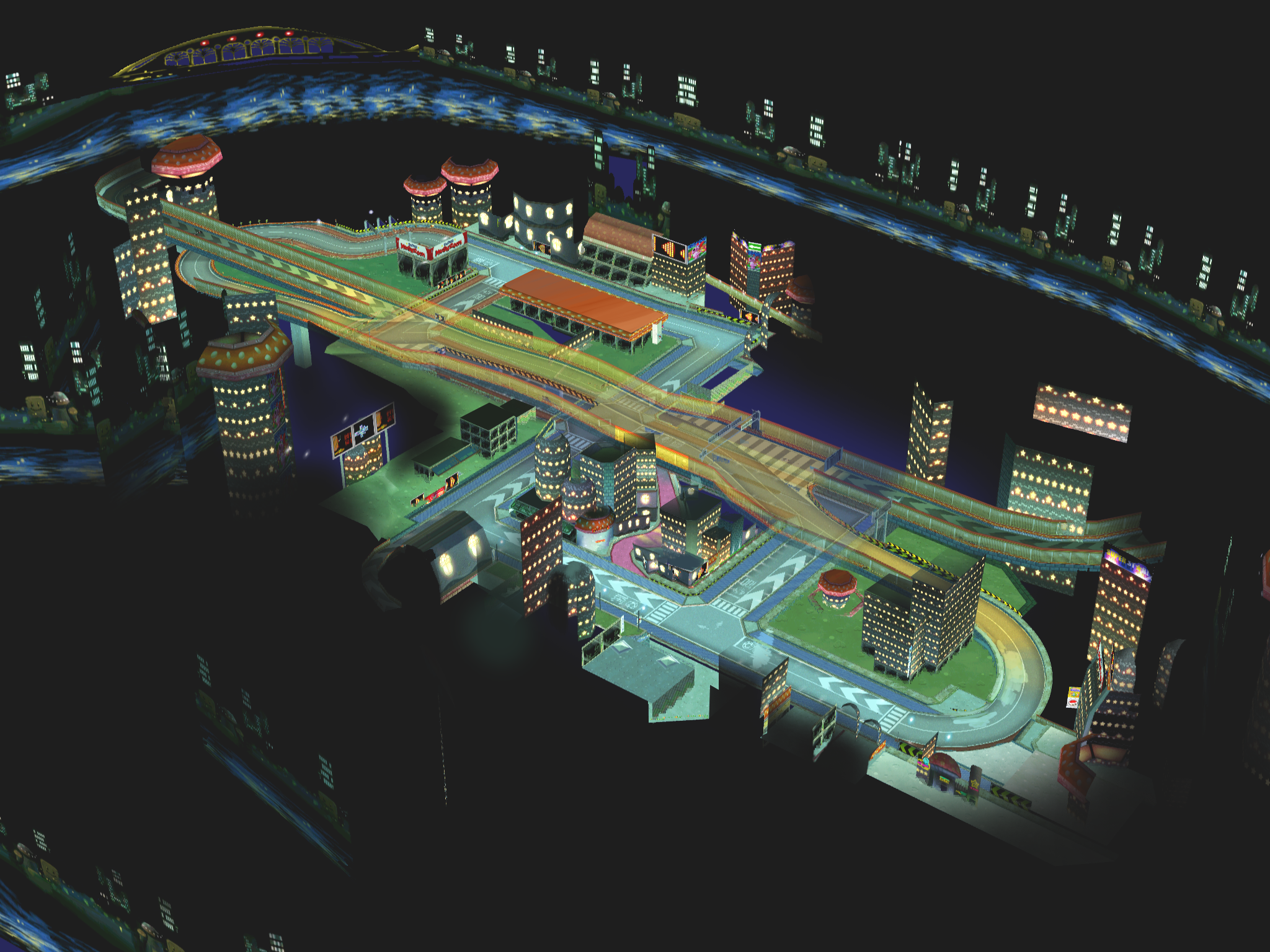 It’s almost as if Nintendo doesn’t much care about consistent geography!