I think I’ll write a bit about some video games I’ve never played. I feel a little silly doing that, but I did do some research. That’s something, right? Anyway, I like to understand what these games do in terms of developing the fictional world. After Wario was introduced as the main antagonist in Super Mario Land 2, he became an overnight success, or at least an over-several-years success. He would go on to star in his own series of platform games as a greedy antihero. In a few spin-off games, however, he’s just nasty for no apparent reason. The first of these, Mario & Wario, was never released outside Japan. I remember Nintendo Power saying it would be, but this didn’t happen. It is, however, referenced in the first generation Pokémon games.

It’s a puzzle platformer where Wario drops a bucket on Mario’s head, and he walks blindly forward while the fairy Wanda attempts to guide him through various stages by making blocks appear and fighting enemies.

She can also tap on Mario himself to cause him to reverse direction. At the end of the stage, Luigi will remove the bucket. 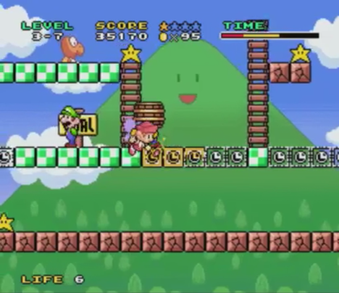 The game used the Super Famicom mouse accessory, which like many accessories wasn’t compatible with all that much. There are ten different levels, each one with nine stages. The back story has it that Mario, Luigi, Princess Peach, and Yoshi are visiting the forest where a fairy lives, when Wario flies overhead in his plane, the Bulldog, to drop the offending bucket.

The first level is the forest, while after that are a lake, a mountain, an ice cavern, a magma-filled cave, an underwater level, a bridge in the sky, a desert, and Wario’s garden and manor. Each time, there’s a different object obstructing the plumber’s view: half of a Yoshi egg, a barrel, a pipe, a vase, a jellyfish (that one must sting), a cloud, a large hat, a Piranha Plant, and an oil can. Some of these items have the letter W on them, but as Super Smash Bros. Melee points out, this is only when they’re upside down on Mario’s head. Otherwise, they’d have an M for Mario instead. 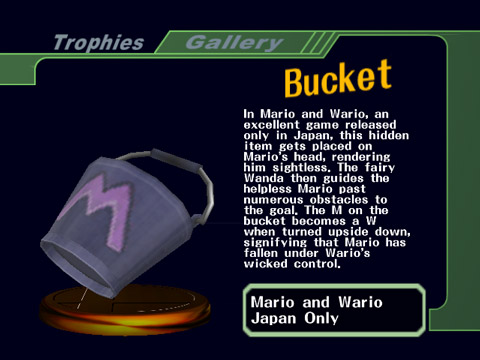 Since they only show Wario dropping the item at the beginning of every level, though, how does it reappear in every stage when Luigi keeps removing it? For that matter, it’s not clear exactly why Mario keeps wandering into new locations, although I guess he must be chasing after Wario, as the game ends at his place. So where do Peach and Yoshi come in? You can play as one of them instead of Mario, with the Princess moving more slowly and Yoshi more quickly. Looking at the names of the levels on the Super Mario Wiki, the second basically translates to Yos Lake, and has Yoshis relaxing in the background.

While the wiki suggests it could be on Yoshi’s Island, I wonder if it could be in Yoshi Valley from the Mario Kart games. Then there’s the smiling Cloud-Catching Mountain, which shares a name with a place near Tokyo, and has a Super Koopa resting on a cloud. The underwater level is called the Cheep-Cheep Sea, and I found out there’s a stage in New Super Mario Bros. U’s Sparkling Waters called “Above the Cheep-Cheep Seas,” so maybe it’s around there. The desert is the same Dry Dry Desert from other games, and the closing scene where Mario gets revenge on his duplicate shows Wario’s manor in the foreground and the smiling mountain in the background.

The other game I’m including here is also about Wario harassing someone in a forest, and this one did have an American release. In fact, there are both NES and Super NES versions, which are basically the same in gameplay but differ a bit in other ways. It was, in fact, the last officially licensed release for the NES. I’m talking about Wario’s Woods, a Tetris-like game that involves Toad trying to drive Wario out of the Pleasant Woods, where he’s brainwashed the cute forest creatures into working for him.

The woods are known to contain sprites, so perhaps it could be the same as the ones from Mario & Wario, or at least close by. Toad has to match up the creatures by color with bombs provided by the sprites, while Wario and a Pidgit sometimes produce more of them. There were Pidgits in M&W as well, actually. Wario must have ordered from Pidgit Express. Birdo, on the good side this time, comes along to cheer on Toad. 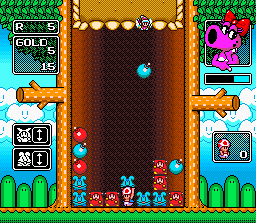 In the NES version, there’s a boss in every level ending with nine, so the ninth and every tenth after that. The bosses produce new animals to match up and destroy, and you have to defeat them by catching them in explosions a set number of times. The bosses here are a devil, a horned pig, a mermaid, a golem, a Grim Reaper, and a green dragon. After beating all of them, you fight a Wario impostor, then go through the cycle again before facing the real Wario. 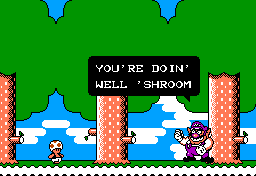 The villain taunts you after a boss fight, and gets progressively bigger, only to eventually reveal that he was inflating himself with an air pump, sort of like in the Mario vs. Wario comic. 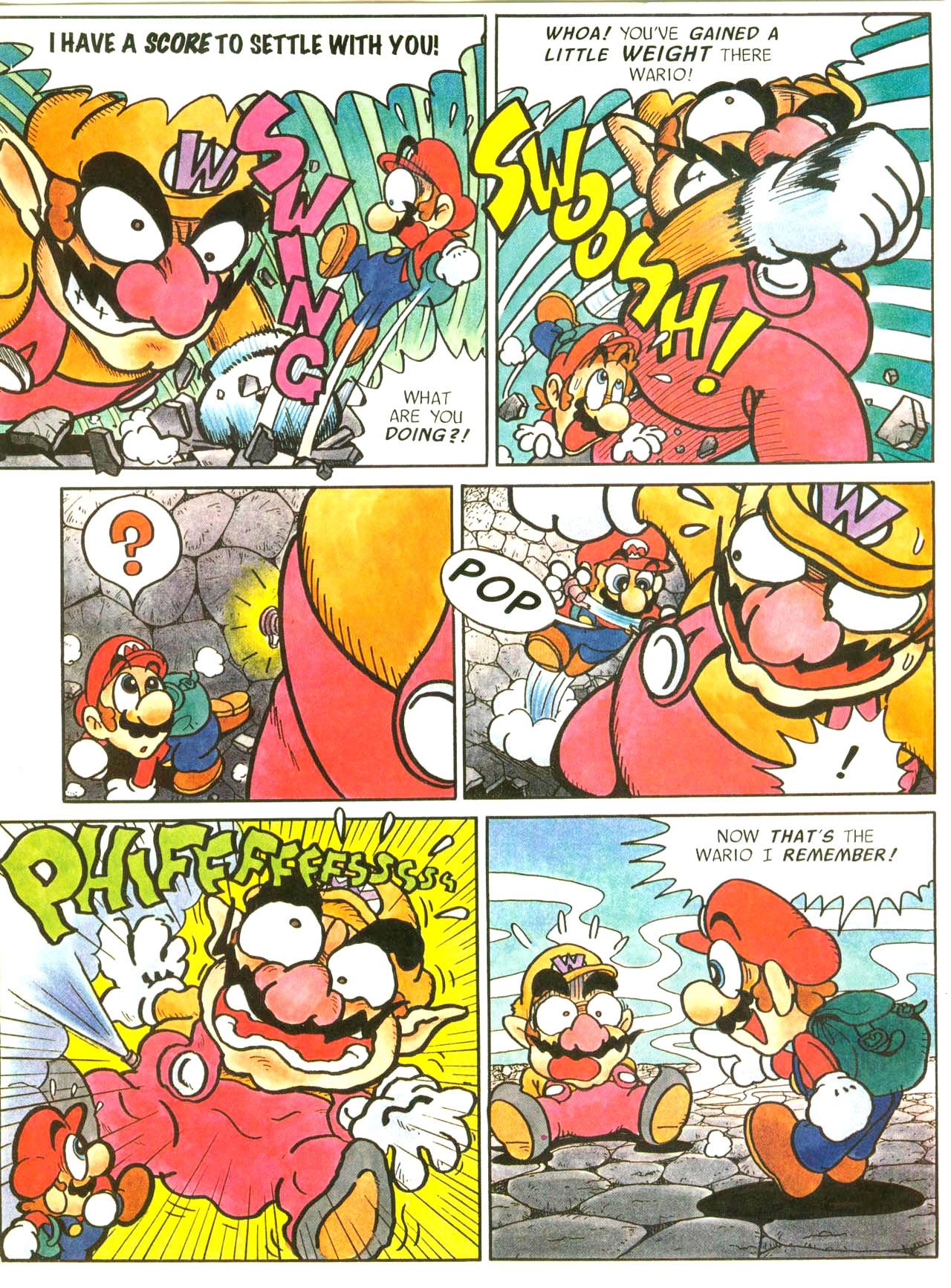 The SNES version has none of these bosses, but it does have opponents you can play against: an alien, a big-mouthed cyclops, a jester, a guy with a pumpkin head (well, it’s apparently supposed to be a pumpkin, but it’s green), a tiny hair-covered Viking, a parrot-lizard, a ghost in a beret, a different mermaid, a Zora, a frog with a mohawk and platform shoes, a blue ogre, a young witch, a hairy orange monster, a green elf, an armored knight, and Peter Rabbit. 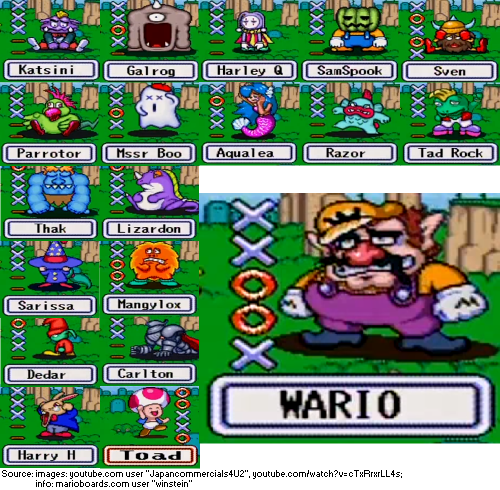 It really seems like the designers often went more for generic fantasy types than for more familiar Mario-type beings, although the alien Katsini looks a lot like Tatanga. Drago from the NES version might well be the first traditional Western-style dragon to appear in a Mario game, as opposed to the somewhat dragon-like Koopas and Yoshis. 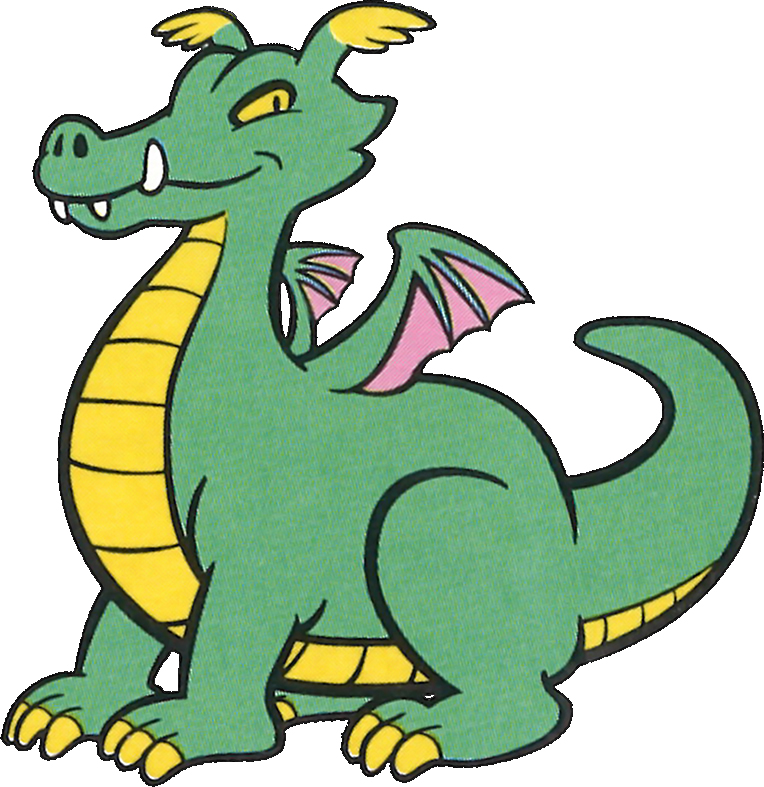 In the SNES round game, there are no bosses, but you do proceed from the normal woods to a bridge with cliffs in the background, an icy mountain, a coniferous forest, and Wario’s castle, which Toad blows up with a bomb at the end of the game. 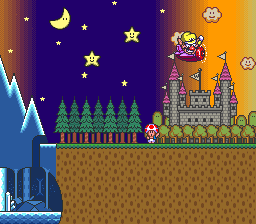 Is this the same castle he got from the genie in Wario Land? He does have a castle in later games, though, so probably not. 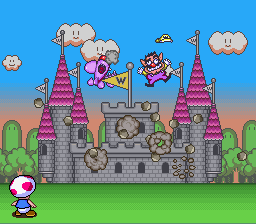 The guy has almost as many different homes as Bowser. The game description says that driving Wario out of the woods restores the animals to their normal selves, but what about the ones who were blown up?

I’m working on a map of the Mushroom Kingdom, which obviously requires a lot of guesswork. The people on the Marioverse Discord have done a lot of research in this respect, however, coming up with connections I’m sure I never would have noticed. My tentative placement of the locations involved here places the woods in the northwestern part of the landmass. In M&W, the characters proceed to a lake in Yoshi Valley, then head east to the Cloud-Catching Mountain, underground for the next two levels while heading south, underwater in the sea in the southwest, into the sky, down into Dry Dry Desert, and finally back northwest to Wario’s manor.

3 Responses to Wario vs. Everybody