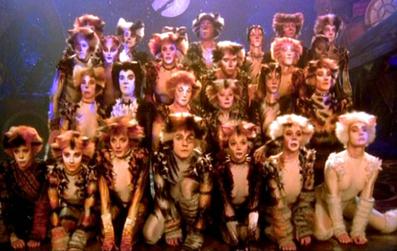 I was never that interested in Cats when I was younger, but I probably would have liked at least the T.S. Eliot poems if I’d been familiar with them. Beth and I went to see the show on Broadway about two years ago, and we saw the movie the weekend before last. And tonight, we watched her video tape from 1998 (we do have a working VCR, but we don’t usually keep it hooked up). She challenged me to compare and contrast the three versions, hence the title. I know it’s popular to hate the show, but I liked it. It’s good music with good lyrics, and it’s about cats. It’s basically an avant-garde piece, just one that’s also pretty campy. The video was of a stage production, although it didn’t include the cats going out into the audience, at least not on-camera. There’s a long dance sequence after Old Deuteronomy is introduced, and I can’t remember if it was quite as long when we saw it live. I know they moved “The Awefull Battle of the Pekes and the Pollicles,” while neither version includes “Growltiger’s Last Stand,” so I’ve never seen that in its original context. Traditionally, it comes after “Gus, the Theatre Cat,” with Gus thinking back to when he played Growltiger on stage. In the live show, they instead had Gus play the Rumpus Cat in “Pekes.” On the video, the Rumpus Cat wore a costume like a comic book superhero.

“Growltiger” might have fallen out of favor because of the racism, although “Pekes” does say “heathen Chinese” a few times. There must have been a fad for Pekinese dogs in England when Eliot wrote these poems, because they’re mentioned in several of them. Apparently both Growltiger and Macavity like to torture them. I’ve heard it’s not uncommon in stage productions for actors to play more than one role, and there were a few cases of that happening on the video, although Bustopher Jones was a separate actor while Wikipedia mentions that he’s often the same as Gus/Growltiger. Mr. Mistoffelees had a light-up tuxedo in both versions, but with LED technology, the lights were different colors in the more recent production. Grizabella gets into a flying vehicle at the end instead of just being pulled up by wires, though. The actress who played the character in the video version, Elaine Paige, was the one who originated the role in London. She’s presumably no relation to Ken Page (since they’re spelled differently), who played Old Deuteronomy, and was also the voice of Oogie Boogie in The Nightmare Before Christmas. I’ve noticed that the choreography occasionally adds a bit of personality to a cat beyond what’s in the poem. The Rum Tum Tugger’s poem (and hence song) is about how he’s contrary, but he’s shown to be a ladies’ man in the show. I know they leave out a significant chunk of “The Ad-dressing of Cats,” the last song in the show and in the collection of poems. Maybe it was too much from a human perspective, but I know Beth likes to reference “Oopsa Cat.” 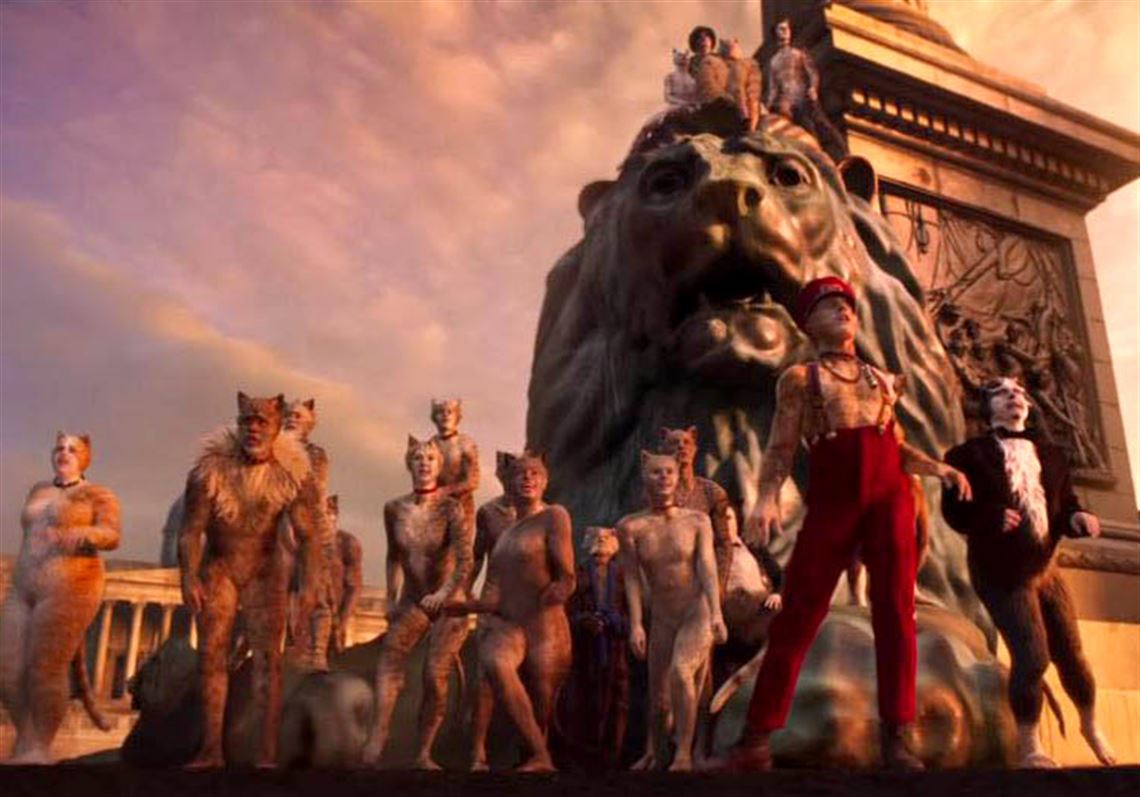 As for the movie, the CGI-enhanced cat costumes did look uncomfortably weird for a little while, but I got used to them. That said, I think a big-budget film based on a musical people love to hate was a bad risk. Critics complain that there’s next to no plot, when there was never really supposed to be. Actually, the plot is one of the odder parts of this adaptation, because for some reason they added in expository dialogue where we really didn’t need any, as well as a few subplots that didn’t go much of anywhere. Victoria is here changed from a chorus member to the main viewpoint character, abandoned and left out on the streets of London, where she’s taken in by the Jellicle Tribe. That part is fine, but I’m not sure why they decided they needed her to have a light romance with Mr. Mistoffelees, or why he was made to lack self-confidence, other than that they’re common and easy story elements. The same goes for the cats captured by Macavity using their individual skills to take out Growltiger, who here is reduced from the main character in a story-within-a-story to a henchman of Macavity’s. I guess it’s cool that they managed to incorporate him at all. The movie also cut out the other mini-story, “The Pekes and the Pollicles.” They threw in another song, co-written by Taylor Swift but not sung by her in the film itself, presumably included for Oscar consideration. It wasn’t bad, but it really didn’t fit, and the lyrics were pretty obviously not Eliot. And they withdrew it for Oscar consideration anyway, so it ended up being rather pointless. There’s a fair amount of slapstick added in, and I doubt anyone ever saw Cats and decided the main thing it was missing was the cats taking pratfalls, but whatever. I’m also not entirely sure why Macavity is so anxious to be reborn, since he has to die first, but he seems to think he can game the system. And maybe he figures a criminal mastermind is going to die sooner rather than later anyway. Since I mentioned the differing stage effects for Grizabella’s ascension, I’ll say that I liked the film’s take on it, a chandelier that turns into a hot air balloon.