Sticking It to Bowser

I’ve been playing Paper Mario: Sticker Star for over a week now. This one seems not to be all that popular among fans, for several reasons. This is the fourth game in the Paper Mario series, and the first for a handheld system. I’ve played some of the first game, a bit of the second, and none of the third. These are role-playing games with action elements, and the design gimmick is two-dimensional characters in a three-dimensional world. There are occasional mentions of people and environments being made of paper, like how Mario can turn himself into a paper airplane in The Thousand-Year Door, but for the most part it’s just a design choice. Here, however, the world being made of paper is brought up constantly, making it difficult to support my general idea that these games are all canonical. I understand that Mario & Luigi: Paper Jam, which I don’t own (yet), has the paper world existing inside a book inside Peach’s castle, making it not necessarily any less real but clearly an alternate universe of sorts. But since the PM games introduce some interesting lore for Mario’s world, I don’t want to discount them as things that don’t affect the main universe. I’ve seen the idea proposed that actual events are published as books that then become real in the paper world, and that’s probably the best way to look at it. Which brings me to another point, which is that the earlier PM games have fairly complex stories and multiple new characters, while Sticker Star is heavily simplified in this respect. From what I understand, Shigeru Miyamoto, who’s very old-school in his take on video games, prefers less focus and story and characters. So Mario doesn’t have partners, although he is helped out by a sticker fairy named Kersti, and most of the supporting characters are just generic Toads.

Then there’s the focus on stickers. Combat is turn-based, but you have to use a sticker for every action, even something as simple as jumping. It’s not that difficult to obtain new stickers, but it’s kind of annoying to have to keep doing that, especially when you don’t even know which kinds will be useful in a given place. There’s no experience system either; the only way to increase maximum hit points is to find some power-up hearts that are often difficult to locate. This means it’s often best to avoid battles, unless you can’t or you need money.

All that said, I’ve had fun with the game so far, even if it’s sometimes frustrating. It’s pretty funny, and there are a lot of classic Mario enemies and references, and varied environments. It can also be enjoyable to change the landscape by hammering things or pasting stickers in key places. It can be difficult to figure out which stickers should be used where, though. If you go into Paperize mode, the game will show you where you need to put a sticker, but not which one. Many of the key items are initially encountered not as stickers but as realistically-rendered objects, which then have to be flung at certain walls to turn them into stickers. 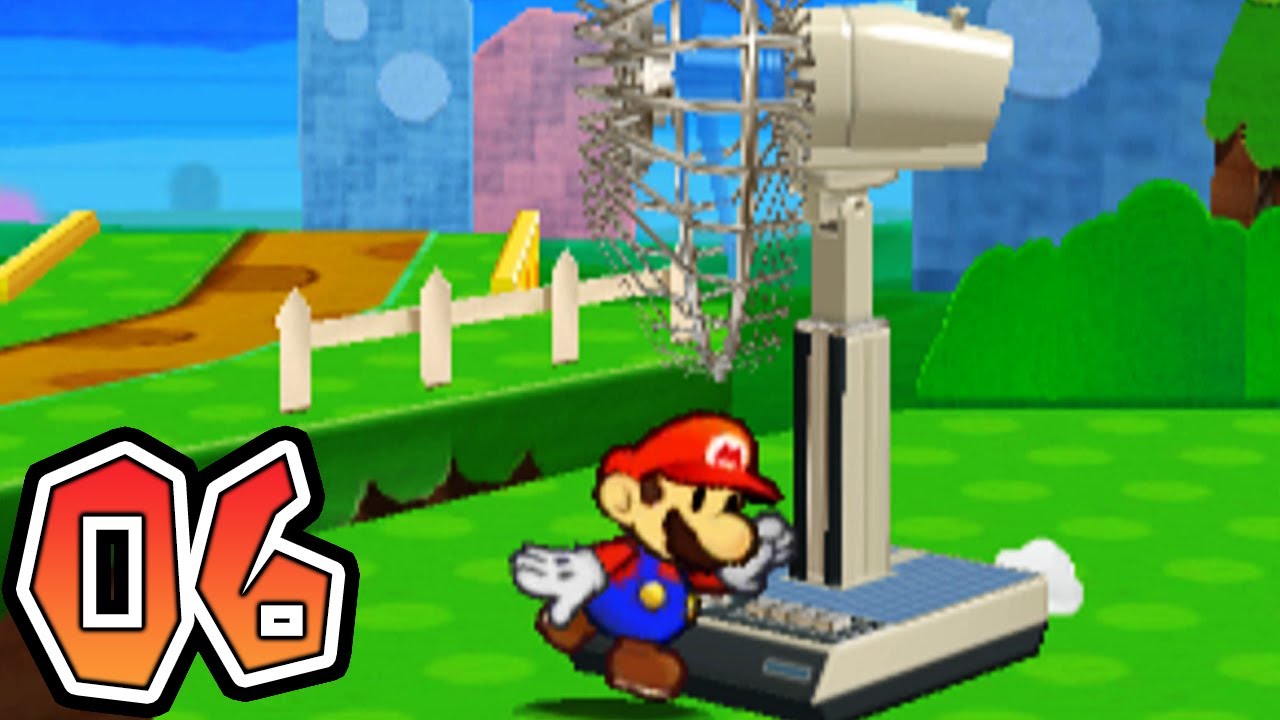 It reminds me of how, in The Lego Movie, non-brick objects like pencils and tubes of glue occasionally fell into the Lego world, and the inhabitants saw them as special artifacts. In addition to the one-time functions, these object stickers provide rather strong attacks. After you’ve used one, you can get it back either where you first found it or at a shop. The plot has it that during the annual festival in Decalburg celebrating the arrival of the Sticker Comet, Bowser shows up to steal it, and it breaks into several parts and gives special powers to him and some of his minions. 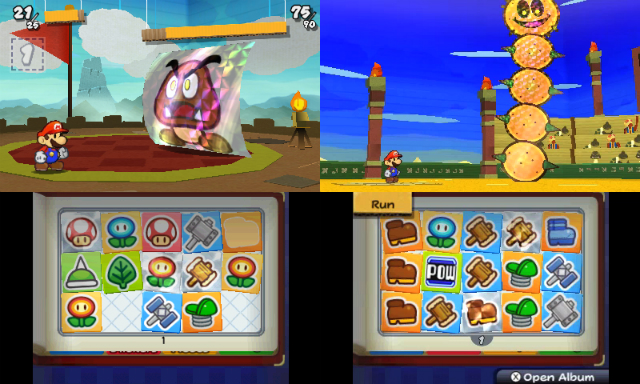 You have to make your way through six worlds, split into stages like a traditional Mario platformer. I think I’ve made it near to the end of World 3, although I’m not totally sure. As someone who’s interested in mapping the Mushroom Kingdom, I do appreciate that most of the stages have actual names for their geographic features. 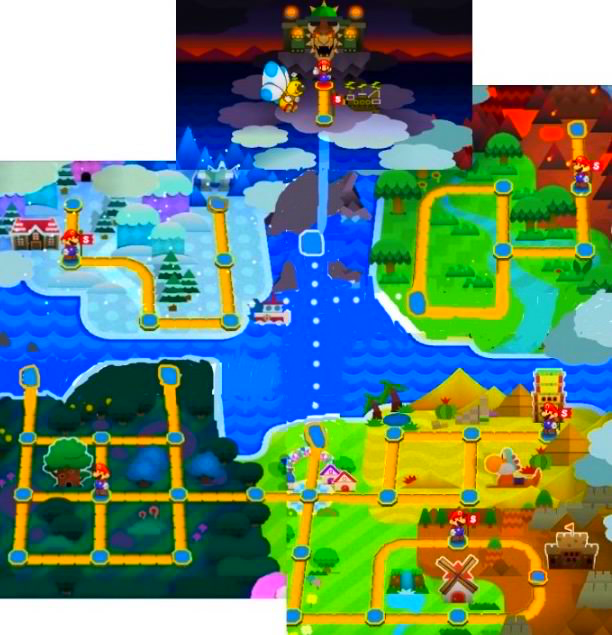 There are fan-made maps showing the Sticker Star locations on the eastern side of the kingdom’s landmass, with the right side of the map facing south in order to connect the game’s Drybake Desert with Dry Dry Desert from the original PM, as they apparently have the same name in Japanese. 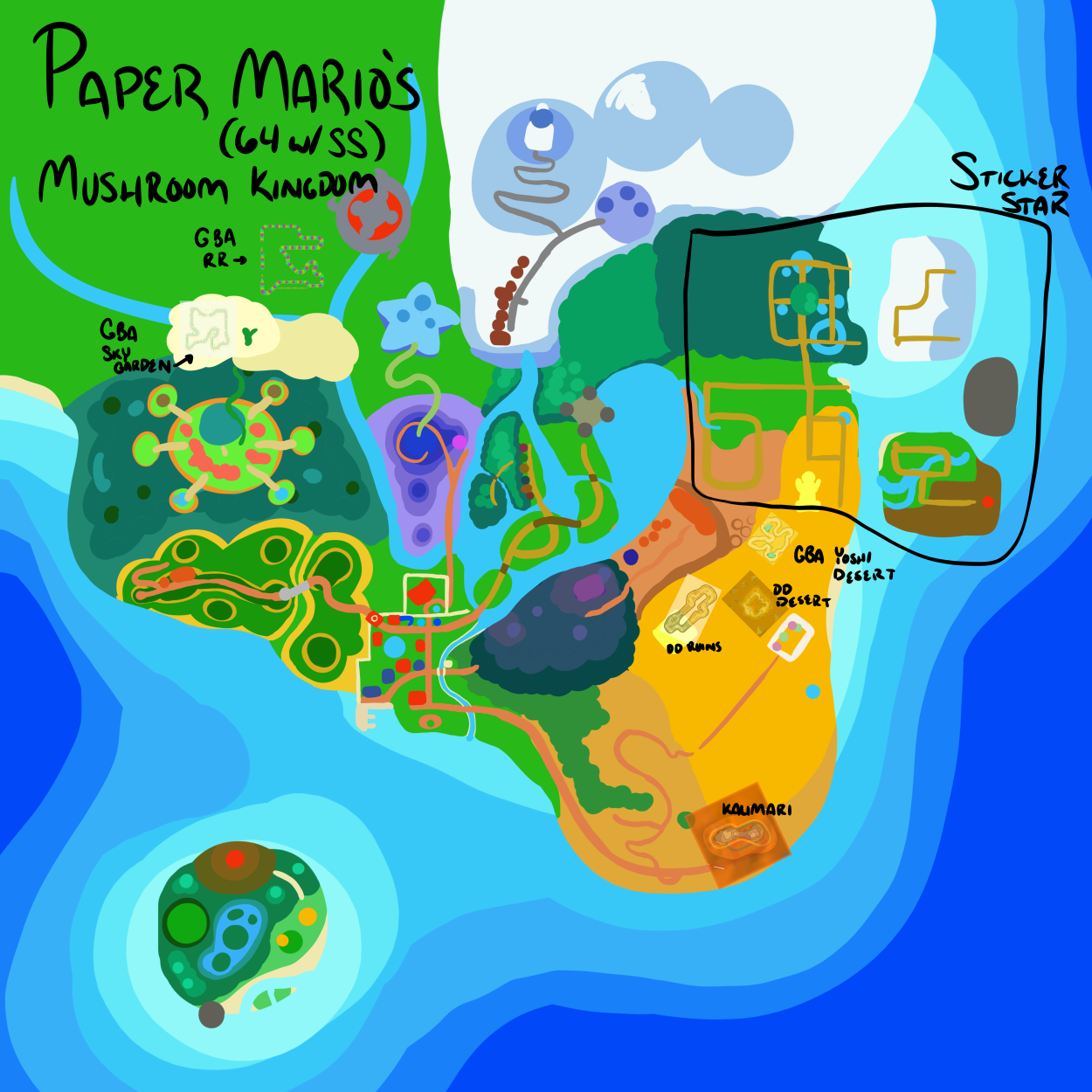 2 Responses to Sticking It to Bowser