Since I guess it’s just something I do now, I looked up playthroughs of a few video games I haven’t played and probably never will, because I’m interested in the mythology of the series. The first one, Yoshi’s Safari, was a Super NES game released in 1993 for use with the Super Scope 6. 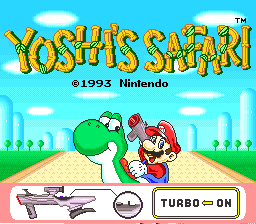 Like a lot of Nintendo peripherals, the Super Scope was heavily advertised but not compatible with very many games. This particular title was the only first-person shooter in the Mario franchise, and the fourth or so game to feature Yoshi. The story is that Bowser and his Koopalings have invaded Jewelry Land, a country near the Mushroom Kingdom, and captured King Fret and his son Prince Pine. It’s also the first English translation to refer to Princess Peach instead of Princess Toadstool, before Super Mario 64 used both. She asks Mario and Yoshi to save Jewelry Land, which they do without much convincing. Really, the title isn’t very accurate, since Mario and Yoshi aren’t going there to hunt or explore but to fight off invaders. “Yoshi’s Special Ops,” perhaps? The literal translation of the Japanese title is actually Yoshi’s Road Hunting. The map of Jewelry Land makes it look rather more interesting than it actually is in-game, but there are a variety of environments involved.

The levels are pretty short, and each one has Mario riding Yoshi and shooting the enemies he usually jumps on. Not only is the Super Scope what the player uses, but, according to cut scenes, what Mario is using in-universe. Mario with a gun is weird, if not totally unprecedented. Where did he get a bazooka, and why does he never use it again? Maybe because it requires six batteries, at least in our world. At the end of each level, there’s a boss battle, the first seven being against the Koopalings, most of them inside giant robots. Roy is in a mechanical hot air balloon, and Wendy has a shield and a flying anvil. 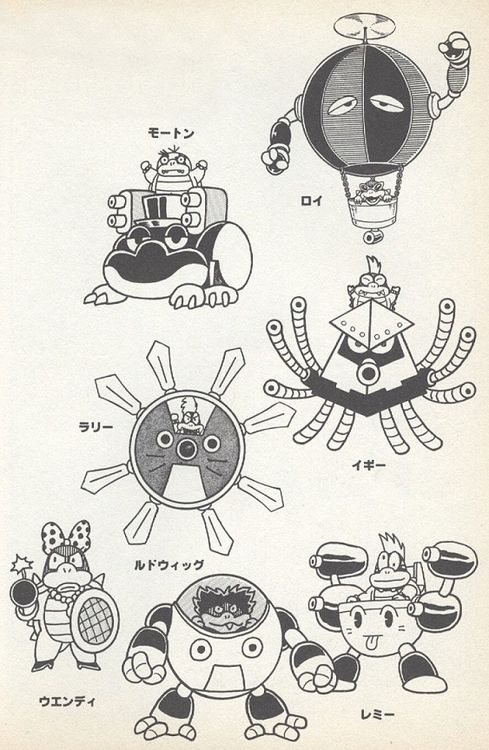 I’ve seen indications that Iggy is the one who built the mechs. At least according to Wikipedia, this bit of information came from Nintendo Magazine System in the United Kingdom. It fits with Iggy’s portrayal of a mad inventor in the Nintendo Adventure Books, although in the cartoon it was Ludwig/Kooky who had that role. It’s apparently not official, though. It is canonical that Bowser Jr. eventually started building his own mechs. The final boss is, not surprisingly, Bowser, who starts out in mechanical armor but, after losing it, continues fighting while both his arms are eventually wrapped in bandages and he has X’s over his eyes. I guess he’s not really dead, though, as he can raise a white flag to surrender, as the other bosses do.

It just kind of seems like overkill to shoot an unprotected guy with a bazooka, even if he is an arch-villain who’s also trying to kill you. And when Yoshi looks back at the camera after beating a boss, he looks really smug. 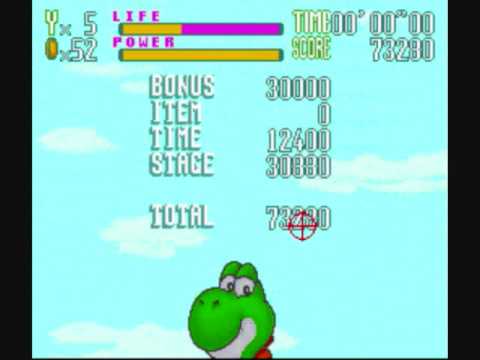 I wouldn’t mind seeing Jewelry Land return in another game, not necessarily another shooter, because we learn so little about it. Who are King Fret’s subjects? Does he normally live in one of the castles the Koopas took over?

By the way, Shigeru Miyamoto reportedly didn’t like this game. 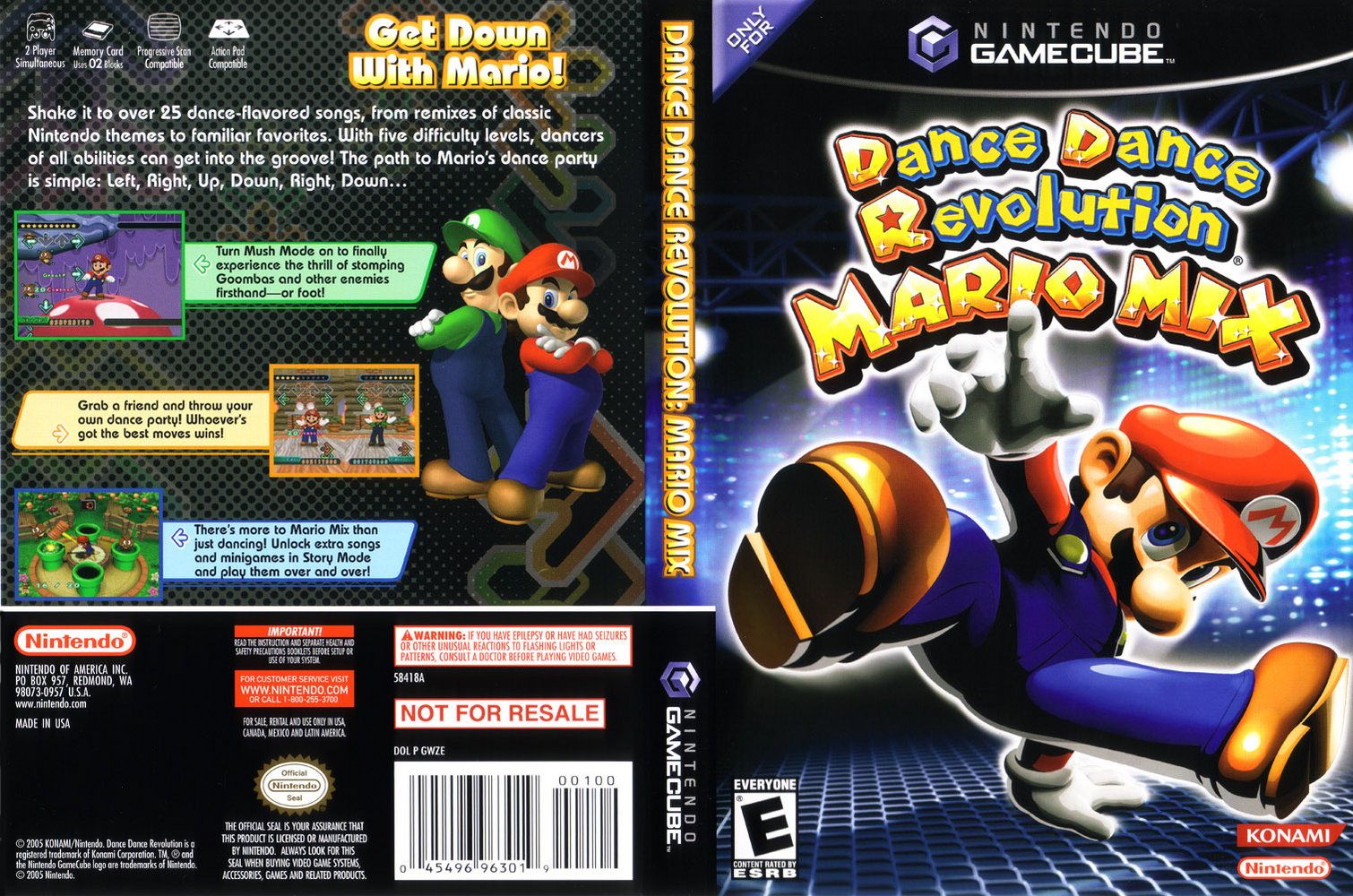 Another game I looked at is Dance Dance Revolution: Mario Mix, released for the GameCube in 2005. I remember my brother used to play DDR (even if I still think of that abbreviation as meaning East Germany), but I never got into it. Why should I want to have to be active when I’m playing video games? I glanced at the comments for the playthrough I watched, and apparently the person who put it up just used the controller instead of the dance pad, so I guess I’m not the only one.

Picture by The Bourgyman
An interesting thing about the story mode is that it gives a significant role to Waluigi. He’s defeated fairly early on, but he’s the one who sets the plot in motion. Toad sees him try to steal some magical Music Keys from Truffle Towers, although he only ends up with one as the other three scatter around the area. 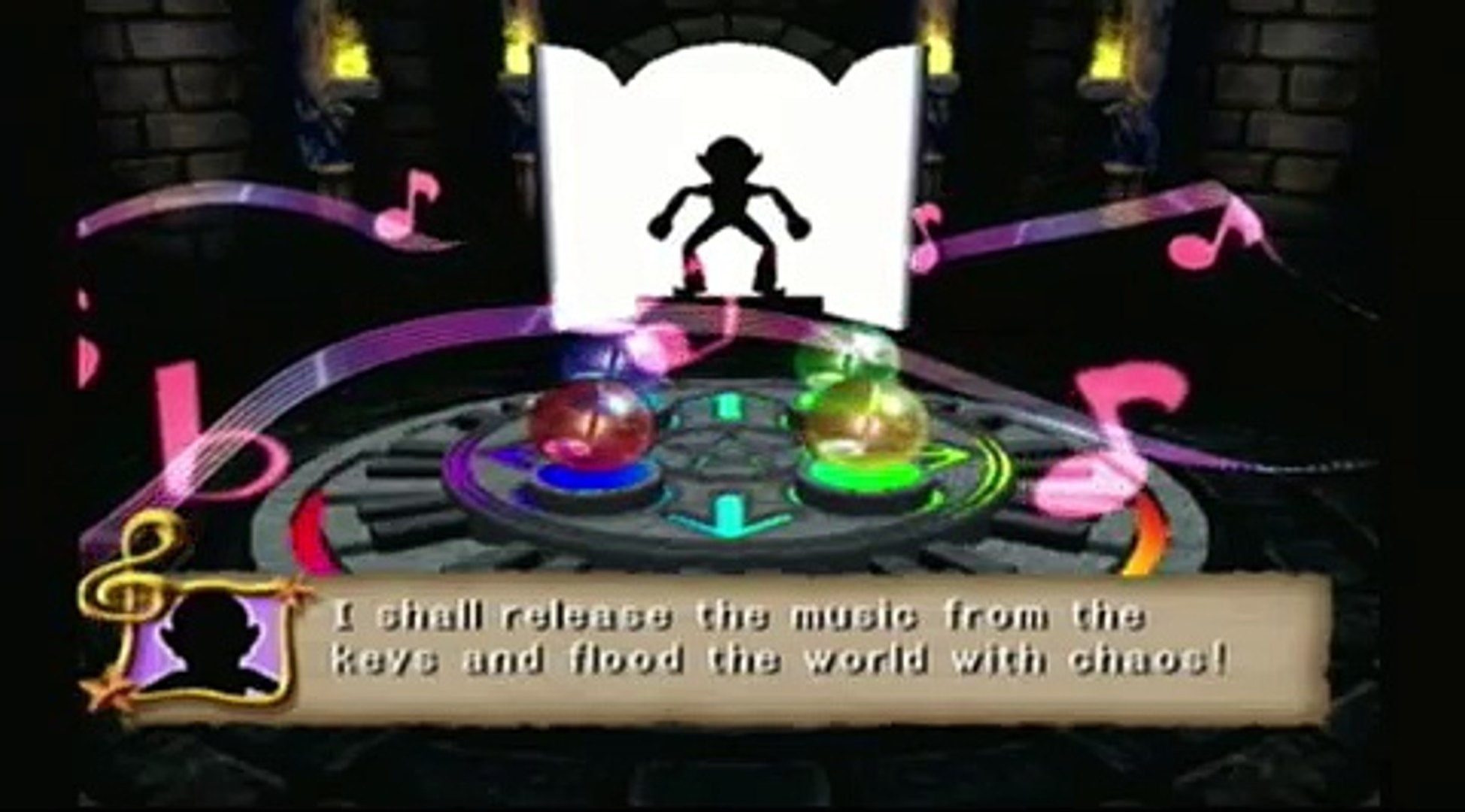 Toad seeks help from Mario (or Luigi), who fortunately lives really close by, and they have to dance to accomplish such tasks as crossing a river, fixing Toadette‘s tropical hotel, catching fish, and warming up from the cold. 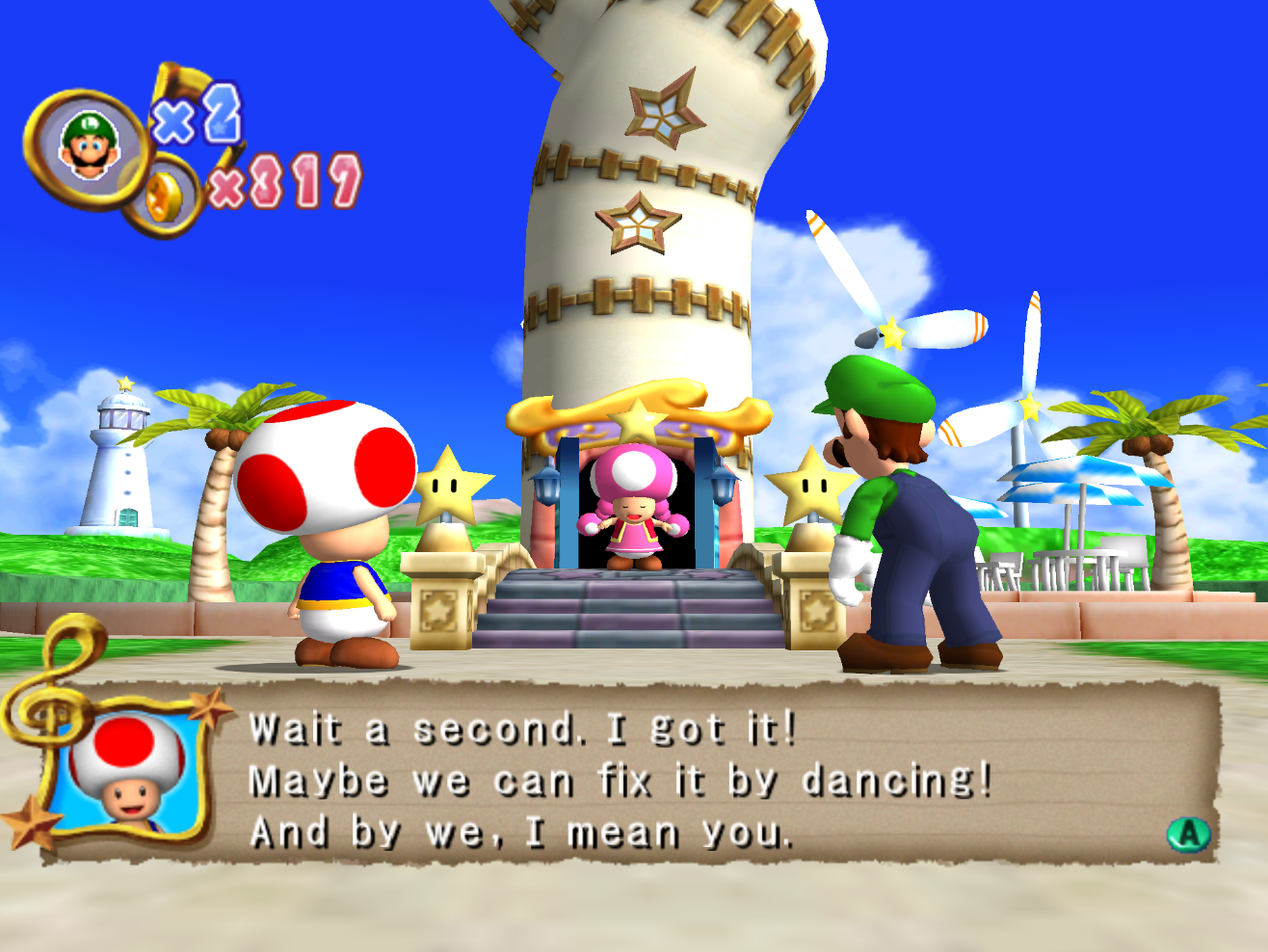 Mario also has to win dance battles against Waluigi, Wario, a big Blooper, and the Hammer Bros. When they’ve gathered all the keys, Bowser shows up to steal them again, and Mario has to have a dance-off against him as well, this time firing rockets at him while dancing. He then reveals he wanted to use the keys to cure his tone deafness. Then Mario uses the keys to spread joy and get everyone in the kingdom, including the villains, dancing. The dialogue and settings are pretty entertaining. Mario and Toad travel between locations on a horn-powered airship called the S.S. Brass. 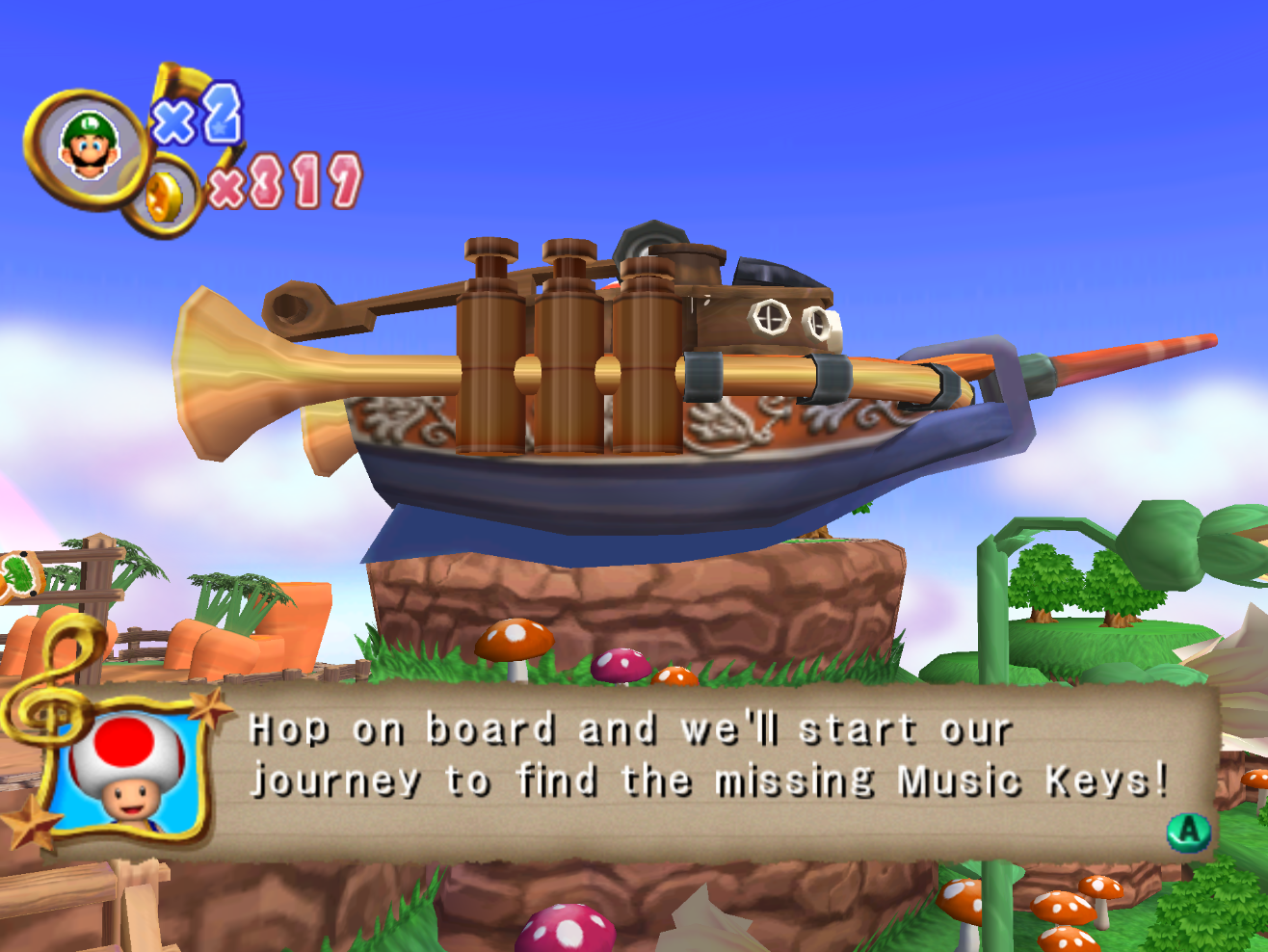 As for the music, a lot of it remixes tunes from earlier Mario games, often giving them alternate names. I have to say I’m confused by why the Hammer Dance uses the overworld theme from Super Mario Bros. 3 rather than the music from the Hammer Brother battles in the same game. There are also remixes of classic tunes that have nothing to do with Mario, including Mozart’s “Eine Kleine Nachtmusik,” Edward Elgar’s “Pomp and Circumstance,” and Stephen Foster‘s “Old Folks at Home.”

You know, I didn’t realize Bizet’s opera had an aria called “Garden Boogie.”

1 Response to Shootouts and Dance-Offs