I’ve looked at a few of the Mario stories from the Nintendo Comics System, and I thought I might as well throw a few more reviews into the mix. While my previous reviews were just of stories I’d read recently, I’m going to try to go more in order with this and future posts on the topic. Not that I’m entirely sure of the order, since many of the comics were reprinted in multiple issues. I’m just going to try to go in the order the titles appear on the Super Mario Wiki’s list. 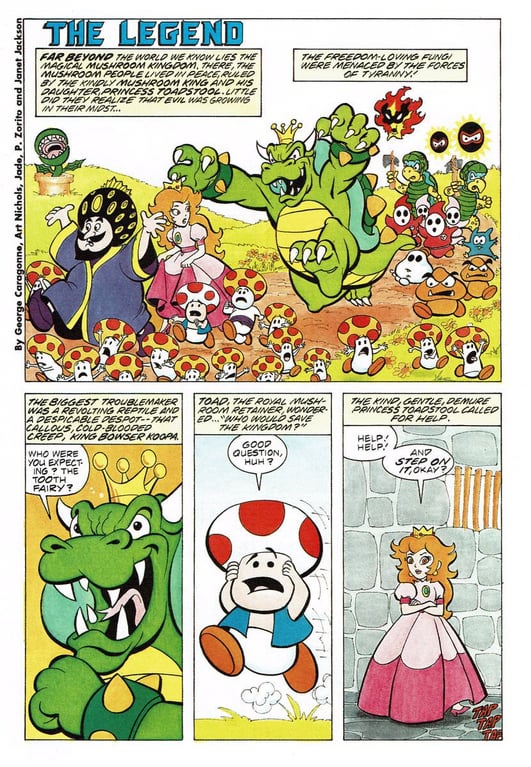 The Legend – A short introductory comic that appears in several issues, with the characters making snide remarks at the narrator. You can see that they carried over a few things from the Super Mario Bros. Super Show, like King Koopa’s design (although they DO mention that his name is Bowser) and Mario’s food obsession. It also mixes enemies from the first two Super Mario Bros. games, with Koopa’s troops including Hammer Brothers, Goombas, and a Piranha Plant as well as Shy Guys, Beezos, Sparks, a Flurry, a Ninji, and a Fryguy. While the cartoons had the Marios sucked down a bathtub drain, however, the comic shows them willingly responding to cries for help from a pipe in their own plumbing shop.

Just Deserts – Mario and Luigi are riding with the Mushroom King across a desert, when the car hits a cactus and all four tires go flat. The brothers work on the car, using parts from a nearby vending machine, while the King just lazily sits around. We then see Bowser in an underground fortress, and he looks weirdly small in this one, kind of a Chibi-Koopa.

He also has two Cobrats who comment on what’s going on, a standard feature in these comics (not always Cobrats, but usually some sort of peanut gallery). Koopa uses a computer to create a mirage, which is real for the King until Bowser makes it disappear, trapping the King underground. In a surreal moment, Mario and Luigi find a ransom note in another vending machine, obviously a deus ex machina, but a funny one. While trying to find the tiny pyramid mentioned in the note, they crash through Koopa’s fortress in an amusing bit of art, and find the King.

Mario pushes the Master Mirage Control button, and the whole fortress disappears, with a Cobrat saying it was also a mirage. So how was it created? It’s probably best not to think about it. There’s a detailed review of this one at Total Media Bridge, as well as a few others; but unfortunately the blogger didn’t keep going with this series for very long. 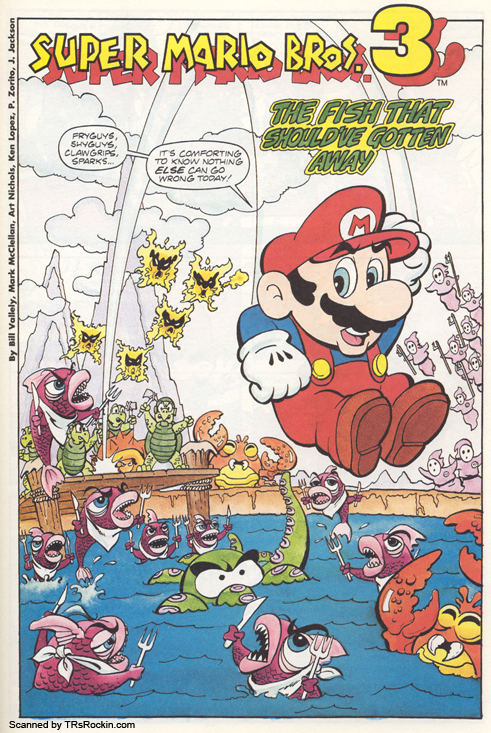 The Fish That Should’ve Gotten Away – This one, the first comic drawn for this series, introduces a recurring character, Stanley the Talking Fish, whose main trait is being obnoxious. Oddly, this is identified as a Super Mario Bros. 3 story when there’s very little in it from that game; the only thing I can see is that there are fire-spitting Piranha Plants. Mario is being chased by a bunch of bad guys, mostly SMB2 enemies, but also Hammer Brothers, and even a Gunion from Super Mario Land. Stanley shows up and tries to engage Mario in conversation while he’s busy dodging enemies, trying to get advice on his love life with a bush named Barbara (I guess that counts as a political joke for the time).

It ends rather abruptly with Mario running into some talking trees who like Stanley for some reason. I guess some people (or plants) find pathetic persistence endearing. Stanley really doesn’t do anything but talk in this, and he’s not particularly funny. He’ll be put to better use in later comics, though. But I think it’s interesting that these early comics are very light on story, and the action often takes a backseat to the dialogue. One has a plot largely resolved through silly coincidences, and both saddle the heroes with an annoying companion. Looking at the other two Mario stories from this volume, “The Adventures of Dirk Drain-Head” is about the Mario Brothers trying to buy a magazine, and there Mario is himself the annoying companion. And “You Again?” involves dreams within dreams, with no real resolution. I remember being kind of confused by this style when I first read them back in the day, but looking back it kind of seems like they were trying to shatter readers’ expectations on purpose. Not that the first few Mario games have much plot, but they are very action-oriented.

Betrayal Most Proper – From the second volume, this largely focuses on Wooster, who I believe is making his first appearance, although I’ve already mentioned how I’m not entirely clear on the release timeline. He’s the King’s rather fastidious butler, and the moronic monarch often depends on his advice. It starts with Wooster arguing with the King over the crown he bought at the Koopamart, which flashes irritating messages. Wooster quits, and shortly afterwards is kidnapped by Koopa Troopas. The King stupidly assumes that makes him a traitor, and forbids Mario and Toad to go rescue him. They do anyway, however, fighting their way past Shy Guys and Birdos to Koopa’s castle. Toad carries a Shy Guy, planning to throw him at Koopa, and he serves as the dispatcher of snide remarks this time around.

A hawkmouth from SMB2 also appears, so that game is still largely the focus; but there are some of the note blocks from SMB3 in the background.

There, they overhear Wooster being friendly with Bowser, but it turns out the mushroom butler is actually feeding him and his minions a bunch of junk food to make them lethargic, making the rescue easier. The comic touches on an interesting dilemma, as even when Mario and Toad briefly think Wooster is a traitor and the King has told them they aren’t welcome back, they still decide to rescue him because he’s their friend, putting what they think is right over their loyalty to the kingdom’s ruler. Of course, it’s lessened somewhat by how Wooster isn’t a traitor and the King is an idiot who frequently changes his mind, but it’s still there. It’s all resolved when the headstrong Princess scolds her father for dismissing Wooster. There’s more of a real story to this one. It does gloss over Mario and Toad’s journey, but it wouldn’t have worked for a short comic to get too much into that.

For some other interesting (at least to me) Mario-related stuff I’ve come across recently, there are scans of two old Donkey Kong coloring books from the early 1980s, prior to the release of SMB, going around the Internet. They portray Mario as bald, and Pauline as a singer years before that became part of Super Mario Odyssey. So were the creators of that game familiar with these books, or is that a strange coincidence? 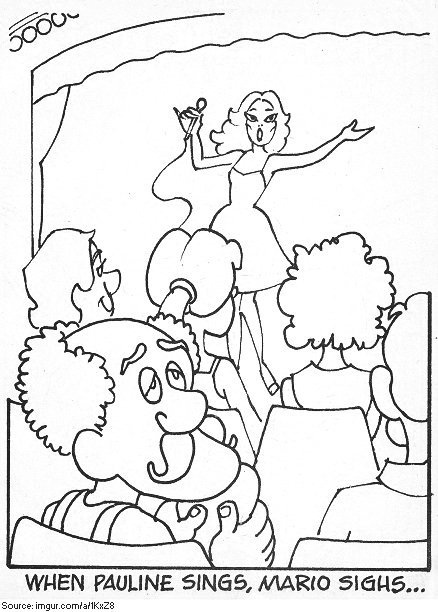 The first volume basically sets up the events of the original Donkey Kong game, with Pauline, DK, and Mario all working in an amusement park. DK falls in love with Pauline, who sings in a stage show as well as feeding and bonding with the animals. DK breaks out of his cage and runs off with Pauline, and that’s how it ends. 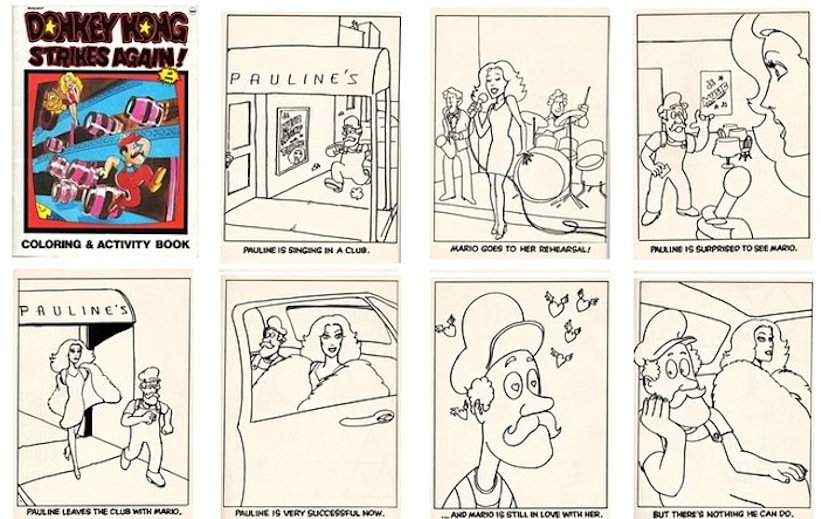 Another volume, Donkey Kong Strikes Again!, has Pauline working at a nightclub that’s apparently named after her, and she’s identified as the only one DK will listen to. There were a few more of these, but I only found scans of these two. I also saw a mention of a never-released game intended for a 1983 release called Donkey Kong’s Fun with Music where Pauline also sang, with Mario on piano, Donkey Kong on bass, and Donkey Kong Jr. on drums. 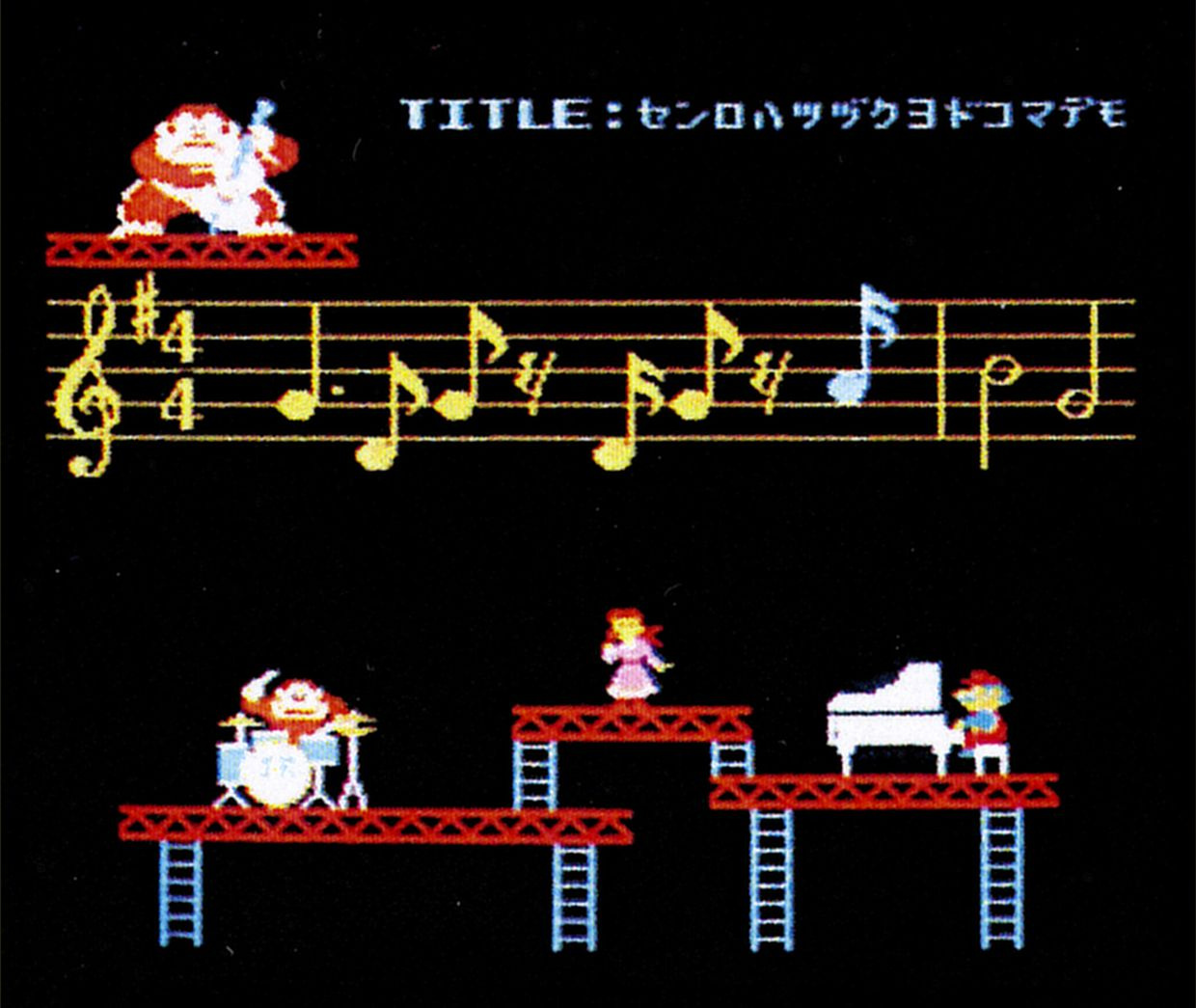 I’ve seen a lot of interesting Mario fan works online, including several promising comics that were never finished. One I found not long ago while searching the “Triclyde” tag on Tumblr (I think “Tryclyde” might be the more common spelling, but the “tri” makes more sense to me) is Super Mario Bros.: Heroes of the Stars, which combines elements of various Mario games with elements of the Kirby anime (which I have watched), and One Piece (which I’ve never seen). 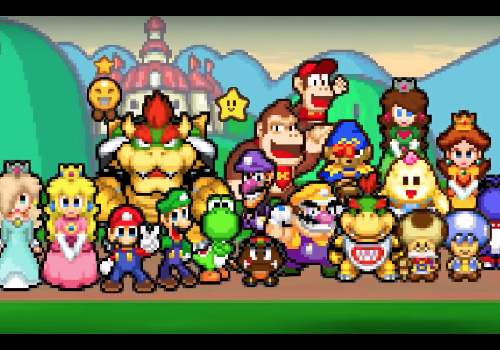 Made with animated game sprites, the story is about the Shroobs from Mario and Luigi: Partners in Time taking over Bowser’s castle, and Bowser joining Mario, Luigi, and Yoshi in trying to rescue the Star Spirits. It can be quite violent for something involving Mario, with a lot of intense fight scenes. One thing I quite like about it, as well as other fan works I’ve seen, is that it features characters from many different games interacting with each other. Wario and Waluigi adventure with Bowser Jr. and Boshi from Super Mario RPG; and Goomboss, Fawful, Wart, and King K. Rool ally themselves with the Shroobs.