Getting a Word in Edgewood

Little, Big, by John Crowley – This is apparently a pretty famous novel, although I hadn’t heard of it until I saw it mentioned on a blog. It’s kind of weird that it was published in 1981, as the style really comes across as older. It’s interesting writing, very dreamlike, with a lot of sly references to fairy lore and Lewis Carroll. The story is that of a family that lives in a strange house adjacent to the fairy world. There’s a lot of drama within the family, and from a literal perspective, the story is pretty messed up. Towards the beginning, Alice Drinkwater marries Smoky Barnable, as foretold in a family prophecy. He later has an affair with her sister Sophie, as does her cousin George Mouse who introduced the two of them. It’s like Jerry Springer stuff, except no one seems to mind that much. A member of an older generation made a deal with the fairies to have power over women, but it ended up backfiring on him, and after fathering a bunch of children he turns into a trout. Sophie’s daughter is taken by the fairies and replaced with a changeling, and Alice and Smoky’s son Auberon falls in love with a Puerto Rican woman named Sylvie who’s also taken into the fairy realm. And Emperor Frederick Barbarossa has awakened and taken on the persona of Russell Eigenblick, who is elected President. The plot meanders a lot, and there wasn’t really much of a resolution that I could tell. It works with the style of the book, though, and there are a lot of interesting details.

Spellslinger, by Sebastien de Castell – I’ll admit I read this one somewhat on and off over time, so it’s a little difficult for me to think back on the whole thing. It did hold my interest, however. It takes place in a society of magic-workers, with the protagonist, Kellen, not having access to much magic. Over time, he learns how his own family has suppressed his power due to a curse, and how his people committed atrocious acts in order to gain power. I quite liked Ferius Parfax, a cool card-playing wanderer who mentors Kellen; and the squirrel cat Reichis. This is the first book in a series, and I don’t yet know if I’ll read any of the others. It was good, but not exceptional, you know? 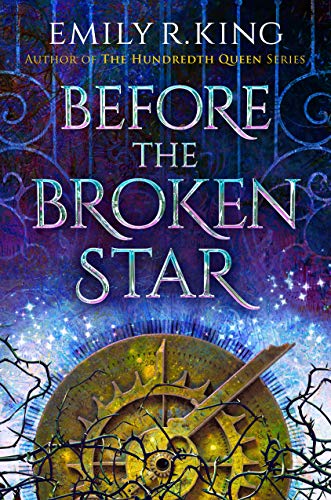 Before the Broken Star, by Emily R. King – I think there were some good ideas here. It’s a mix of genres, including elements of steampunk, fairy tale, revenge story, and mythology. Everley Donovan, who has a clock heart and lives with her clockmaker uncle, seeks revenge on the guy who killed most of her family, navy officer Killian Markham. To this end, she purposely gets arrested along with some prostitute friends of hers, and ends on a cursed island that serves as a penal colony. It turns out that Markham’s own history is tied in with the mythology of the world and with Father Time. I think, however, that there’s a lot about the world that isn’t really explained, how much of it was supposed to be fantastic, for instance. I didn’t get much of a sense of all the characters, and I’m not sure what the point was of having the inmates married off to naval officers other than to show how the society screws over women. It was still pretty good overall, though.