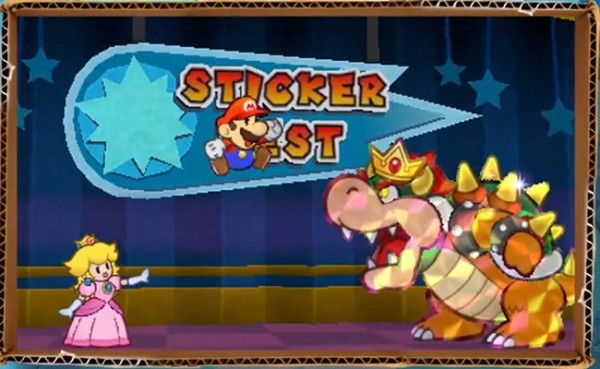 I finished Paper Mario: Sticker Star last weekend, and I’m only just writing about it now. It’s fairly slight, especially for a role-playing game, but still pretty fun. I wrote earlier about how you can only make moves by using stickers, and it’s possible to run out. Most of the time, this isn’t such a big deal, as there are stickers available to take in most of the levels. When you’re fighting bosses, though, there are often a fair number of stickers that have little to no effect. I had to give up on fights with both the Tower Power Pokey and Bowser fights due to a lack of stickers that did anything. Most of the time, the bosses have way more hit points than any other enemies, but there are Things you can use to make the battles easier. You don’t always know which ones these are before engaging the bosses, though, unless you use a guide. It can be difficult to stock up on particular stickers, because making money to buy more means fighting enemies, and you have to use stickers to beat them.

There are also places where you have to Paperize and place a particular Thing in a certain spot, but it’s not necessarily clear what Thing to use, and if you try the wrong one you lose it until you either go back to the level where you found it or buy it at the black market. While a lot of the game follows the same basic pattern, there are some creative ways that it varies the gameplay a bit. In World 3, Kamek splits a Wiggler into segments, and you have to find and fight each one before you can put him back together. 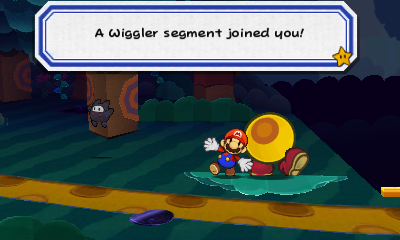 The dance Mario does in these scenes is pretty funny.
To get one of the segments, you have to participate in a Snifit-hosted game show where you answer trivia questions and play Whack-a-Mole while the room fills with poison gas. 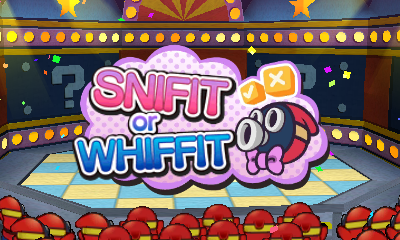 Later, there’s a mansion where you have to find and defeat all the Boos, a chairlift where you have to knock off Fuzzies and Paragoombas, a Spear Guy chase that brings you to a garbage dump full of useless but often interesting notes, and a few stages where you ride a raft down a river.

The game has six worlds, each with its own boss, although a lot of them aren’t even really unique characters.

The first boss fight is with a bunch of Goombas combined into one, then there’s a giant Pokey, the Gooper Blooper, a snowman, Petey Piranha, and finally Bowser. None of them have much dialogue, and what they do say is often just bragging about how shiny the Royal Stickers made them. Everyone is totally sticker-obsessed in this game. I don’t believe Bowser says anything at all, which is kind of weird. At the end of each chapter, there’s a short poem about how the boss obtained the Royal Sticker. There are also a few battles with Bowser Jr. and Kamek scattered throughout the game, and the latter has a nasty habit of transforming all of your stickers into flip-flops.

In the final battle, Kersti eventually lets sacrifices herself (well, very temporarily, anyway; the stakes aren’t too high in this game) so you use her as a sticker, which lets you use five stickers each round. There isn’t that much to the ending, but there is a parade scene including most of the characters from the game. Bowser also tries to touch the Sticker Comet again, only to be scolded by Kersti, but he still doesn’t face much in the way of consequences. Yes, you beat him to a pulp in the final battle, but he’s okay again soon after that.

She’s concerned about her kidnapper’s well-being, but not THAT concerned.

Since I’ve finished with that game, I started on Mario and Luigi: Partners in Time. The plot of this one has Professor E. Gadd invent a time machine that Princess Peach tests out, going back in time to her infancy when the Mushroom Kingdom was invaded by nasty aliens called Shroobs. I’m not sure if it specifies whether Gadd chose this particular time period, because if so he really didn’t do even basic research. I mean, he experienced the invasion himself! Back in the past, the baby Mario and Luigi go to the castle to be the Princess’ playmates, and Baby Bowser tries to kidnap her, because they’d had that same dynamic pretty much since birth. Due to the Shroob takeover of Peach’s castle, the babies end up in Bowser’s own castle. There, the adult Mario and Luigi, who have gone back in time to find the adult Peach, team up with their infant selves. In battle and while walking around the overworld, there are certain moves only the adults can do, and others only the babies can. While I did make it most of the way through Superstar Saga, I often find the timing in battle in the M&L games to be difficult to get quite right, which means I have to use a lot of mushrooms for healing. And it’s not just the timing, but also that there are often several things to watch at once while attacking or defending. I do appreciate that, unlike Sticker Star, this game has experience points and levels, which means you eventually get stronger just by fighting enemies. It’s pretty classic RPG stuff. The time travel isn’t taken all that seriously, probably the best way to go for a game like this. Baby Peach and younger Toadsworth end up in the present, and while at first the older Toadsworth is bothered by his younger self, they soon team up to babysit together. Although Bowser and Kamek are sort of on the same side as they want to get rid of the Shroobs as well, they still frequently cause trouble for the Mario Brothers. Kamek mentions kidnapping the baby brothers before, but doesn’t dwell on it; it’s just kind of an “oh yeah, I know you” bit of dialogue. So far, I’ve made it to the Gritzy Desert. Before that, the Marios encounter Shroobs turning both Toads in Toadwood Forest and Yoshis on Yoshi’s Island into fuel. 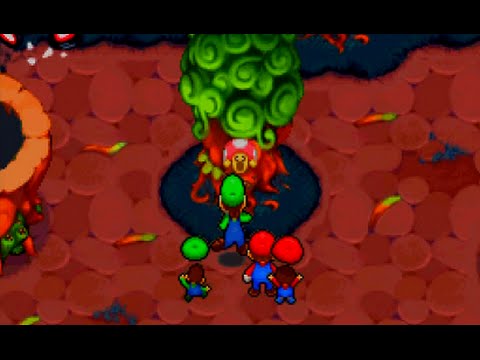 It’s fairly dark in that respect, although there’s a fair amount of humor along the way as well. One notable section has the brothers and Baby Bowser swallowed by the Yoob, a giant Shroob-controlled dinosaur who eats Yoshis; and you have to get them out of his body by freeing the Yoshis so they can open passages.

This is also where you meet Toadbert, a Toad who went back in time with Peach but lost his memory, whose catchphrase is “by boogity!”

In addition to standard Mario enemies and variations on them, there are also several sorts of Shroob you can fight, including ones who submerge into sand and ones who attack with remote-control robots. The locations you visit are reached through time holes scattered throughout Peach’s castle in the present. You can’t just walk from one to another, which makes the world map somewhat unreliable.

The locations of the desert and Hollijolli Village do match up pretty well with the Dry Dry Desert and Shiver Region from the original Paper Mario and other games, however. I doubt Yoshi’s Island is really that close to the kingdom, though.