I might as well finish up my write-ups on the Super Mario Bros. stories from Valiant Comics, and by that I mean the ones I could find scanned. I don’t think I’ve ever seen “Elect Mario for Man of the Year” or “Tanooki Suits Me” at all, and I’ve only seen the end of “Minor Defects” on Tumblr. 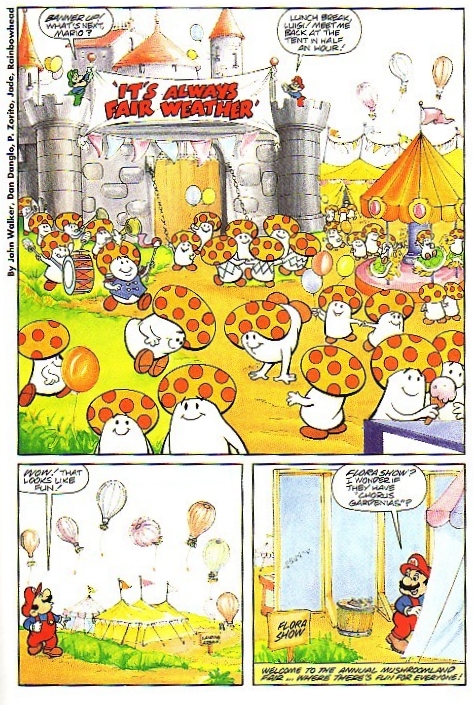 It’s Always Fair Weather – The Annual Mushroomland Fair is being held, and Bowser has already shown up to ruin it! No, wait, it’s just Luigi in a costume, for the Douse the Bowser dunk tank.

But the actual Bowser sees it and gets angry, so he uses a machine to create a cyclone that blows away some of the hot air balloons in which Toads are riding.

Meanwhile, Mario eats all the cakes entered in the fair, and uses a toothpick that turns out to have a leaf that gives him raccoon powers.

Since he’s unfamiliar with the transformation, I guess this must be before the events of Super Mario Bros. 3 proper. That is, if you care about fitting apocryphal material into a timeline, which I do. And based on information from later games, the plant must have been from the Tail Tree.

Mario flies off and saves the Toads, gets a kiss from the Princess, and sends Bowser off in a cyclone from his own machine.

And he’s not even commenting on King Koopa’s sexuality!

The Revenge of Pipe Ooze! – Mario and company are at a Dirk Drain-Head convention in Pipe Land doing live-action role-play. Mario is dressed as Dirk, Luigi as his sidekick Snakey, the King as the villainous Pipe Ooze, and Toad as his minion Muck. The Princess is Baroness Blueblood from her favorite comic series, although I guess it’s possible there was a crossover at some point.
I’m really quite intrigued by the Baroness cosplay. Kind of a Star Wars sort of look, isn’t it?
I wonder whether, if the series had been more successful, Valiant would have put out a real-life Dirk comic. I know Bongo Comics did some Radioactive Man ones. Maybe it’s funnier when we only see the Dirk stories described second-hand, though. The attendees are specifically acting out the story “Hot and Cold Running Brains.” They run into a Piranha Plant dressed as Dirk’s friend Rusty Water, who suggests the brothers switch suits. They do, with Mario justifying it by saying that Dirk and Snakey switch minds in the comic they’re acting out. As you can probably tell from the pictures of Dirk in this and other stories, Luigi looks just like him, making Mario jealous.

Bowser is also at the convention, trying to teach an ambush lesson to his rather dimwitted son Lemmy.

They steal the Pipe Ooze and Muck costumes from the Mushroom King and Toad, but Lemmy wants to play the game, and remembers that Muck switches sides in that particular comic. So he attacks his own father, and Mario follows suit after Luigi convinces Bowser that he doesn’t have much of a choice seeing as he’s surrounded by enemies. And King Koopa tells Lemmy that his attacking a family member counts for extra points. This comic also has a few examples of the Toads being even more fungus-themed than usual, including Toad enjoying being coated in slime and the King wanting a slime burger and a mold shake.

The Buddy System – This one begins with Mario and Luigi trying to stop the explosions coming from the castle pipes. Mario discovers a big sneaker that turns out to be Bowser’s. When he goes to investigate, he finds King Koopa and his son Lemmy trying to use bombs to blow up the water main, which would in turn shut down the transport tube system, and Bowser could get rich with a taxi service. Lemmy, not being too bright, has planted a bunch of bombs in the wrong places. Bowser is wearing the other shoe, I suppose because he’s in the sewer.

As per “The Venice Menace,” he hates it when his tootsie-wootsies get wet.

After an explosion, Mario and Bowser are taken prisoner by the giant subterranean mice from “A Mouser in the Houser.” As we learned in that comic that they invented the transport tube system, that makes sense. Lemmy also makes a brief mention that Mouser, the former ruler of these mice, told him about the water main. These mice turn out not to be all that bright, though, as they end up blowing up the main themselves. Mario and Bowser have to work together to open a valve and drain out all the water. This doesn’t last for all that long, since these stories are only ten pages long, but it’s still a good idea, and I like that they have some level of rapport but don’t trust each other. After they open the valve and escape, Lemmy shows up and sets off another bomb.

It’s interesting that, while most of the Koopalings only appear in one story and Wendy in two, Lemmy shows up in three. The others might well have gotten their time in the spotlight if the series had continued, but the writers seem to have had a lot of fun with Lemmy in particular, who here is eager to please his father but rather dimwitted. Speaking of fathers, Bowser tells Mario that his used to say there was no problem big enough to run away from.

He had previously suggested in “Bedtime for Drain-Head” that his dad was a fugitive from the law, so it kind of adds up. Anyway, when Mario gets back to the castle, he finds that Luigi was given the credit for fixing everything, but he’s too exhausted to care.

The Doctor Is In…Over His Head – This is based on the Dr. Mario game, which was kind of a bizarre idea in the first place. Not in terms of gameplay, which is pretty straightforward, but in how a blue-collar worker like Mario is suddenly a doctor. Shigeru Miyamoto has even basically said that he’s probably not licensed. What’s even worse is that the recent mobile game Dr. Mario World has pretty much everyone being able to serve as a doctor, including Bowser, Donkey Kong, and baby versions of the characters.

The implication seems to be that the Mushroom Kingdom doesn’t really have a proper medical licensing system, and anyone who can throw pills can call themselves a doctor if they want. The comic more or less confirms this idea. Dr. Waldo Bloom at the Mushroom Kingdom General Hospital calls Mario for an emergency. Mario naturally assumes it’s to do with plumbing, but instead Bloom needs a research assistant. He immediately starts calling Mario a doctor, even before he agrees to the proposition. Dr. Bloom tells how they’ll treat anyone who needs it, even villains, although they have to sign agreements promising to be good from then on. It’s apparently not always effective, however, as a Goomba simply breaks the clipboard and runs off.

A Goomba in a tam o’ shanter, no less.
Dr. Bloom shows Mario and the Princess a microscope, allowing them to view some viruses the doctor has isolated in a dish. They manage to escape, however, and after a chase fall inside the microscope. The Princess, who carried Mario’s plumbing tools because Luigi was busy, insists that he use them. so Mario uses a plunger on the microscope. Unfortunately, this allows the viruses to grow to human size and escape, Wogglebug style, wreaking havoc in the region (which the Wogglebug didn’t do). Each virus is given its own name and powers: Fever, the red one, who produces heat; Chill, the blue one, who freezes people; and Weird, the yellow one, who makes Dr. Bloom break out in spots and grow antlers.

They release a lot of smaller germs as well, but while the three giant ones talk, the little ones only communicate in meaningless strings of letters.

Mario finds some vitamin pills in Bloom’s lab coat, and finds out that tossing them at the viruses in the right color combinations will destroy them.

At the Princess’ suggestion, Dr. Bloom decides to take up golf, but he’s terrible at it, leaving Mario to serve as the doctor in addition to his plumbing work and Koopa-thwarting. You know, Mario was in some golf games, so maybe he should be Bloom’s golf tutor as well. Shouldn’t a hospital the size of Mushroom Kingdom General have already had more than one doctor? The final panel reveals that one of the giant viruses survive, possibly Chill, even though he was in the exploding pile with the other two. Now if only Dr. Mario could get rid of the coronavirus! (See? A topical reference!)

I’ve played a little more of Mario and Luigi: Partners in Time, but I was annihilated by the Elder Shrooboid in the Star Shrine. I had a bit of false confidence because his first form took a while to beat but wasn’t that hard, then I found out he has another one. And in that form, he uses flying saucers that can cause major damage. 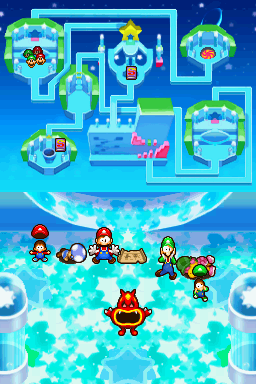 I also decided to check out Super Mario Land 2: 6 Golden Coins, which I found I could download for fairly cheap. I generally prefer to own physical copies of things, but sometimes it’s not really practical. I’m really not very good at platform games, and it can be a little difficult to judge how far Mario can jump in this one, so I’ve died quite a bit. Interestingly, the levels you cleared stay cleared when you get a game over, but you lose the titular (subtitular?) coins and have to fight the bosses again. Wario would probably have had more luck just keeping the coins inside the castle. 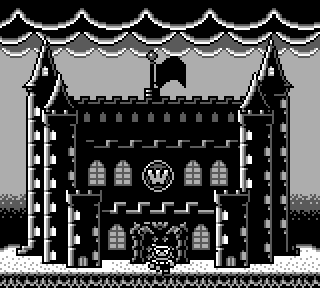 I guess the most practical way to do it, other than gitting gud, would be to try to finish every level EXCEPT the boss ones. It’s a pretty creative game, using world themes beyond the usual environments. There’s a tree with giant bugs and deadly forest creatures, a house and yard where everything is enormous, a mechanical statue of Mario, the inside of a whale, and even outer space. Enemies include the typical Goombas, Koopa Troopas, Piranha Plants, and Bullet Bills; but there are plenty of new faces as well. There are cow-fish that swim in sap, hedgehogs (no relation to Mario’s rival mascot at the time, I’m sure), nasty one-eyed children, masked enemies inspired by Jason Voorhees, cannon pigs, toy soldiers, and sharks with boxing gloves. 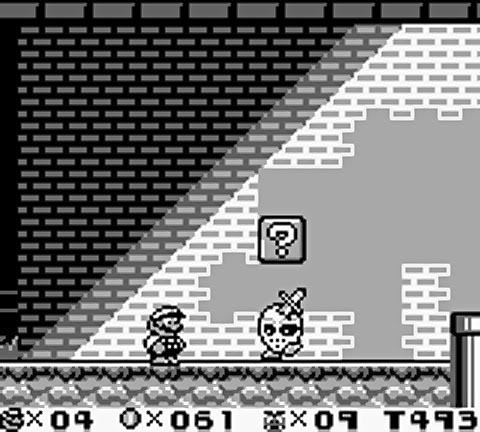 A unique power-up is a carrot that gives Mario rabbit ears, which he can use to flutter downwards. I believe the Tanooki Suit in Super Mario 3D Land has that same power. 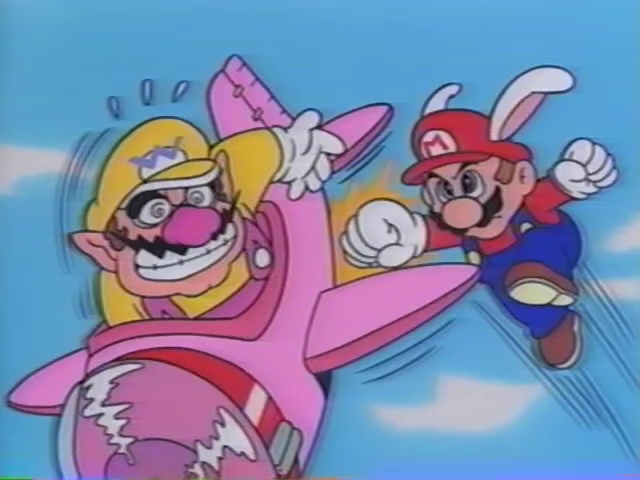 1 Response to Douse the Bowser