There are some significant SPOILERS for all three of the films I talk about here, so don’t say I didn’t warn you! 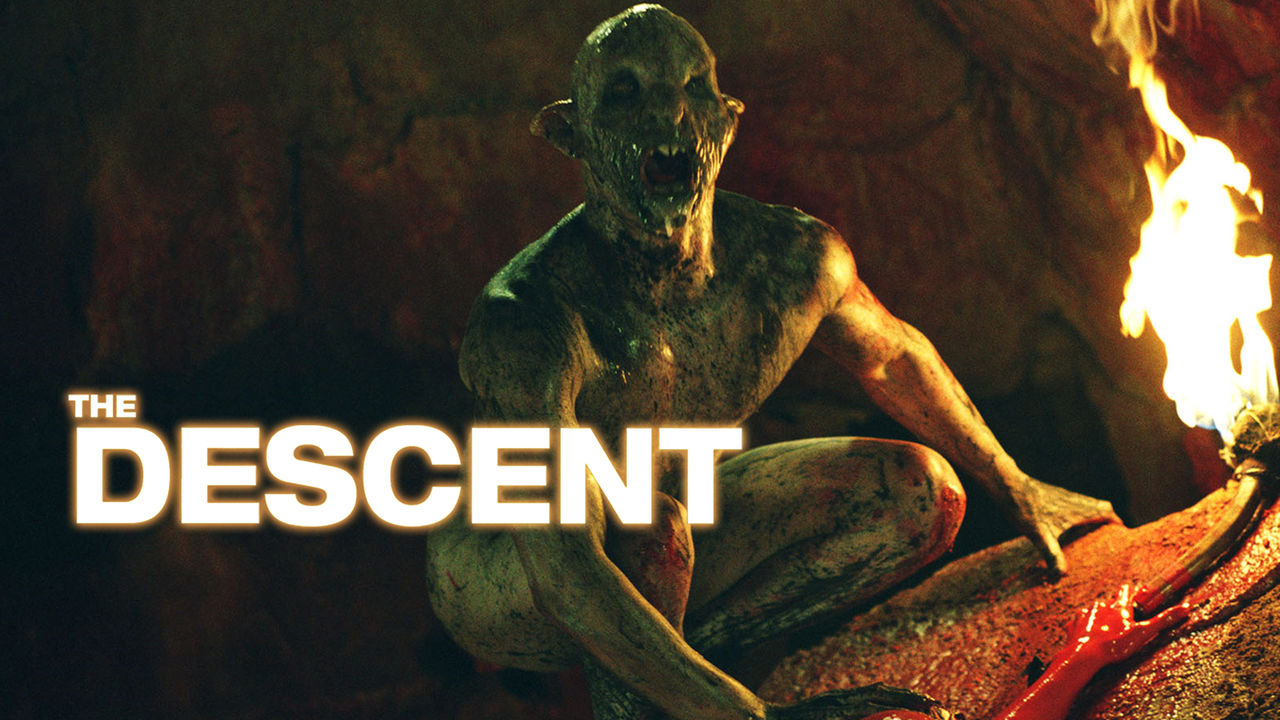 The Descent – Beth had seen this before, but she wanted to show it to me because it’s pretty well-regarded. She said she liked it better this time around. I thought it was effective, but can’t think of that much to say about it. It’s about a bunch of women, one of whom, Sarah, loses her husband and daughter during a car accident in the beginning scene, going spelunking. The plan is to explore a cave with a low difficulty rating, but one of them tricks the others into going into a previously unexplored system instead. Not only does everyone go crazy from being lost underground, but there are also weird humanoid monsters living in there. I thought the monsters were a strangely fantastic turn for a movie that was pretty realistic up until that, and Beth suggested that it’s possible they were hallucinations. Since the protagonist ends up hallucinating that she escaped, it could be. I also didn’t catch that one of the other women had had an affair with Sarah’s husband, which is why Sarah ends up maiming her leg and leaving her to die. It’s pretty dark, and not just in the literal sense. 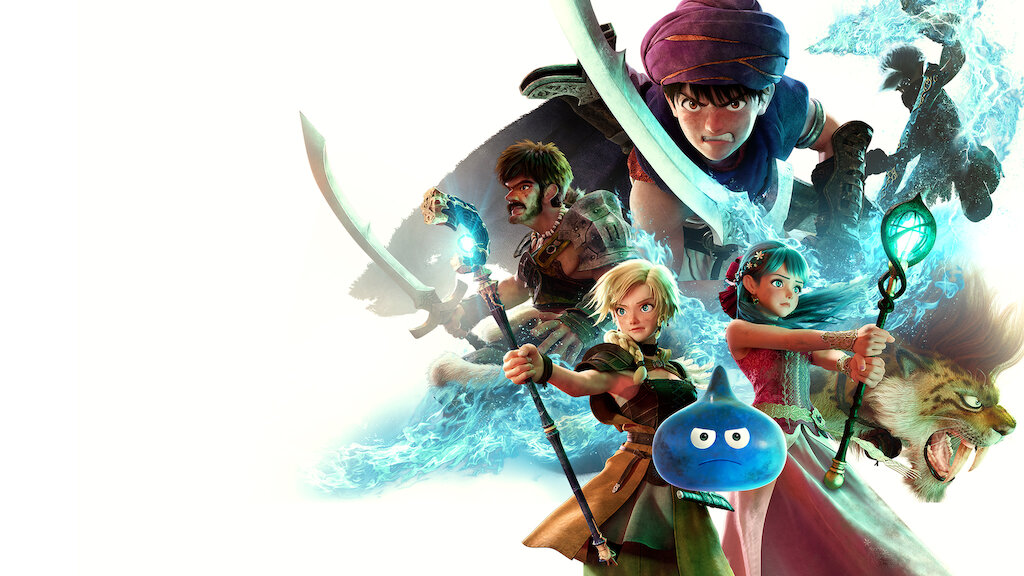 Dragon Quest: Your Story – Now, here’s a movie that was NOT well-received by reviewers, but I liked it. I have to suspect it might lose anyone who hadn’t played the source game, or at least SOME Dragon Quest game. From fans, the main complaint I’ve seen is about the ending, which I agree doesn’t work, but it doesn’t ruin the rest of it for me. It’s based on Dragon Quest V, one of the more popular entries in the series, as well as having one of the most developed plots. To sum up, the playable protagonist and his father Pankraz are traveling around seeking the legendary hero who can save the world. Bishop Ladja, an agent of evil, kills Pankraz and forces his son into slavery, building an elaborate temple for the villains.

Ten years later, he escapes, marries one of two women (three in the DS version), and has two kids, one of whom turns out to be the legendary hero. Since it’s a role-playing game, most of the gameplay consists of grinding, exploring towns and dungeons, gaining new equipment, and going on sub-quests. Since I’m not sure that would make for a good movie, it was streamlined quite a bit, but mostly in ways that worked. It starts with some footage from the actual game (the original Super Famicom version, which we Americans never got) that sums up the beginning of the story, then switches to a computer-animated style. After escaping from the Crocodilopolis, the protagonist, here named Luca Erkel Gotha, makes his way to Mostroferrato. Here, the wealthy Rodrigo Briscoletti has offered his daughter Nera’s hand in marriage to whomever can defeat Bjorn the Behemoose, a monster who’s attacked the town and stolen the Zenithian Sword. These are all elements from the game, but they took place in a different order and were more spread out there. Luca defeats Bjorn with help from his childhood friend Bianca, their old pet sabrecat Purrcy, and a Slime named Gootrude. After Bjorn is defeated, he decides to surrender rather than die, and later helps Luca. This doesn’t happen in the game, but it fits a mechanic that does, where you can recruit defeated monsters to join your party. While Luca likes Nera, he comes to realize that he has feelings for Bianca, and marries her instead. I can’t say I blame him, as the movie establishes her as a very appealing character in her fairly short screen time.

Luca comes across as a bit gullible in this part, as he’s impressed by a witch knowing he’s about to get married when she’s staying at the inn where other people are celebrating that very thing, then he drinks a potion she gives him without having it checked out first. I guess it makes sense with video game logic, since presumably the worst that could happen if the potion IS dangerous would be having to revert to the last save. But anyway, what follows is largely the same as in the game, but with some significant omissions. Luca never finds out that he’s the heir to the throne of the Kingdom of Gotha, even though there’s a brief mention of Pankraz being a king in the game footage at the beginning. I could see the fact that this plot element is never addressed in the movie being confusing to a viewer who doesn’t know the story from the game. Also, Luca and Bianca have only one child, a son named Alus, which is also the official unofficial name (it’s kind of complicated) for the hero in DQ7. I can see why they wouldn’t want to bring in two new characters this late in the story, even though it works in the game because it’s less concerned with pacing, and because it means two new party members instead of just one. The characters defeat Ladja, then encounter what’s supposed to be Grandmaster Nimzo, the game’s final boss; but instead is a computer virus. See, the whole thing takes place in a virtual reality game based on DQ5, and someone has hacked it because they think video games are a waste of time. As fan of fantasy and video games growing up, I’ve certainly encountered people who thought that, but none of them hacked an insanely complicated computer system (this is pretty much Star Trek Holodeck level here, albeit without the physical components) just to mess with someone (at least as far as I know). And while we see the guy playing the game, the hacker remains a nonentity. If they had to include this plot element (and I don’t see why they did), shouldn’t they have at least explored how even the most hardened opponent of video games would likely think RUINING games is a much bigger waste of time? Incidentally, I recently listened to something that mentioned the strange Game Boy comics from the Nintendo Comics System, where one of the main characters was a psychopath named Herman Smirch who, for some reason, thought it was hilarious to get to the final boss in Super Mario Land and then die, because he hates Mario. 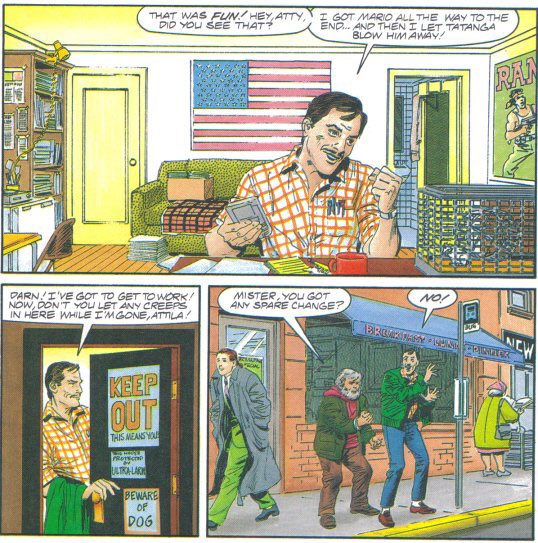 Video game promotional materials have odd ideas about people who don’t enjoy their products. I also thought the virtual reality element might have been intended as a defense against people who might question why they’re making a movie of a game that came out eighteen years ago. So yeah, that was pretty awkwardly done, but it didn’t change the fact that we got a fun and engaging look at the DQ universe and its characters, monsters, and magic. There were a lot of cute details, including Luca literally following in Pankraz’ footsteps (in the snow), his very ineffectively fighting Metal Slimes, his relationship with Bianca, and the use of a lot of magic spells from the game. Even Bjorn looked kind of adorable.

I noticed that the English voice actors didn’t use the comically exaggerated accents from the DS translation. That also means Dr. Agon didn’t talk like Ned Flanders, although he still had his moments of charming goofiness. I was a bit disappointed that they didn’t go with the chess theme that many of the boss monsters had in the game, but oh well.

Lady Bird – I remember seeing previews for this with Beth when we were watching something at the theater back in 2017. It might have been the same time when we saw ones for The Florida Project and Three Billboards Outside Ebbing, Missouri, and she expressed interest in all of them. Lady Bird is a slice of life sort of film, with no real overarching point that I noticed, just about the coming of age of a stubborn girl who argues a lot with her equally stubborn mom. Director Greta Gerwig said the name “Lady Bird,” which is what Saoirse Ronan’s character prefers to use instead of Christine, just came to her. I wonder if she was subconsciously thinking of the “Ladybird, ladybird, fly away home” rhyme, although Lady Bird’s main desire is to get away from home, which is Sacramento. I have to say it came across as looking pretty nice in the movie, although I guess familiarity can breed contempt. The film chronicles the character’s relationships with her family, her best friend, and two boyfriends, the first a nice guy who turns out to be gay, and the other a jerk to whom she loses her virginity. I kind of wondered if she’d get pregnant, especially since an earlier scene had her making snarky comments during an anti-abortion assembly at her Catholic high school, but it didn’t go there. I have to admit I have a hard time identifying with rebellious teen characters, as while I certainly had my share of arguments with my parents, I rarely was the sort to do reckless things just to lash out. But the movie was pretty interesting, and devoted a lot of time to characters other than Lady Bird herself.