When I Get to the Bottom, I Go Back to the Top of the Slide

I recently saw an update from Amanda Palmer where she mentioned playing Snakes and Ladders with her son, apparently what you do when your husband leaves you in the middle of a pandemic, or something. But what I actually wanted to talk about is the game itself, which I learned was invented centuries ago in India. I don’t think I’ve ever really written about the history of this game, largely because I hadn’t even heard about it. I did mention it in conjunction with Candy Land as a consistently popular game with young children, both games being based entirely on luck, and mechanisms that send you back and forth along the board entirely at random. They’re a little frustrating in that respect; as a kid (and really still today), I generally wasn’t someone who much cared if I won as long as I made a decent showing, and in these games you often don’t by no fault of your own. The one I played was Milton Bradley’s Chutes and Ladders, but there’s not much of a difference other than the illustrations. The reason for the switch is apparently just that American test audiences thought the snakes were too scary. In a way, the chutes make a little more sense as the opposite of ladders, because when does anyone fall down a snake’s body, except possibly in cartoons? But then, sliding boards are supposed to be fun, so why would they be a punishment in the game? Regardless, the earliest known versions of the game use snakes to send the player backwards, although there’s some speculation that these derived from simpler charts that just used lines. It also appears that the moral instructions have been a key part of the game from the beginning, when it really seemed more likely to me that those were tacked on at the insistence of parents’ groups like the lessons at the end of G.I. Joe cartoons. But no, what I’ve seen online indicates that it was originally used for religious instruction, informing people of virtues and vices, and how they can send you closer to or farther away from enlightenment. Gyan Chaupar (Game of Knowledge), or Moksha Patam (Ladder to Salvation), is often attributed to the thirteenth-century poet Gyandev, but there are references that suggest it might be even older than that. Each space, even the ones that don’t have a snake or a ladder, is labeled and/or illustrated with a concept relevant to karma and destiny, and sometimes with specific gods or demons. 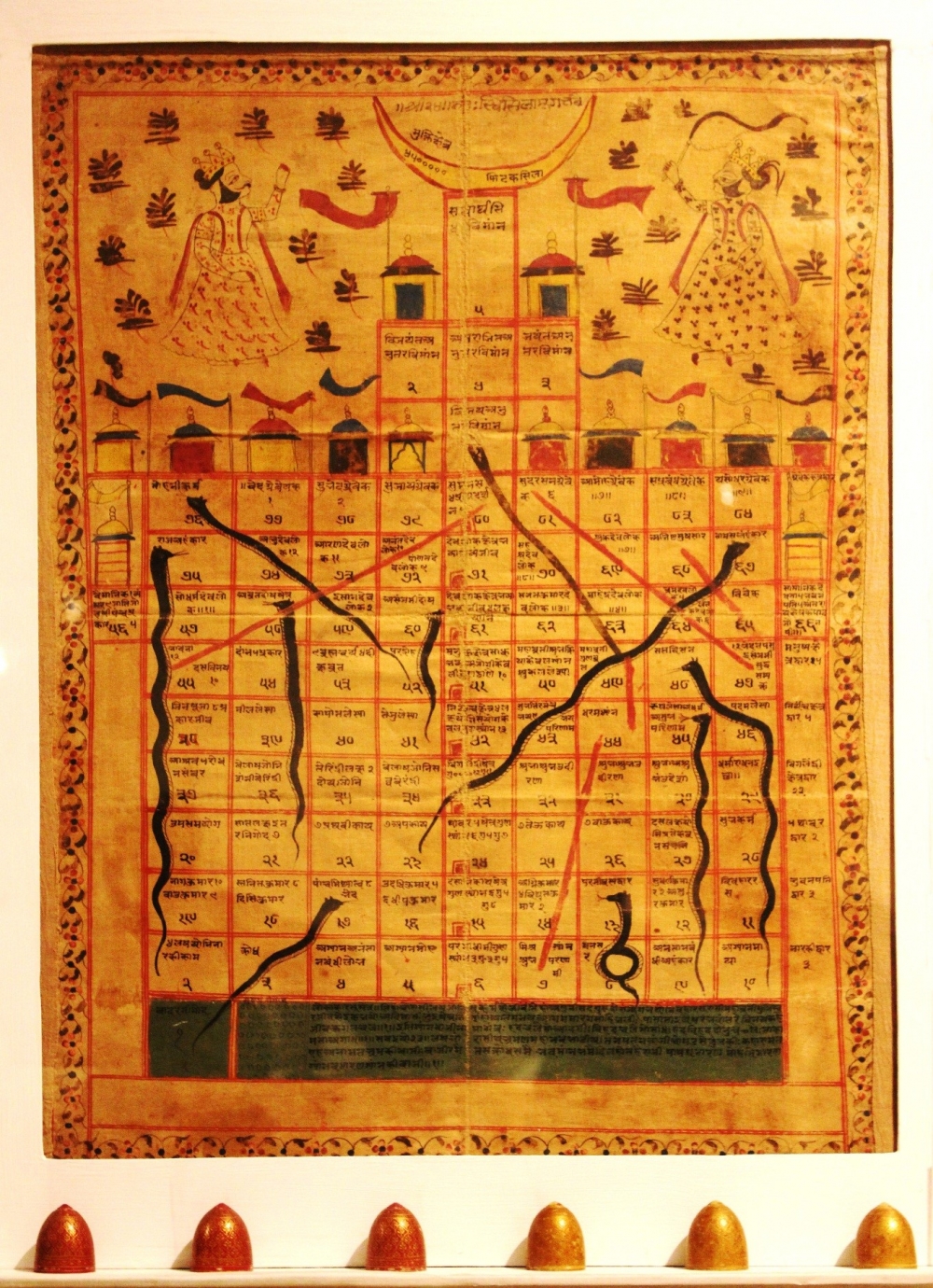 The board represented the advance of a human through various states. It was adapted to different religious traditions, including Jainism, Hinduism, and Islam. The Indian versions tended to have more snakes than ladders, representing how difficult human advancement toward the ideal is. And since it’s all based on luck, it’s fatalistic in its outlook; there’s nothing you can do to avoid misfortune. This is in contrast to Pachisi, another Indian game that does rely on the roll of the dice, but also involves conscious strategy in that you can choose which of multiple pieces to move at a given time. Strictly speaking, the fatalistic take doesn’t always make sense. If the vices include murder and theft, those generally are things that require some conscious action, not just stuff that happens randomly. The game was brought to England in the nineteenth century as part of colonization, and there took on more Victorian values. 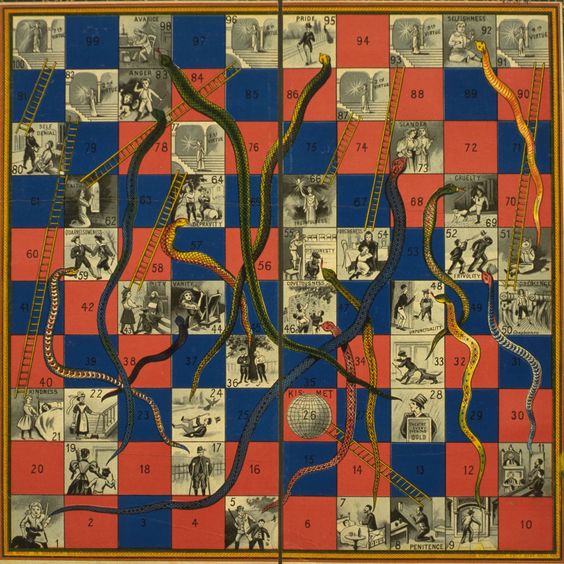 By the time India gained independence, the Indian associations were generally removed from British versions. The spaces still show good deeds and bad deeds leading to each ladder or snake/chute, but the experience is much looser, with the spaces that don’t require movement remaining blank. 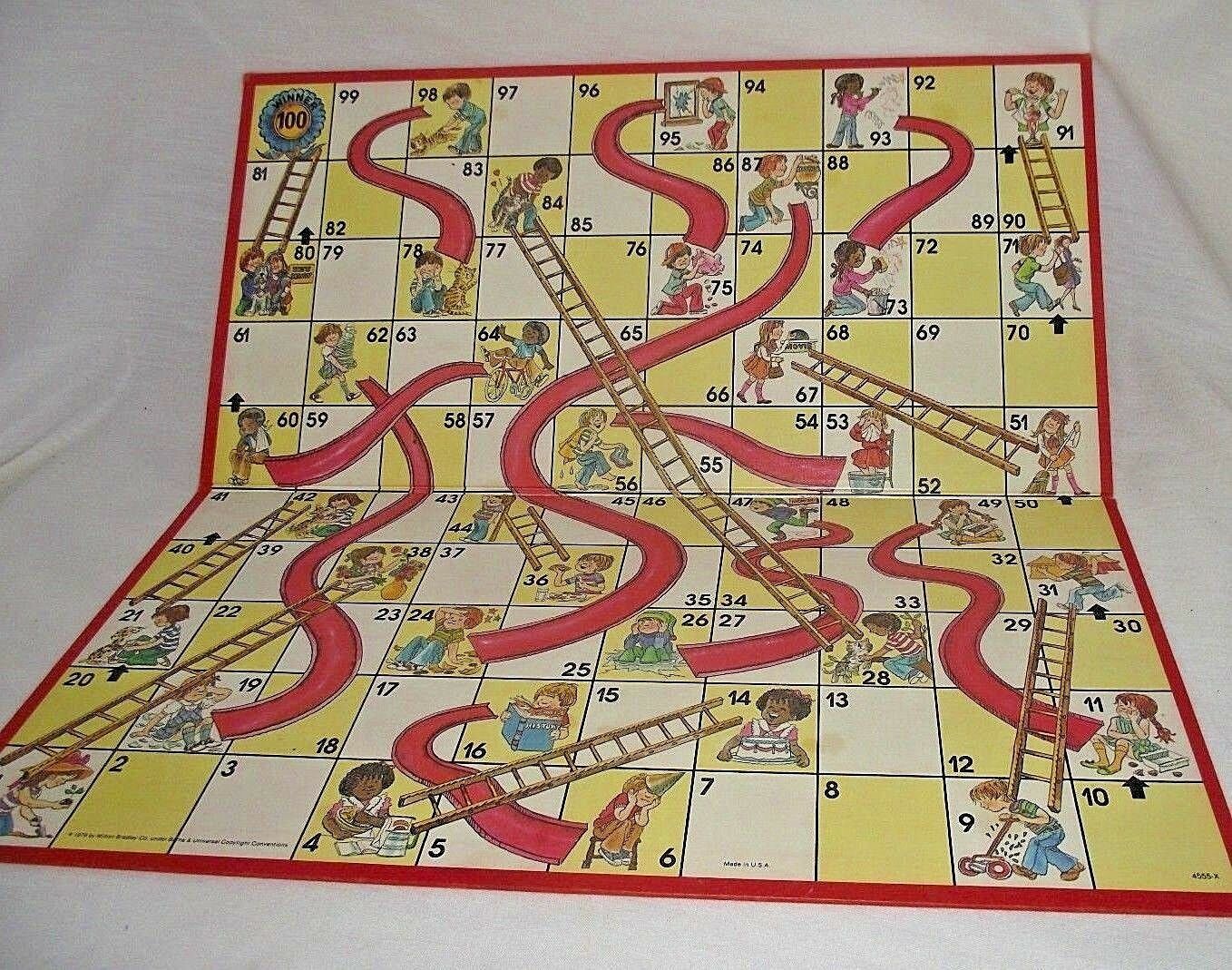 I don’t even know that how far you go forwards or backwards really has that much to do with the intensity of the good or bad deed, although I’m sure it varies from one version to another. I think the longest slide when I used to play it was a kid breaking a cookie jar, which, while certainly not a good thing to do, isn’t that significant in the grand scheme of things unless the jar was an antique. There are also simpler versions that don’t include the moral elements at all.