From the Animated Arcade Archive

I’ve already looked at the Saturday Supercade Donkey Kong cartoons, but I wanted to talk a bit about the others as well. They certainly went all out as far as games they covered, with a grand total of seven over two seasons, some of them largely forgotten as far as I can tell. 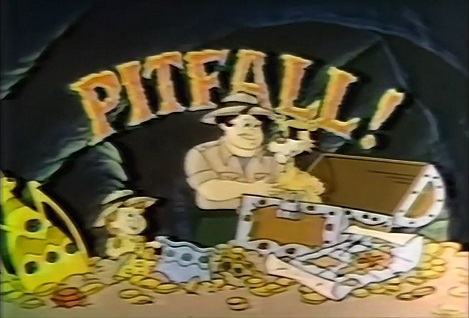 I’ve only found a single Pitfall episode online, so I don’t know that I can judge the show as a whole, but it’s interesting that the extra characters in the show actually appeared in the game’s sequel. That’s like Oogtar showing up in the next Mario game after the Super Mario World cartoon. One of the characters, Quickclaw, is a mountain lion who’s terrified of everything, very much the same type as the Cowardly Lion, Snagglepuss, or Cringer from Masters of the Universe, including the gay-coded voice the first two have. Here’s what he looks like on the Atari. There are quite a few Q*bert episodes available to watch, but I can’t say the segments are all that interesting. I realize that most of these games didn’t really have plots, and even the ones that did wouldn’t necessarily translate to ten-minute cartoons, but I still have to wonder how they came up with some of the combinations they use. The little orange creature with the big nose who jumps up staircases and curses a lot lives in the equivalent of 1950s suburbia, with a little bit of 80s (or, as it was called at the time, “now”) thrown in. That said, the show DOES include all of the characters and situations from the game, and then some. Most of the characters are of Q*bert’s species, here called Nosers. Coily the snake is Q*bert’s rival and the leader of a gang consisting of Ugg and Wrongway, and there’s another snake, Viper, who’s his girlfriend. 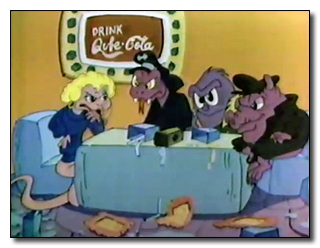 Slick and Sam are friends of Q*bert’s, but tend to be careless. Most episodes have a chase scene where Q*bert jumps on blocks or something else and changes their color. He also uses a projectile called Slippy Doos (for some reason, that name makes me uncomfortable) to trip up his pursuers. Q*bert doesn’t use any such thing in the game, but the original plan was to have him shoot something out of his nose. The working title was even Snots and Boogers. He does the symbol-cursing as well. 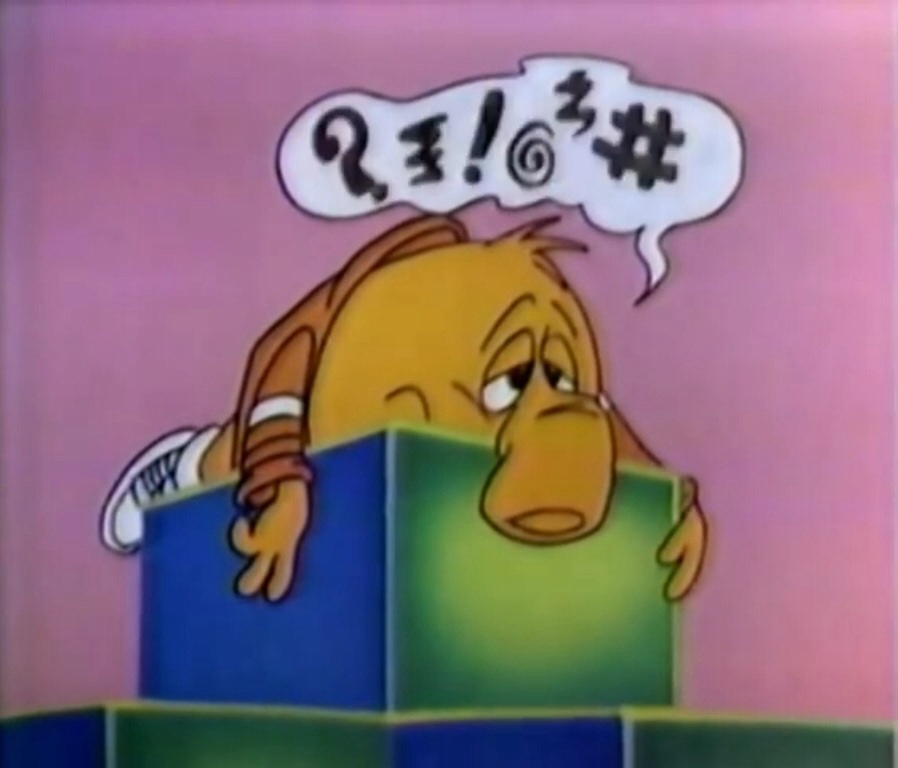 I kind of prefer him when he can only talk in that way, like in Wreck-It Ralph, but I don’t know that this was ever official for the character.

Q*bert’s friends and family all have Q at the beginnings of their names, as does pretty much everything else.

The weirdest example of this is when a record store has an advertisement for Quran Quran, presumably a play on Duran Duran, but did they not realize that this is also the Islamic holy book?

Most of the episodes were typical sitcom plots, but there was also one with a mermaid and another where they meet aliens on the Q*Moon.

Frogger only ran for one season, and once again it’s a strange mix of elements from the game with stuff that has nothing to do with it. Frogger is a reporter for a newspaper called the Swamp Gazette, working with Fanny Frog and Shellshock Turtle. Shelly is the cowardly one of the group, but also useful because of how much stuff he keeps inside his shell, including the air pump with which he inflates Frogger when he’s deflated. The relationship between the animal and human worlds isn’t entirely clear. Like, people think it’s kind of weird when frogs talk to them, but aren’t freaked out by it. Apparently animals in this world CAN communicate quite easily with humans, but usually don’t, the main characters being exceptions because they need to interview people for their stories. As with several of the other cartoons, there’s a clear Scooby-Doo element in that the villains are often people wearing disguises in order to perpetrate some sort of crime. 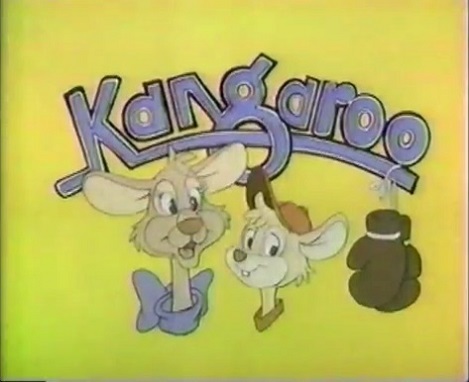 Kangaroo is not a game I was familiar with, but I looked it up and it’s a platformer much in the style of Donkey Kong, with the kangaroo protagonist having to climb to the top of the screen to rescue her baby, with monkeys throwing fruit at her along the way. She can jump (well, obviously) and use her boxing gloves to punch out the sinister simians. This was a second-season inclusion without that many episodes,and I only could find a few of those. The general premise is that it takes place in a zoo, and the monkeys are constantly escaping from their cage and causing trouble, with Katy and Joey Kangaroo having to stop them. Once again, the animals are able to talk to people, and everyone takes this in stride. 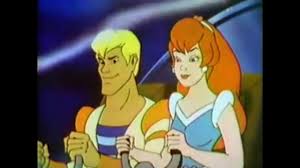 I’ve seen a little more of Space Ace, another second-season cartoon based on a game I didn’t know. It’s sort of a follow-up to Dragon’s Lair, also with animation directed by Don Bluth. The appearance has a lot of Star Wars influence, including a trench run.

It’s a short playthrough, but I understand it’s REALLY easy to die.
The hero, Dexter, is hit by the villain Borf’s Infanto-Ray, which he’s planning to use to turn everyone on Earth into babies. Dexter doesn’t get a full dose, so he becomes a wimpy adolescent. There are power-ups throughout that will let him temporarily turn back into his super-muscular adult form. The damsel in distress is Dexter’s sidekick Kimberly, who’s basically Princess Daphne from Dragon’s Lair with red hair. 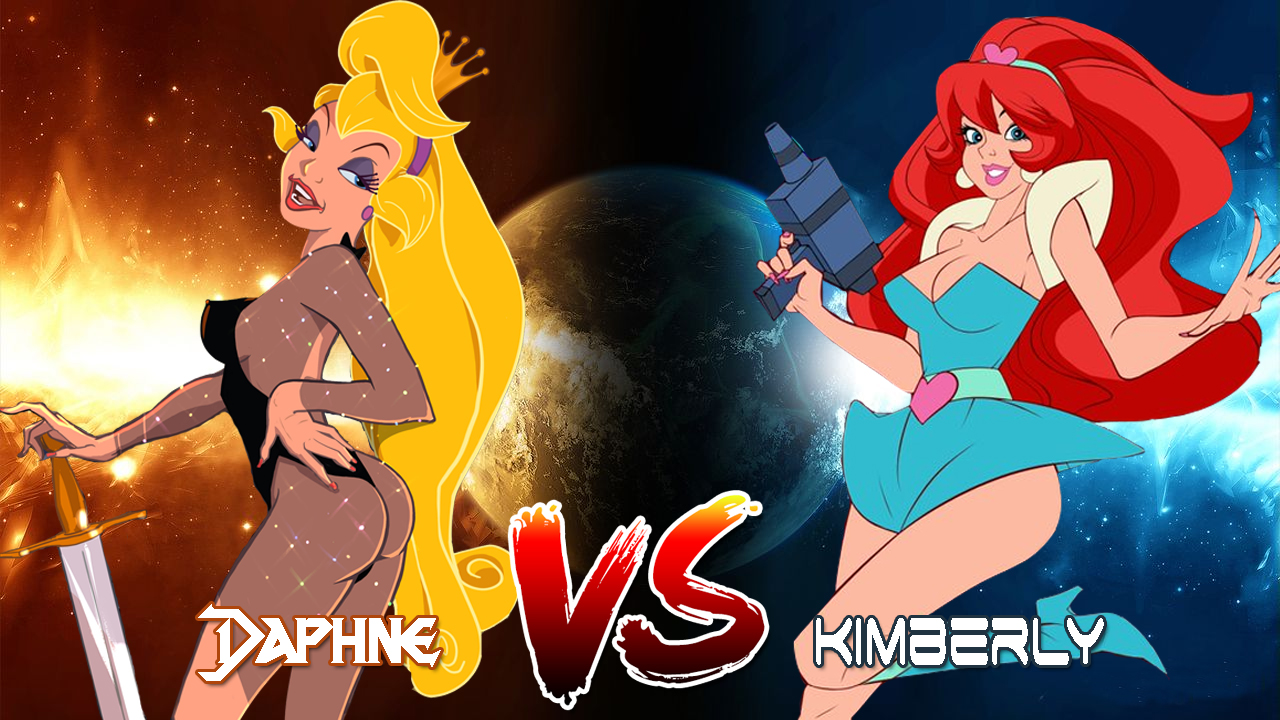 She’s kind of similar to Princess Lana from Captain N, too. The style for 80s cartoon women was skimpy clothes and a ponytail.

The series is pretty close in its style, although Bluth wasn’t involved and the animation has a slower pace. Dexter is usually in adult form, but turns into his younger self at random, or more accurately when it’s least convenient for him. Kimberly is active in the stories instead of having to be rescued, which I guess is pretty common for video game cartoons. Pauline, Princess Toadstool (as she was known back then), and Zelda are all significant participants in their respective shows, even if they do get kidnapped at times. So is Joey in Kangaroo, although he’s not a damsel. Dexter and Kimberly’s boss, Space Marshall Vaughn, is unaware of the former’s problem, so when he wimps out, she pretends he’s her little brother. I think Kimberly is drawn as very cute in the show, but in a way that isn’t as sexualized as in the game.

Even though Dexter wasn’t really Kimmy’s brother on the show, they did seem to have sort of a sibling dynamic, unlike how they were apparently a couple in the game. Or at least HE seemed to think they were a couple, but there are some creepy implications to being in a romantic relationship with a guy who randomly becomes underage at times. But then, if Pauline was really changed from Mario’s girlfriend to his niece, that fits. I’m pretty sure kids understand the concept of dating, Ruby-Spears.

Are there any other video game related shows I should watch? As you can tell from what I’ve written about before, they don’t necessarily have to be good. I know there’s a much more adult Castlevania series on Netflix. I’m not that familiar with the series, although I do remember watching my brother play 2 and 3.

2 Responses to From the Animated Arcade Archive