It’s a Mad, Mad, Mad, Mad World – This was a quite ambitious movie for its time, bringing together many of the most famous comic actors of the time. Milton Berle, Sid Caesar, Buddy Hackett, Jonathan Winters, Mickey Rooney, Phil Silvers, and Terry-Thomas all play major roles; and many other comedians have cameo appearances, some very brief and others more significant. I’m not that familiar with all of them, but I was certainly aware that there were some pretty big stars involved. One actor I didn’t realize I’d seen before but actually had was Dick Shawn, who here is Berle’s character’s idiot brother-in-law, and was also the hippie who played Hitler in The Producers. They’re largely the same character, really. The plot starts with a dying burglar, played by Jimmy Durante, revealing the location of a bunch of money he hid to a few people who stop to help him, who can’t agree on how to split the loot, so they all take measures to get there first. Spencer Tracy plays a police chief who had been working on the crook’s case, and tracks all of the treasure hunters, eventually trying to escape with all the money himself. There are a lot of car and plane stunts along the way, and obviously plenty of both physical and spoken comedy. There were some bits that I feel went on rather too long, perhaps partially because there was a lot of restored footage on the DVD release, but apparently even contemporary critics said this. It’s so packed full of gags that, even if one doesn’t work, you might like the next one. One reason I thought I should see this, other than just being a significant comedy film, was how often it’s referenced elsewhere. I guess I’m mostly thinking of the bit in the Simpsons episode “Homer the Vigilante” that briefly reenacts the film, including a recreation of a kid tricking Silvers into driving into a river, only with Bart as the kid.

I also remember an episode of the Beetlejuice cartoon where most of the show’s recurring characters raced each other to find an island with a giant ape. Interestingly, in both of these parodies, the treasure turned out to be a hoax, while in the original movie the money was real, but none of the leads ended up with any of it. Even Follow That Bird seems to have taken inspiration from it, especially the scene of Bert and Ernie in the biplane. 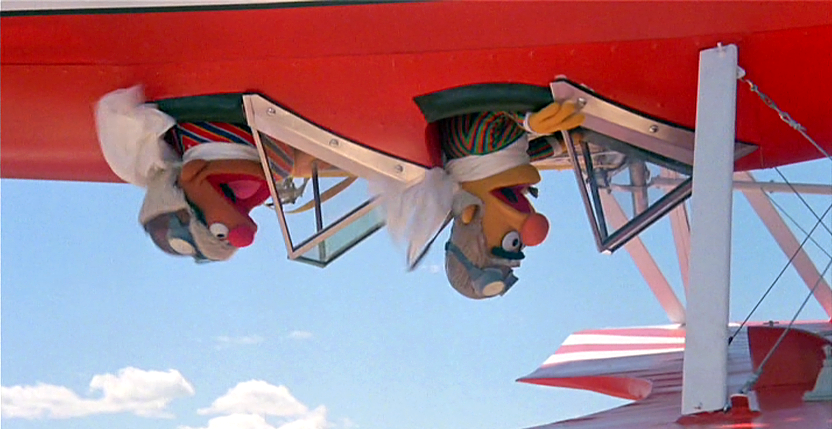 I remember, on the Simpsons commentary, Matt Groening (or maybe someone else, but I think it was him) talked about how he saw the movie as a kid and was excited to see the Three Stooges’ cameo, which ended up being a very short scene where they’re dressed as firemen. They were very recognizable, though, and apparently got a lot of applause in theaters.

Curly Joe Derita was the third Stooge here, as this was after Curly and Shemp had died. Joe Besser was still alive, and was actually offered a different role in the film, although he ended up not being able to take it. I didn’t notice Stan Freberg, who has a non-speaking role as a deputy, and I think his voice also can be heard on a police radio.

He did a radio spot for the movie in which he claimed it was funnier than Cleopatra.

I understand the big W was actually in a private park in Rancho Palos Verdes, although it’s no longer standing. Hackett and Rooney land Jim Backus’ plane at Rancho Conejo, an actual airport at the time. The fictional Santa Rosita is shown at one point to be south of San Diego, which would mean it’s on the opposite side of Los Angeles from that airport.