One thing I was reminded of in response to my recent post on Satanic panic was that there were some people who genuinely did do horrible things due to what they thought were messages from the Devil or some other supernatural power. The panic wasn’t that long after Charles Manson thought “Helter Skelter” was about race war and David Berkowitz thought a dog was telling him to kill people. That doesn’t really sound like something a dog would say. Maybe he misheard, and the dog actually told him to kill squirrels. Richard Ramirez, an active serial killer around the height of the panic, is known to have practiced Satanism. Obviously these murderers had other problems as well, but there probably are times when people devoting themselves to evil should be a genuine warning sign. On a personal level, I don’t generally find occult symbolism scary, but Nazi imagery is viscerally disturbing even when used as a joke. Maybe it’s because I don’t believe demons really exist, but I do know Hitler existed. Maybe that’s not always the best standard to use, though.

Something I’d wanted to address more specifically in terms of pop culture and Satan and hidden evil is the idea of subliminal messages in music, particularly backwards recordings. Backmasking in recording dates back to the 1950s, although people knew you could play records backwards well before that. The Beatles had some backwards instrumental parts, and the end of the song “Rain” is another section of it played in reverse. It’s kind of a cool sound, really, sort of an uncanny valley thing if that exists for sound. It still sounds musical, but a little off, hence kind of dreamlike. This seems to have led to people searching for backwards messages in other Beatles songs, since they knew it was possible. But then, backwards singing sounds like audible gibberish. It’s usually not exactly hidden, as you can still recognize a human voice, although there are techniques to make it less obvious. The effort involved to make something sound intelligible both forwards AND backwards would be astronomical, but that didn’t stop people from claiming that they heard messages about Paul McCartney being dead when they played actual singing parts in reverse. A lot of the time it’s just the power of suggestion at work. “Revolution 9” was a popular candidate for hidden messages, presumably because it didn’t make any sense forwards. When the “number nine” part is reversed, it sounds kind of like “turn me on, dead man.” The “dead man” part is clearly just “rebmun,” or “number” backwards; but I’m not sure how “nine” (which really should sound about the same in reverse) becomes anything like “turn me on.” It is pronounced with what sounds like an extra syllable or two, so that probably has something to do with it. And the inner groove of Sgt. Pepper’s Lonely Hearts Club Band is a repeating loop that’s mostly unintelligible, but you can clearly hear, “Never could be any other way.” Played backwards, it famously sounds like “We’ll fuck you like we’re Superman.” Not that this even makes sense as a hidden message, as Superman is generally portrayed as a nice guy, and I don’t think we know much about his sexual habits. Still, it’s kind of eerie. While it wasn’t original with them, Camper Van Beethoven included a few recordings on their albums that were just other songs in reverse. The hidden track on Camper Vantiquities (which isn’t, for what it’s worth, on the cassette; that was how I first owned that album) that’s “I Don’t See You” backwards is called “Om Eye,” because the chorus in reverse kind of sounds like “om eye, sweet isthmus, we are one.” There are other cases where they edit a little more instead of just reversing the original, as with “Five Sticks” (based on “Ambiguity Song”), “Circles” (based on “Oh No!”), and “We’re All Wasted and We’re Wasting All Your Time” (based on “Take the Skinheads Bowling”). They Might Be Giants, another band that’s often surreal and likes to experiment with sound, unsurprisingly used backmasking at times. One of the most interesting cases is the song “On Earth My Nina,” which came about when John Linnell listened to the song “Thunderbird” backwards and sang what it sounded like that way. Oddly, the original song wasn’t released for another five years after that. 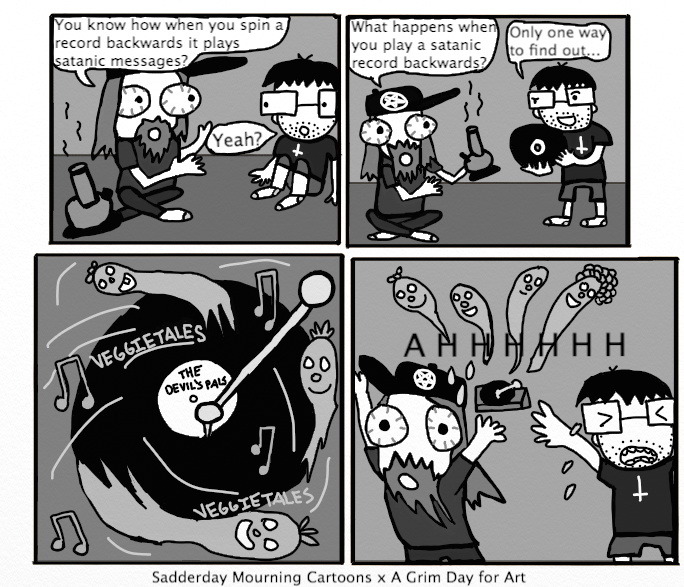 While the rumors about hidden messages in Beatles songs were supposed to be scary, I’m not sure anything thought they were Satanic, even if there was that “more popular than Jesus” overreaction. Wikipedia suggests that the idea might have come from the scene in The Exorcist where the possessed Regan speaks backwards, and while I don’t know if this is true, it sounds feasible. Aleister Crowley was apparently playing records backwards to develop his subconscious mind well before that, though. Would a backwards message even work as subliminal? I’m not sure that’s how the human mind processes sound. Maybe someone learned about how the retina turns images upside down and figured it was the same with ears. There was a Michael Ian Black comedy routine where he talked about backwards messages, saying that the Devil was screwed when CDs came out, and that he thought the messages would be more effective if they were friendly instead of creepy. You catch more Lords of the Flies with honey, I suppose. After the rumors began spreading, some musicians started intentionally putting in backmasked lines about the Devil, often humorous ones. Weird Al fans probably know about the backwards “Satan eats Cheese Whiz” in “Nature Trail to Hell.” There have also been cases where bands used backmasking to slip in profanity. And the Simpsons episode “New Kids on the Blecch” had Bart joining a boy band whose songs had subliminal recruitment messages for the Navy, but for some reason the phrase “Yvan eht nioj” was sung backwards phonetically instead of actually reversed. 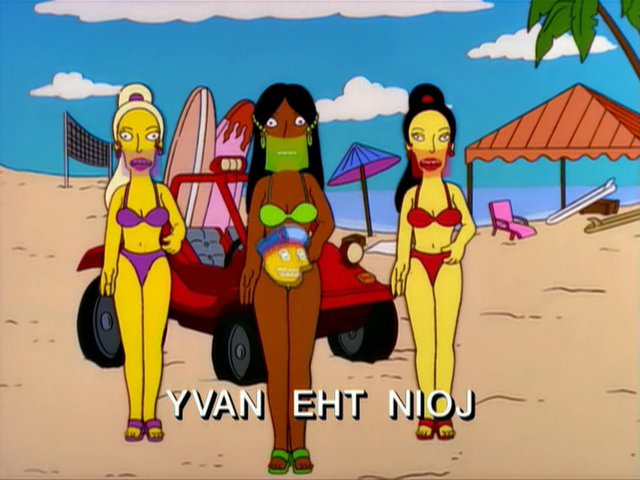 I guess part of the joke was how incredibly obvious the secret message was, but it seemed a bit dumbed down to me. I mostly had cassettes growing up, so it wasn’t until I had a computer with an Internet connection that I could listen to anything in reverse. I’m not sure whether that makes me more or less susceptible to the Devil. 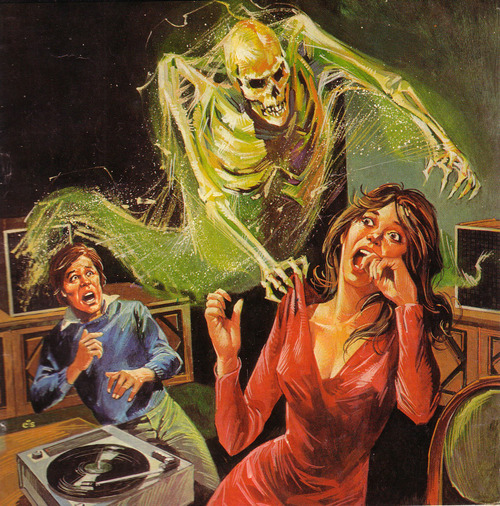