Having read this post on Tor the other day, I was inspired to look up more information on the legendary Persian hero Rostam, sometimes spelled Rustam. By searching on Google, I discovered that Rostam is also the name of a guy who was in the band Vampire Weekend, which makes sense as his parents are Iranian. Stories about him are collected in the Shahnameh, an Iranian epic poem written by Ferdowsi in the late tenth and early eleventh centuries. It mixes mythical and actual history, the latter appearing more often toward the end, and I believe it ends with the conquest of Persia by the Arabs in the seventh century. The tales of Rostam are thought to have originated in the time of the Parthian Empire, and he came from Zabulistan in modern southern Afghanistan. The hero was the son of Zal, a warrior raised by the Simurgh, and Rubadeh, Princess of Kabul. He was so big and muscular even as a baby that the Simurgh had to instruct Zal on how to perform a Caesarean section.

Rostam killed a rampaging white elephant with a club when he was about ten years old.

His horse, Rakhsh, was also quite famous, having been chosen from among many possible steeds because he was the only one who could support Rostam’s weight. This mare had the strength of an elephant and a coat like rose leaves on saffron ground, which I guess means red on yellow, although roses come in many other colors. 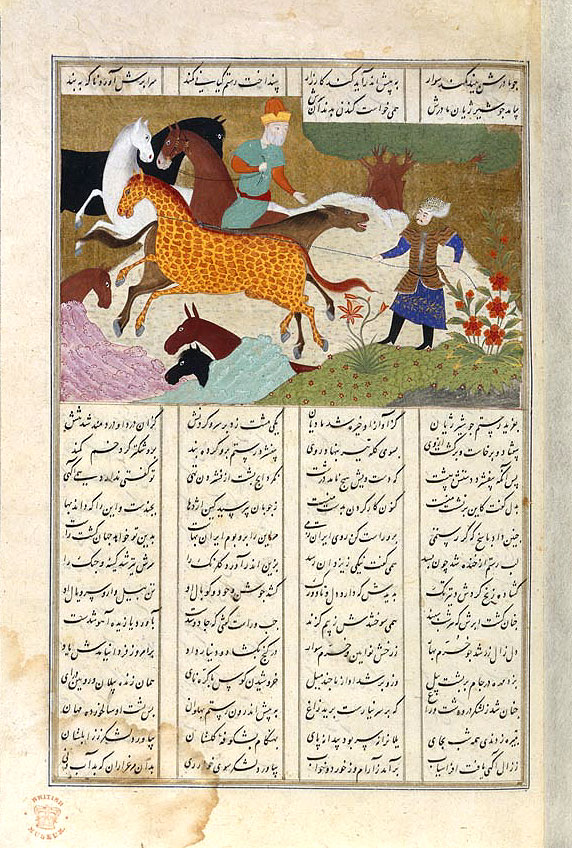 Here, he looks like a giraffe without the neck.
When the Shah Kay Kavus was captured by the white demon Div-e Sepid, who magically conjured up a storm of hail, boulders, and tree trunks in order to defeat the king’s army, Rostam set out on Rakhsh to rescue the monarch, performing seven labors along the way, including fighting a lion (well, okay, Rakhsh actually took care of that one) and a dragon, and overcoming seduction by a witch. 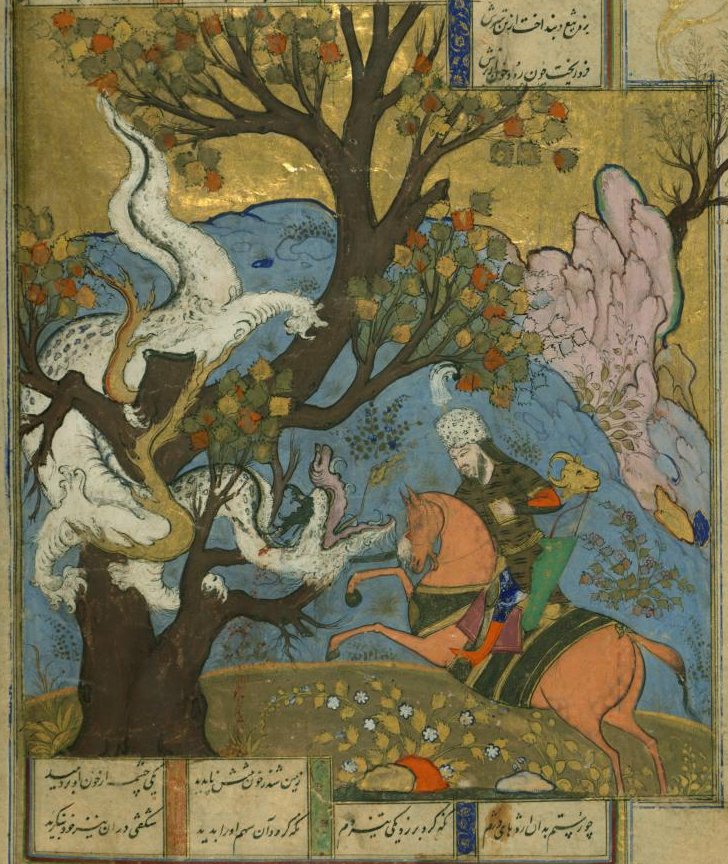 This story has, not surprisingly, been compared to that of Hercules. Rostam didn’t have as many labors as his Greek counterpart (not officially, anyway), but then he hadn’t killed his own children. Yet. That comes later. Anyway, Rostam eventually reached Div-e Sepid’s cave and, after a great struggle, killed the demon, after which he used the creature’s blood to heal the eyes of the Shah and his blinded army. He also wore the demon’s head as a helmet, perhaps to go with his coat of dragon skin.

Later on, Rostam had an affair–well, technically not really an affair, since they got married, but he never sees her again afterwards–with Princess Taminah of Samangan, leaving her a jewel for her to give any child he might have. Their son Sohrab grew up to be a warrior, and at one point met his father on the battlefield. Rostam didn’t know who he was (how would he, really?), but the matter was complicated by the hero refusing to identify himself out of fear that the supposed stranger could be an enemy. He killed Sohrab, and as he was dying, he identified himself as Rostam’s child and showed him the jewel he had inherited.

I believe the Shahnameh doesn’t mention Rostam having any other children, although other sources give him a daughter named Bonu Goshasp and a son named Faramarz. Rostam himself was eventually killed by his jealous half-brother Shaghad, who tricked the hero into falling into a pit full of poisoned spears. He got his revenge by asking Shaghad for a bow and two arrows as his last request, and while Shaghad ran away after providing them, Rostam shot down a tree that killed his treacherous brother. 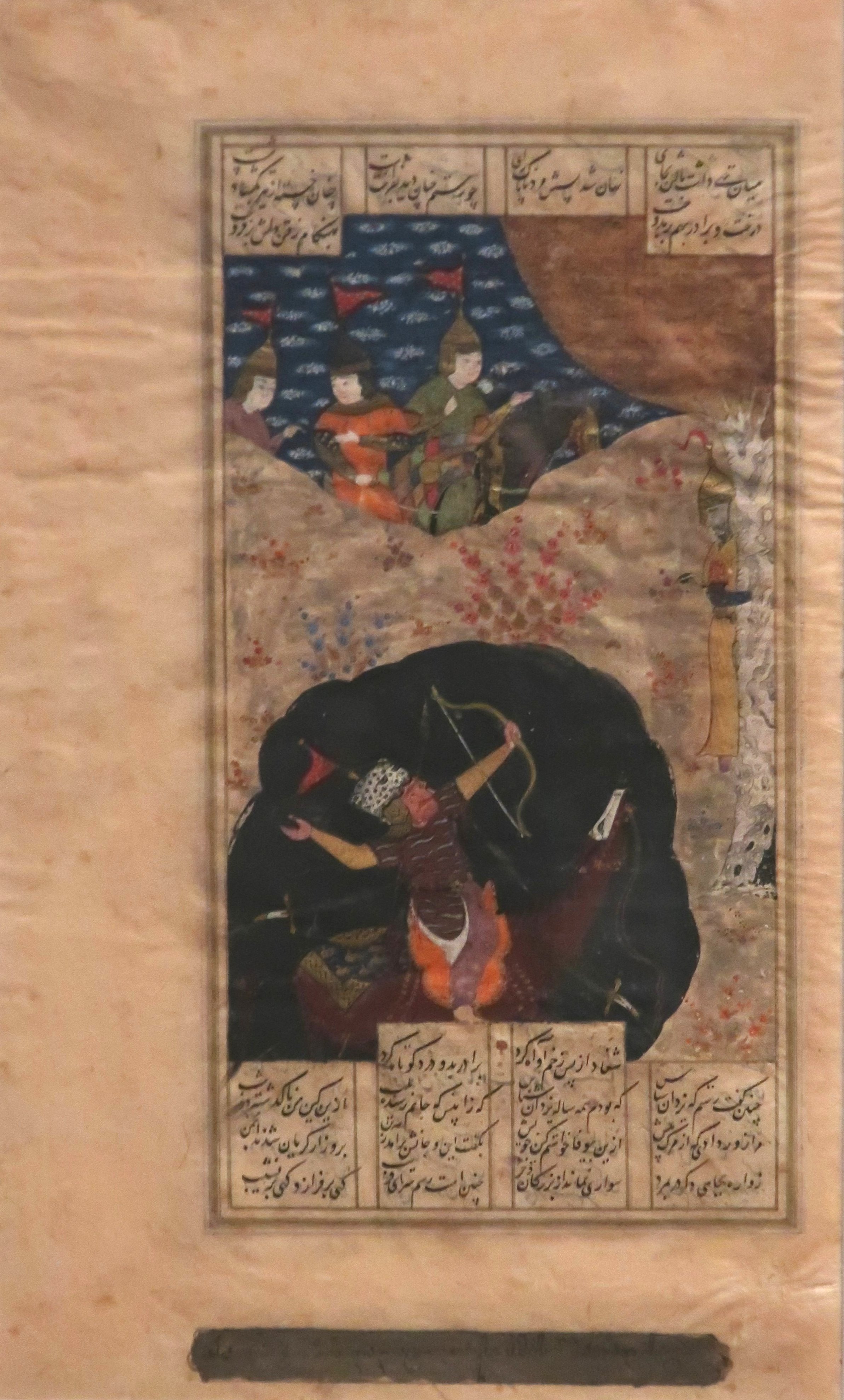 Rostam is also known for killing Esfandyar, another Persian hero who also underwent seven labors, and was famous for spreading Zoroastrianism. It seems that Esfandyar’s father, King Goshtasp, promised to give his son the throne if he could fulfill some nigh-impossible tasks, but Esfandyar always succeeded, and Goshtasp always went back on his word. Eventually, he told Esfandyar to capture Rostam, but the other hero had learned from the Simurgh that the prince was only vulnerable in his eyes, and thus managed to kill him. Seems like they might have gotten along really well if it weren’t for Goshtasp.