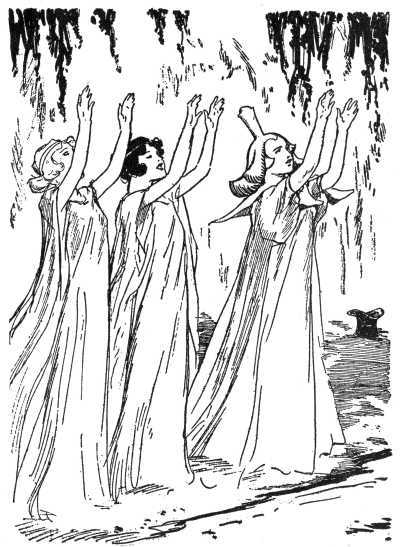 One running theme in Glinda of Oz is that there are several different types of magic in Oz, all of which have their specialties, but none of them can do everything. L. Frank Baum contrasts the fairy magic of Ozma with Glinda’s sorcery and the wizardry of the Wizard of Oz. There’s also a Yookoohoo, a Krumbic Witch, three Adepts at Magic, and two Flatheads who consider themselves a sorcerer and a witch. The distinctions aren’t always consistent, however. Glinda is referred to as a witch in Wizard, but a sorceress in later books. The Wizard started calling himself that without any knowledge of actual magic, and he learned the art from Glinda, but it’s still stated to be at least somewhat different from her sorcery. The beginning of Land mentions that Mombi wasn’t allowed to call herself a witch, but she’s often referred to as one in the text. This might be a political thing instead of an issue of power, though. Wizard introduces a country with four witches, one for each of the quadrants, two good and two wicked. Glinda and the two Wicked Witches rule their own territories, and while the book isn’t clear about the Good Witch of the North, Land informs readers that she is indeed the ruler of the Gillikin Country. And in Dorothy and the Wizard, Ozma states that Mombi was once the Wicked Witch of the North and ruler of the Gillikins until the GWN conquered her. As such, would calling herself a witch (or perhaps a capital Witch, although Baum was pretty much never consistent on such matters) not only mean she’s practicing a certain kind of magic, but that’s she still claiming a position of power in the country? The collapse of the ruling witch system might also be why Glinda stopped calling herself a witch. In Scarecrow, Blinkie is referred to as a Wicked Witch, with capital letters, but her three associates are not.

As far as ranking goes, Ruth Plumly Thompsons claims in Cowardly Lion that a Cookywitch is “next in wizardry to a sorceress,” which is confusing as witchcraft, wizardry, and sorcery are elsewhere stated to be different sorts of magic.

Thompson was often even more careless than Baum with these labels, though. She frequently uses “necromancer” as a term for any magic-worker, even though we don’t see any of them communicating with the dead. From context, I’d say it’s more likely that a Cookywitch is a witch who specializes in cooking and related activities.

Robert Pattrick’s essay “Oz Magic,” which can be found in Unexplored Territory, attempts to sort the different sorts of magic-workers into categories. He classifies witches and magicians as general practitioners, while other types are specialists, and wizards skilled in all sorts. The term “sorcery” comes from a Latin root meaning “fate,” from a term referring to casting lots. I understand that, in Dungeons & Dragons classes, a sorcerer practices intuitive magic, rather than studying it from books. That doesn’t really fit Glinda, as she’s constantly reading and studying. 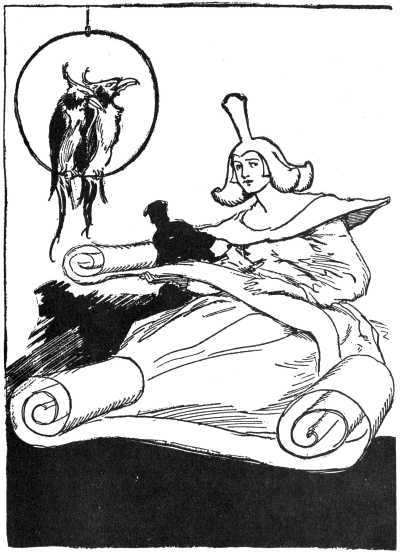 Only fairies are specifically said to have inborn magical powers in the Oz series, although it’s possible that some humans are more naturally inclined to the art than others. In Paul Dana’s books, Yookoohoos have some level of inborn magic in transformations. Pattrick links sorcery to divination, pointing out that Glinda does this sort of thing with the Great Book of Records. Of course, she’s also a powerful all-around magic-worker. As far as other characters referred to by this title (male or female), Gwig can be linked to the fate/lots definition as making predictions is part of his job, although he’s pretty much always wrong and constantly backpedaling. We don’t know how he got his magic, but the fact that his spiky body is different from other Mangaboos might indicate that he was born into the role. The Wizard tells Gwig that a wizard is worth three sorcerers, obviously a bluff on his part, but it does fit with the implication in Land that a wizardess is somehow more than a sorceress. We don’t really know much about the powers of Gayelette or the Supreme Dictator of the Flatheads, and Soob the Sorcerer is only mentioned in Gnome King as the former owner of the casket Peter Brown finds on the pirate ship. When I used Soob as a character, I did try to make him a little more of a mystical and spiritual sort of magic-user than is common for Oz. While the Three Adepts are usually just called Adepts at Magic, Lady Aurex refers to them as Adepts at Sorcery, so they might also count in this category. While the term “adept” is pretty generic, it’s used as a more specific title within Theosophy. The Adepts say their magic was gleaned from Nature. Queen Coo-ee-oh, self-identified as the world’s only Krumbic Witch, learned most of her magic from them, but she combines it with her own skill in machinery. 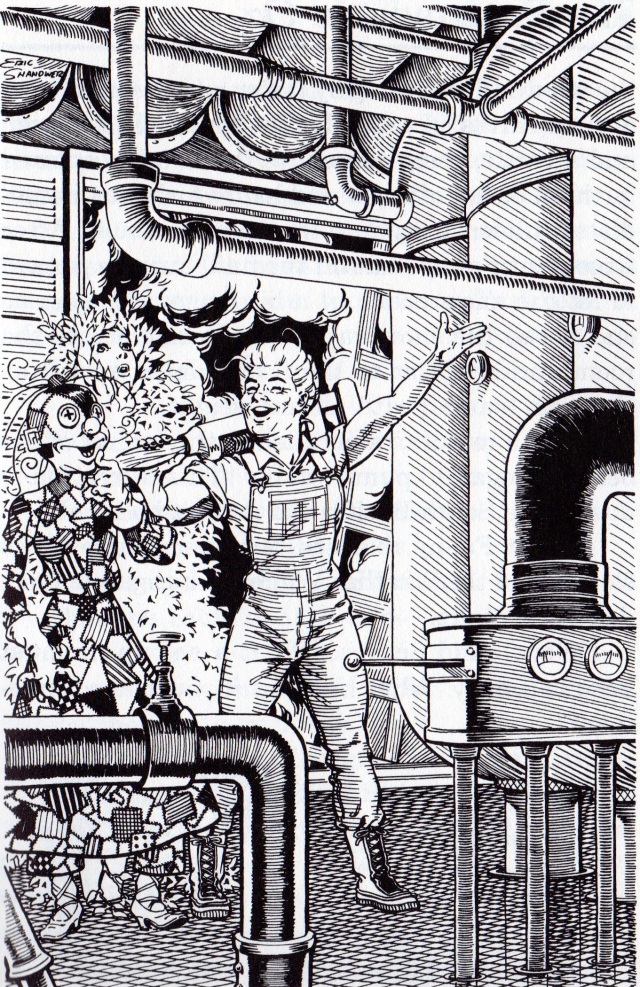 There does seem to be somewhat of a theme of wizards using tools and often having mechanical knowledge. The Wizard of Oz himself becomes an inventor of note after learning magic, and carries a bag of tools.

Jinnicky, Potaroo, Waddy, and Wutz from Thompson’s books all fit into this category, as does Jack Snow’s Conjo.

Jinnicky is also said to be a jinn, a sort of inherently magical being, but I’ve come to think that this is probably just honorary. Pattrick’s own story, “Glinda and the Red Jinn,” identifies him as a small-time human magician who takes on some attributes of a jinn when he learns wizardry from Glinda. 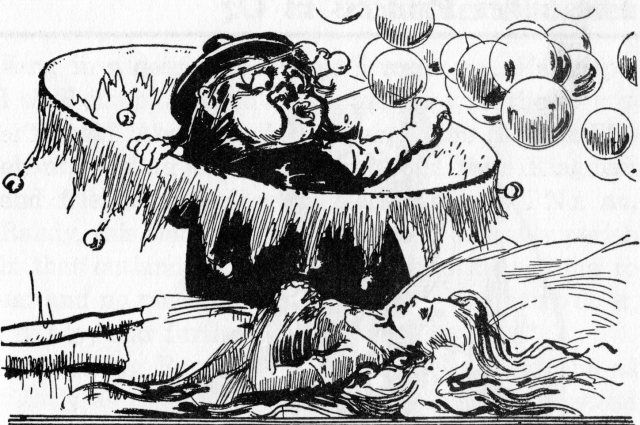 Ozwoz also works with machines, but calls himself a wozard instead of a wizard. Kadj the Conjurer, whose cave is visited in Pirates although he himself never appears, also seems to be an inventor who uses tools, so his title seems to be more for variety than anything else. I’ve considered that conjurers could be magic-workers trained by Conjo. Not all of the magic wizards perform is tool-based, and they aren’t the only ones who use magical tools, but it seems more integral to their magic than to those of other types. Dr. Pipt, Ugu, and Mooj are simply referred to as magicians, although Ugu is said to be descended from “the greatest wizard and sorcerer who has ever lived.” Pipt could perhaps be termed an alchemist, as he’s best known for mixing potions and powders. 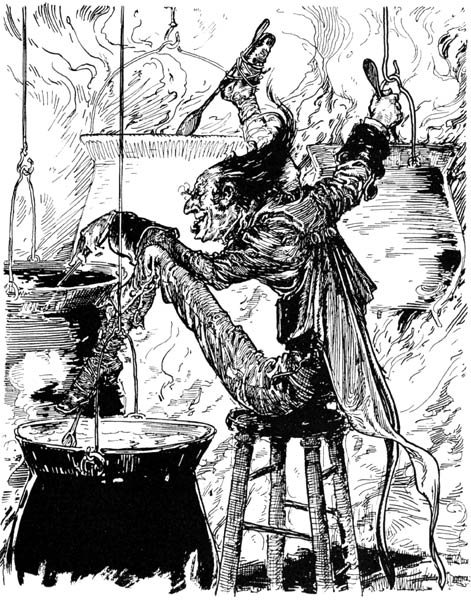 Some magic-workers specialize in prophecy and prediction, although they sometimes have other powers as well. Abrog from Grampa, for instance, is both a prophet and a wizard; and Akbad from Giant Horse knows some magic phrases and incantations, and is at one point said to be “feverishly thumbing over an old book of Necromancy.” Baron Belfaygor of Bourne employs a mesmerizer who gives his master a magical beard that never stops growing. Wumbo in Gnome King is called a Wonder Worker, not a title we really know anything about, but he specializes in magical chants. I’m inclined to think these titles are often just what the magic-users decide to call themselves, although there often seems to be at least some meaning to them.